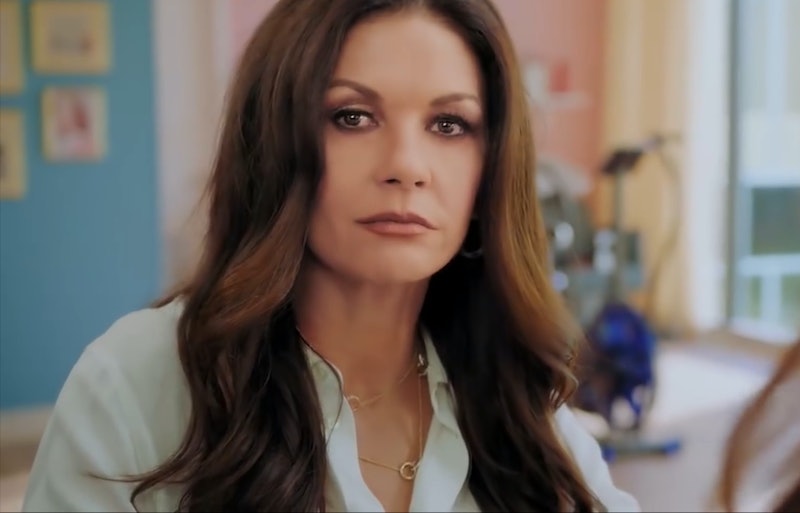 Catherine Zeta-Jones is a veteran actor who’s got the chops to dive headfirst into any character’s shoes, and with Facebook Watch’s Queen America, she’s taking on a particularly troubling persona. The 10-episode series focuses on Vicki Ellis, a ruthless pageant coach who won’t let any girls under her watch slack as they compete for the crown. Old school beauty queens and pageants have been spoofed and documented for years, and there’s plenty of authentic material to draw upon, but right now it doesn’t look like Vicki Ellis is based on a real person.

There haven’t been a ton of interviews given about this show ahead of its release, but Zeta-Jones did sit down with Extra TV to speak about the role. She made no indication that there’s a real-life Vicki Ellis out there, but the actor did make it clear the she’s having a ball playing this character. “First of all, I’m just so grateful to have the opportunity to play this kind of woman,” she told the outlet. “When I go out in the world, what I really wanted to say and do, Vicki Ellis does … There’s a part of me that just relishes playing this role.”

Vicki definitely seems like a force to be reckoned with. The trailer for the show, found below, shows just how far she’s willing to go to make the girls in her charge successful. “No one likes a pretty girl who expects big things to happen to her,” she tells the camera.

Though Queen America is advertised as a “dark comedy,” Zeta-Jones said in the same interview that their intention isn’t to mock the people who take part in these kinds of pageants. Rather, she thinks the show will shine a light on the determination those participants demonstrate. “When you think of a story of the beauty pageant world, and this is not knocking that world, but you don’t feel like there’s a lot of depth to it,” she said. “And so what you see in our story is the commitment, the pain, the ambition, that all comes into grooming someone to be the best of the best.”

The show is set in Tulsa, Oklahoma, where Vicky has carefully cultivated a reputation for herself as the “who’s who” of pageant hosts. According to Variety, the bulk of the series will focus on Vicki’s journey toward helping the “hapless” Samantha Stone take the ultimate title, and it could put her entire empire at stake when Samantha doesn’t prove to be the promising candidate she was hoping for.

The jury seems to be completely out on how Queen America will be received — there are no reviews listed on critic sites like Rotten Tomatoes, and no TV critics or publications appear to have released any official comments on how effectively the show plays out. But Zeta-Jones is a bona fide Oscar winner, so it feels safe to have her in front of the screen when you’re gunning for success.

And according to Digital Spy, there’s even more talent behind the scenes — creator Meaghan Oppenheimer has roots in Fear The Walking Dead, and producer Bruna Papandrea was involved in projects like Gone Girl, Wild and Big Little Lies. Queen America is in good hands, but only time will tell if it’ll be a hit for Facebook Watch.