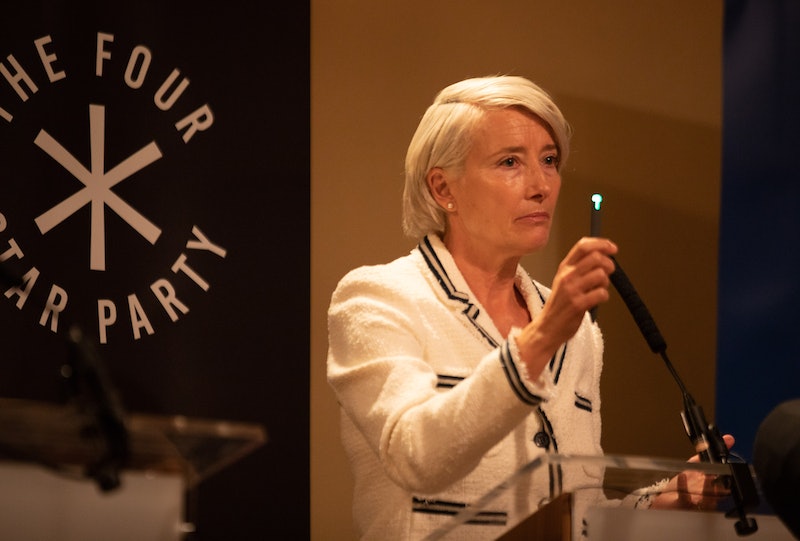 Do you ever wonder what the world will look like in years to come? It would appear Russell T Davies shared that curiosity as his new BBC drama Years and Years will explore what the next 15 years could have in store for the UK. His fictional future is both dark and exciting and Years and Years promises to be completely gripping. One of the biggest stars in the BBC drama is national treasure Emma Thompson. But is is Vivienne Rook based on a real person? Thompson plays populist politician Rook who looks a little too similar to some that you may recognise from real life 2019. Davies has suggested that this might be down to more than Thompson's acting prowess and the character may have been based on other politicians.

Thompson plays Vivienne Rook in Years and Years, the family saga that looks at Britain over the next 15 years. A business woman and entrepreneur, Rook is catapulted to power after she runs for parliament and forms her own party, the Four Star party. In an interview with Radio Times, writer Russell T Davies said, “there’s a whole generation of tricksters learning how to use social media, how to use the television, how to say whatever they like in public as long as it entertains us.” So, if Rook reminds you of Trump, Le Pen, or Farage, it may be because they were used as inspiration for the character, the Radio Times reports.

Heralded as a politician who speaks her mind, it isn’t yet clear what Rook's policies are exactly. Speaking about her character in a statement Thompson said, “what’s clever about Vivienne, in terms of Russell’s creation of this creature is that she presents as a down to earth, ordinary, working woman who just wants the best for everybody and feels passionately about ordinary people and ordinary issues. Of course she’s not that at all, she’s something a great deal more sinister and is someone who wants power.” She continued:

“It’s a brilliant creation and Russell’s writing made her so incredibly alive and believable.”

Years and Years explores what the next 15 years has in store for Britain through the eyes of the Lyons family. As well as their own family joys and dramas the series looks at how technology will further shape society and where politics could go from here. Think Black Mirror meets Coronation Street. The story follows Daniel (Russell Tovey), Stephen (Rory Kinnear) and his wife Celeste (T’Nia Miller), sisters Rosie (Ruth Madeley) and Edith (Jessica Hynes), Gran Muriel (Anne Reid) and the family’s children as each episode is a year or two ahead of the last.

At first it isn’t explicitly clear how Thompson's character will affect the others aside from them watching her on Question Time. However, it soon becomes clear that her ruthless nature and desire for power at any cost will have an impact on all of their lives.

“The series follows the Lyons family, while in the background huge shifts in politics and the very nature of Great Britain take shape. So that rising tide needs a figurehead. It needs to be personal, it needs a name and a face and a character. Enter Mrs Rook! And when you make her one of Britain’s finest actors, then the whole idea ignites. I hope people will be fascinated by Viv. She’s a maverick, she’s a danger, she’s a wildcard. And she’s also very, very clever — much cleverer than she first appears.”

Years and Years sounds like it has all the ingredients for a great family saga. An awesome cast, great story line, and legendary writer make it one that can’t be missed.