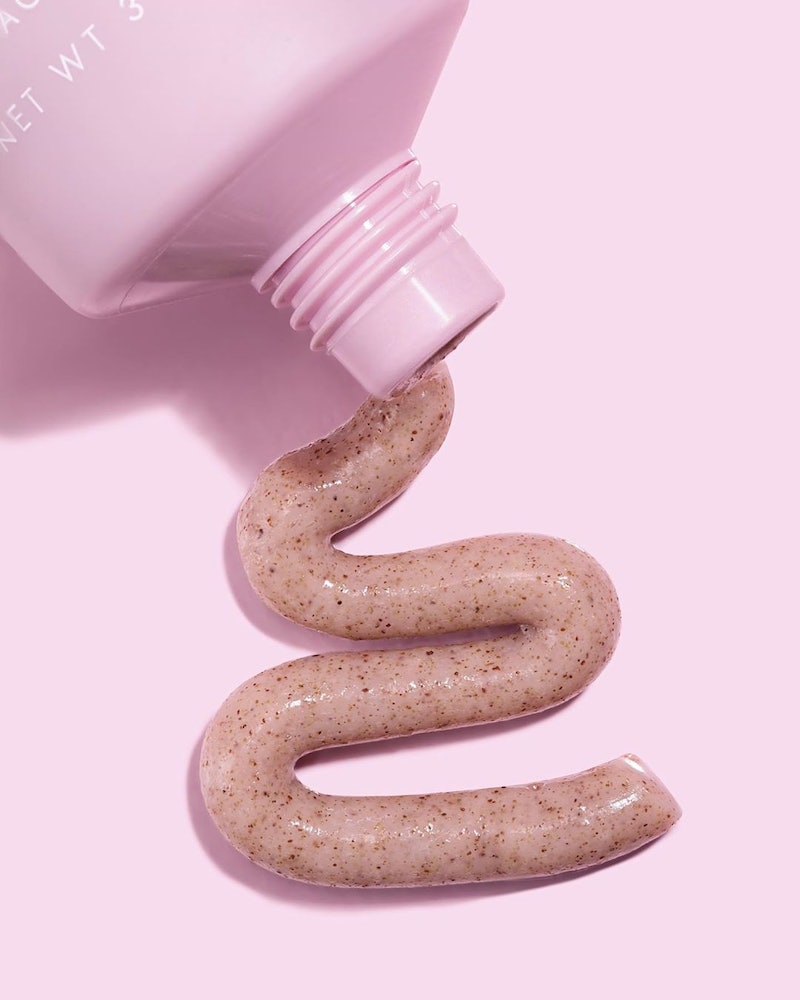 On May 10, Kylie Jenner announced Kylie Skin, her new eponymous skin care line. However, only 24 hours later, the line was already causing controversy. One of the products in the line is Kylie Skin Walnut Face Scrub, an exfoliating cleanser made with, well, walnuts — an ingredient that sparked a lawsuit in 2016 because of claims that it was damaging to skin. All of this has potential Kylie Skin customers wondering: Are walnut scrubs really bad for you?

Before you head to the Kylie Skin website to pick up the scrub, let's look at some of the facts about physical exfoliators and what may or may not actually be bad for your face. Bustle reached out to Kylie Skin for comment on the safety of the Walnut Scrub.

Though Jenner's new walnut scrub has opened up the conversation about physical exfoliators again, she and her new brand are far from the only one that offers a scrub of this kind. Well-known skin care brand Ole Henriksen also has a walnut scrub, and affordable drugstore brand e.l.f. Cosmetics has one, too. Then, there are similar physical exfoliators like St. Ives' walnut-containing apricot scrub.

With so many physical exfoliators containing walnut already on the market, they can't be that bad right? Bustle has reached out to the aforementioned brands for comment on the safety of their scrubs, and as of press time has heard back from e.l.f. who had no one available to offer commentary at the time and St. Ives who responded with the following, "We can only speak to our products that include walnut shell powder and we stand by both the efficacy and the safety of our products. St. Ives scrubs are safe to use, dermatologist tested and do not cause 'micro-tears,' and we are pleased that the U.S. District Court has recently dismissed the class action lawsuit that suggests otherwise.”

The brand went on to offer the following as well: "Dr. Shari Marchbein, MD, a board-certified Dermatologist at Downtown Dermatology in New York City who works with St. Ives said, 'Exfoliants are intended to be used in moderation and the right frequency depends on the individual. I use a gentle physical exfoliant — St. Ives Radiant Skin Face Scrub — to slough away dead skin cells and improve dull, flaky skin two to three times per week. It is one of my favorite products and makes an instant difference for my skin. For those with sensitive skin, including eczema and rosacea, a chemical exfoliant containing various AHAs and BHAs may be a better option. With exfoliants, it is truly a case of every person’s skin being different.'"

The question remains, and it may be a bit more complicated than you may think.

You can trace the walnut scrub reputation back to a lawsuit filed against St. Ives in 2016. Two women filed suit against St. Ives' parent company Unilever alleging that the walnut shells used in the scrub lead to inflammation of the skin which in turns leads to early aging. Ultimately, the lawsuit was dismissed due to the plaintiffs' inability to prove their claims. However, with Jenner's releases of the walnut scrub, Twitter users were quick to recall the lawsuit and claims that the product was bad for your skin.

According to Ryan Christopher, Global Director of Education for COSMEDIX — a brand that uses both physical and naturally-occurring chemical exfoliants in their products — nearly all manual exfoliators are guilty of this. He explains, "The truth is that all granular exfoliating ingredients help to smooth the surface of the skin by 'scraping' and possibly 'scratching' the outermost protective layer of the skin."

But that doesn't mean all forms of physical exfoliators are bad. The trick to manual exfoliation is to find a more gentle ingredient — either something super fine, naturally occurring, or created from a face-safe substance like oil.

"Not all physical scrubs are bad, just look for something less aggressive," Christopher says. He recommends products including poppy and date seeds, or beads made of hardened oil like jojoba.

Dr. Janelle Vega, co-founder of Bia Life, explains that the more round a particle is, the more gentle it will be for your skin. With products that contain walnut shells, the particles can be more abrasive, especially for sensitive skin.

Dr. Vega says via email, "Walnut scrubs can be abrasive especially if you have sensitive skin or open areas because the edges can be jagged — unlike some scrubs that are sugar based that have a more rounded edge."

She goes on to say that you should be especially careful if you're also using a chemical exfoliator like an AHA or retinol, as these can make your skin even more prone to irritation from a scrub.

As a dermatologist who has formulated his own skin products, walnuts is one of the last ingredients I would include.

According to Fashionista, however, dermatologists seems to agree that a chemical exfoliator is the way to go, not a scrub like Jenner's new one. The website cites three different independent dermatologists who all fall on the side of chemical exfoliation for the skin due to its more gentle nature. While it is still possible to over exfoliate with chemical products, scrubs, such as those with walnuts, are more likely to cause irritation and potential acne.

Turns out, there are also other considerations to be taken when looking into using a physical exfoliator, particularly one with nut or pit particles. Dermatologist Dr. Kenneth Mark says that while the scrubs may be safe for some, allergies are another concern.

"Why make up a scrub where up to 1% of the population is allergic? Especially when there are not significant benefits to walnut versus so many other known safe and more effective ingredients," Dr. Mark tells Bustle via email. "Besides being directly allergic to walnut, there are many others (25-40%) who are allergic to one of the most common allergens, pollen, for example, that develop a cross-reactive allergy to walnuts as well. As a dermatologist who has formulated his own skin products, walnuts is one of the last ingredients I would include."

Dr. Marks does go on to explain that you should just make sure that you aren't sensitive or allergic to any of the ingredients in a scrub.

Ultimately, skin care experts seem wary of Jenner's new product — especially before testing it out themselves. Factors such as how finely milled the walnut powder is, how sensitive your skin is, and what allergies you have all play into your reaction to a manual exfoliator. At the end of the day, spot testing on your skin is always a good idea — especially with an ingredient that has such an infamous reputation.