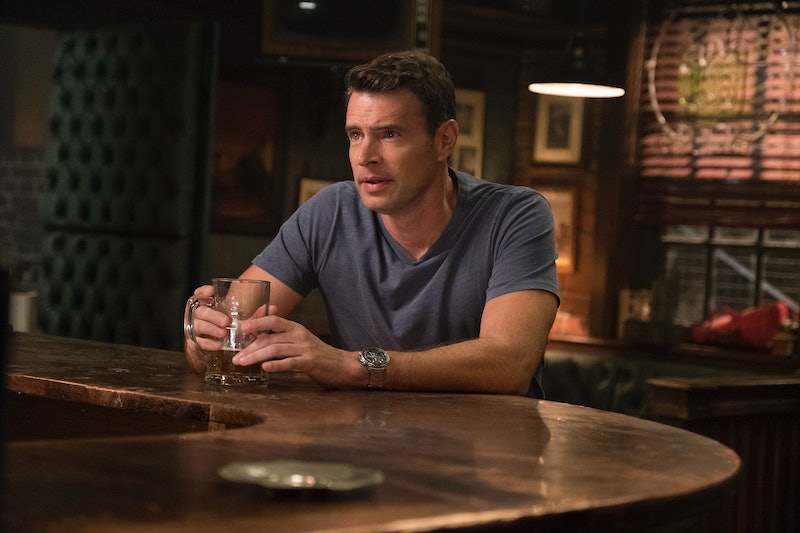 Going through a break up is always brutal, but how much worse would it be if you were an FBI agent who needed to stay focused in order to handle major matters of international security? That's the premise of ABC's new series, Whiskey Cavalier, which premieres on Feb. 24. Scott Foley stars as the titular, broken-hearted agent, while Lauren Cohan plays the tough-as-nails CIA agent assigned to work with him. Whiskey Cavalier isn't based on a true story exactly, but that doesn't mean that creator David Hemingson didn't have multiple sources of inspiration when it came to designing his new series.

Speaking to Entertainment Weekly, Hemingson revealed that he actually has a personal friend who sounds a lot like Whiskey Cavalier's main character, Will. "I have a friend who is an FBI agent, but he’s a sensitive FBI agent," said Hemingson. "He would go off and do these really exciting things and then we’d talk about his relationship with his girlfriend."

Hemingson went on to tell EW that he's actually known multiple intelligence agents, and finds that they often have a similar problem when it comes to love and romance. "They want what we all want in life, which is love and connection," he continued. "But their business, which is the business of suspicion, makes it almost impossible. It’s this interesting disconnect... That made me go, what would happen if we injected some romance and some emotional intelligence into the lives of these spies?"

While he admits to finding inspiration for the premise of Whiskey Cavalier in real life, Hemingson also added that he sees it as a mash-up of existing series and genres, too. "I sort of look at this show as Mission: Impossible smashes into Cheers, with basically Scott Foley as Diane Chambers and Lauren Cohan as Sam Malone. So that’s how I frame the show in my mind."

Foley appeared on Kelly and Ryan in May 2018 to promote the series, and explained that this hybridized style is exactly the type of project he'd been looking for. "It's the show I've always wanted to do," Foley said. "I've been so fortunate in my career to do both dramas and comedies, and I wanted to find something that combined them both. And this is it." Describing his character, Foley told Kelly and Ryan that his character was a new type of hero — especially for these genres. "I play an FBI agent who has high emotional sensitivity, so he's a sort of new hero."

The fact that Will's character isn't the norm when it comes to portraying FBI agents hasn't been lost on the intelligence community, either. Chris Voss, a former hostage negotiator for the FBI, spoke with Business Insider to bust that myth that all agents are completely devoid of sentiment or personal connections.

"Obviously most FBI agents are concerned about crime and national security, but they also, for the most part, have families," Voss explained. "They have kids, they have sick days off, they worry about their wives or their husbands, and they attend birthday parties — just regular stuff."

Clearly, the characters in Whiskey Cavalier have been embellished for both drama and comedic effect. Even so, the tricky social and emotional situations they run up against are clearly something that's common for everyone, no matter their profession.