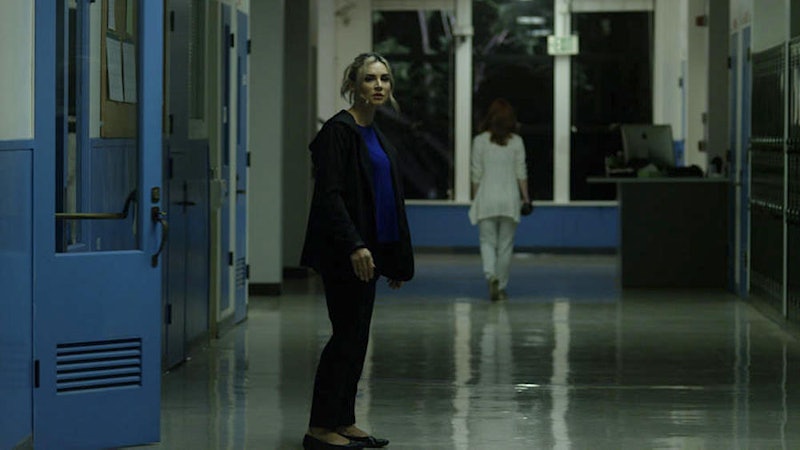 You don't have to be a parent to know that when a child goes missing, it's one of the scariest things that can happen. What if something terrible happened to them? What if you never see them again? The questions plague your mind over and over again in a never-ending, relentless cycle. It's also what makes Lifetime Movies' latest film so terrifying, because while Who Stole My Daughter? isn't based on a true story, it certainly could be. The film is, quite literally, a parent's worst nightmare.

Though Who Stole My Daughter doesn't seem to be based on any one specific incident, child abductions are unfortunately quite common. According to the FBI's National Crime Information Center (NCIC) Missing Person File, there were 85,459 active missing person records as of Dec. 31, 2018, and 34.8 percent (29,758) of those records involve juveniles under the age of 18.

That's why AMBER (America's Missing: Broadcast Emergency Response) Alerts were created: to help law enforcement find children who they believe to be kidnapped or in immediate danger. And while the system isn't always guaranteed to work, the AMBER Alert program has been credited with the safe recovery of 957 children between 1997 and April 2019, according to the AMBER Alert website.

But you don't need statistics to know how common kidnappings can be, which is why Who Stole My Daughter? may hit a little too close to home. Just take comfort in knowing that while the premise may seem scary, this particular cast of characters isn't based on real family who went through this harrowing experience. Like many Lifetime movies before it, the film was created to entertain you and escape the worries and troubles of your life — or at least, to think about someone else's for a few hours. What better than a heart-pounding Lifetime drama to distract your thoughts?

According to the official synopsis for Who Stole My Daughter, the movie picks up when a young, 12-year-old girl named Katie Sullivan disappears from her school without a trace on a crisp, fall day. This prompts her mother to organize and launch a massive nationwide manhunt for Katie, hoping beyond hope that it will lead to her successful recovery. But alas, Katie is nowhere to be found and is eventually presumed to be dead. The logline goes on to explain:

"Five years later a 17-year-old Katie turns up at Janet's doorstep. The overwhelming joy is short lived, though, as Katie is suffering from severe trauma and unable to account for her absence. What's worse, after mysterious strangers begin following them, Janet becomes convinced the kidnappers have also returned for Katie."

So what exactly happened to Katie for all of those years and who are these mystery people skulking around town? Interested viewers will just have to tune in when the movie debuts on Friday, Aug. 30 at 8 p.m. ET on Lifetime to see how it all plays out. Hopefully, after all they've endured, Katie and her mom will get a happy ending.