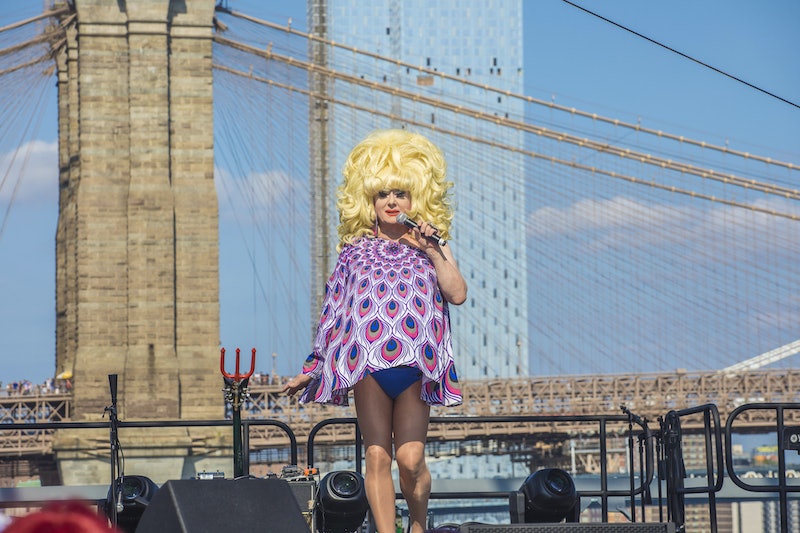 In the sweltering summer of 1984, a group of drag queens stumbled drunkenly out of the Pyramid Bar in downtown Manhattan after closing time, looking for a place to gather. They ended up in Tompkins Square Park on the Lower East Side, where they put on an impromptu drag show, mostly for people trying to sleep in the public space. One of the night's attendees, Lady Bunny, an NYC drag superstar, decided that their improvised show should actually be turned into a festival and Wigstock was born. As the HBO documentary Wig shows, Wigstock, an end-of-summer bash held on Labor Day, starring the drag community but welcome to all, thrived until 2001, when the aftermath of 9/11 and NYC's rising costs led to a long pause. But the film also recounts how Wigstock was revived in 2018. So, is Wigstock 2019 happening?

UPDATE: Lady Bunny responded via email on June 18, saying, "Not sure yet. But if people are in the mood for a drag festival, they can always attend our sister event in Brooklyn called Bushwig. It's the weekend after Labor Day."

EARLIER: You can learn all about the history of the guerilla-turned-professional event when Wig premieres on June 18 (and will also be available on HBO Now and HBO Go.) The doc, directed by Chris Moukarbel (Gaga: Five Foot Two), utilizes 30 year old footage to explore the underground, alternative drag scene of the 1980s and '90s. Budding superstars like RuPaul were a part of the early days of Wigstock, but the event was founded in a much different world than this one, where Drag Race is a mainstream TV phenomenon. "Wigstock was born during a time of crisis in the gay community. The impact of the AIDS epidemic was growing, and a backlash against gay pride was rampant. Equal parts social commentary and celebration, Wigstock proudly brought drag culture into broad daylight," the film's press notes read.

There's no denying that the popularity the competition series has played a role in establishing drag artistry as almost family entertainment, the doc admits. That influence can be felt elsewhere, with the acclaim garnered by the FX musical drama Pose, the Broadway revival of Stephen Trask and John Cameron Mitchell's Hedwig and the Angry Inch, the long run of Kinky Boots, and into pop music through acts such as Lady Gaga, whose aesthetic certainly pulls from drag influences and who has collaborated with many queens.

But as all of this was happening, Wigstock never truly went away. In the early aughts, Lady Bunny and her associates joined up with the Howl Festival on the Lower East Side, and in 2015 and 2016, a boat cruise took its place, which took ticket buyers around the island of Manhattan with some of the city's most established drag artists. But in 2018, actor Neil Patrick Harris and his husband David Burtka got in touch with Lady Bunny about reviving the festival. Harris had won a Tony Award a few years prior for portraying Hedwig in the gender-bending Broadway musical Hedwig and the Angry Inch. John Cameron Mitchell, who co-wrote the show and originated the role, attended an early Wigstock, and performed musical numbers from the show in character, as is seen in Wig.

While Wig dives back in time to those early fests, it also explores the issues that come with reviving a festival in a very changed city. What was once an underground celebration is now advertised widely and held at the South Street Seaport. Harris expresses that that his biggest worry is that Wigstock 2018 is going to end up feeling like a Disney production rather than its original incarnation. And not only is the city itself wearing a different face, but the community itself has grown and changed.

As successful as Wigstock 2018 was, and Wig certainly shows that it was a hit among its attendees, performers, and organizers, there's no indication anywhere online that Wigstock 2019 is happening. Bustle reached out to Lady Bunny, Harris, and Burtka, but had not heard back as of publication time. So it seems as though the event is on another, hopefully shorter hiatus. Though, perhaps you just have to know where to find it, if Lady Bunny and her peers are taking Wigstock back underground. In which case, you might want to just hang around Tompkins Square Park on Labor Day, hoping for a surprise show.