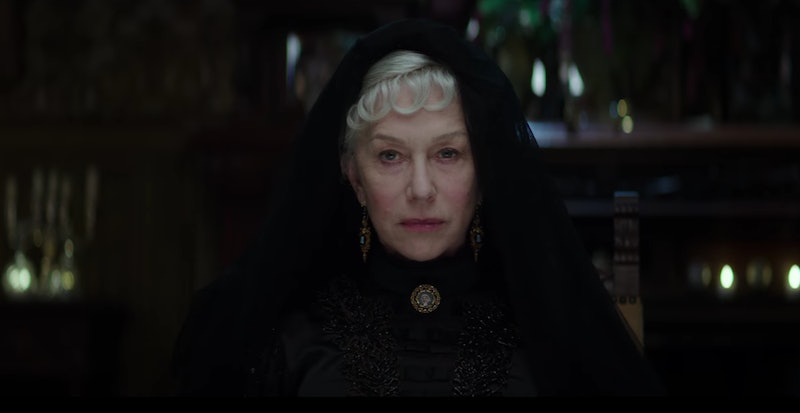 The Winchester Mystery House is one of the largest, strangest, and supposedly most haunted homes in America. For 38 years, Sarah Winchester, heiress to the vast Winchester rifle fortune, directed the home's expansion into a confusing maze of stairways to nowhere and inaccessible rooms. A film based on the bizarre home and its mistress is coming out soon, but is Winchester a true story? The most frightening thing about this horror film is how much of it actually is.

Under construction for 38 years, the Winchester Mystery House is a wild mix of architectural styles and adornments. The impressive mansion and popular tourist destination has over 150 rooms and was at one point seven stories high, Slate reports, before an earthquake knocked it down to the four remaining today. In Winchester, the perpetual construction is a desperate attempt by Mrs. Winchester to keep her family safe. Believing spirits killed by Winchester rifles will seek revenge, the maze of rooms is meant to confuse the malevolent ghosts, and provide Mrs. Winchester and her family refuge.

In real life, things were a bit different. According to the film and general legend of the house, after the double tragedy of her infant daughter and husband dying in short succession, Mrs. Winchester contacted psychic medium Alan Coons. Here's where the movie splits off, even in legend. Coons, supposedly speaking as Mrs. Winchester's husband, said to atone for the Winchester blood money, she would need to build a place to house all the spirits killed by the rifles. Not out of fear of revenge, but as a place of refuge for ghosts, with the home's ever-growing size a physical testament to American gun violence, as Smithsonian reports.

In reality, there's no proof Mrs. Winchester ever met with Cooms, and her longtime companion and nurse Henrietta Severs denied Mrs. Winchester having any spiritualist or occult leanings. She was highly private, so most of the tales about her belief in ghosts and mediums are speculation and assumptions, many circulating while Mrs. Winchester was still alive. Given that the house was bought by a carnival family to open to public tours, it's not surprising the "legend" of the house and its owner grew larger than the mansion itself.

Mrs. Winchester, shown in the photo below, did wear a veil and live a mostly isolated life; the house's only other real occupant was her secretary and niece, Marion Marriott. She was a widow who'd suffered two family deaths in quick succession, including watching an infant daughter die of genetically-caused malnutrition. She had a family history of depression, and an alternate explanation for the home's construction is that moving to the opposite coast provided a needed change of scenery, and the constant building a convenient distraction from sorrow.

Though Winchester portrays its titular lead as a woman at the mercy of spirits, the ghost stories overshadow an independent woman who lived the exact life she wanted. Admittedly, Mrs. Winchester's eccentricity was supported by her immense fortune; she made $1000 a day in royalties (about $30,000 in 2017 dollars), but she designed some of the mansion's genuinely innovative elements. Her home had electricity years before the general public deemed it "safe" for household use, a servant call-box system, and even its own gas-manufacturing plant to save energy, according to Damn Interesting.

For those skeptics who believe the mystery of the home died with Mrs. Winchester, surprises are still being revealed. In 2016, a "new" room was discovered — a storage space with paintings, a sewing machine, Victorian couch and dress forms dubbed "Sarah's Attic". It was sealed off after the 1906 earthquake that trapped Mrs. Winchester in the Daisy Bedroom, along with the entire damaged front section of the house. That's one spooky, mysterious house.