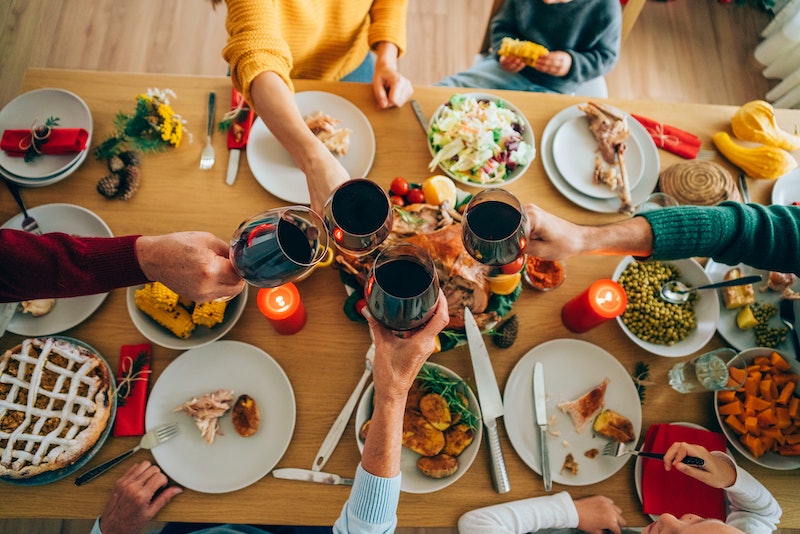 Many drinkers believe that different kinds of alcohol create different personal reactions; one of my friends is convinced that tequila, and only tequila, makes her depressed. These beliefs are sometimes very old; gin, for instance, was known as "mother's ruin" in 1700s England because it was believed to affect women more than men. However, experts tell Bustle that the idea of experiencing specific symptoms depending on what you're drinking — being "beer drunk" as distinct from "wine drunk," for instance — isn't necessarily based in fact.

"Alcohol is alcohol," Dr. Nicole Lee, a professor at the National Drug Research Institute at Curtin University, tells Bustle. "The active ingredient, whether it's beer, wine or spirits, is the same."

The ingredient in question is ethyl alcohol, or ethanol, and many of the symptoms experienced when drinking different alcohols can be attributed to their alcohol percentage and how fast you're drinking them — not really the alcohol type itself. Lee tells Bustle that alcohol strength, the amount you consume, your tolerance, the location where you're drinking, and other health factors can affect your experience, but the type doesn't really matter.

This also holds true for hangovers. "The most common symptoms of alcohol-induced hangover are headache, dizziness, nausea, stomach ache, loss of appetite, fatigue, thirst and palpitations," Dr. Jöran Köchling of the faculty of health at Witten/Herdecke University tells Bustle. "All alcoholic beverages, if consumed in significant amounts, will lead to these symptoms. It cannot be directed by only drinking specific types alcohols." Köchling led a study published in The American Journal of Clinical Nutrition in 2019 that found that the old myth "beer before wine, you'll feel fine" folk wisdom about hangovers is incorrect; no matter the order in which you drink different types of alcohols, the hangover is the same.

Science has shown that people believe strongly in the emotional properties of different kinds of alcohol, even though they're not based in fact. A study published in The British Medical Journal in 2017 found that people tend to report feeling more aggressive after drinking spirits, and that women report feeling higher levels of every emotion while drinking in general. Our expectations about being wine drunk, tequila drunk, and so on can heavily color our experiences, even if our bodies aren't making much of a distinction between different alcohol types.

"People do feel different emotions when they drink, of course, but it’s all very individual and not to do with the type of drink," Lee says.

There are some factors in the alcohols themselves, and in the body's reaction to them, that may change our experiences, experts tell Bustle. "An earlier study has shown that the less the alcohol is distilled during its processing, the more likely the occurrence of a hangover with only limited amounts. So bourbon would be more likely to lead to hangover than vodka," Köchling says.

Another element that may affect hangovers, according to Köchling, is the presence of congeners within the alcohol itself. Congeners are chemicals produced when alcohol is fermented, including methanol and tannins. They're present in greater numbers in darker drinks like whiskey or red wine. Some studies have found that hangovers are more intense for people who've drunk alcohols with a large amount of congeners, like bourbon. That doesn't necessarily mean that the experience of drinking them feels different, but the (achy, miserable) morning after may color memories of the night before.

Mixers also matter for experiences of drunkenness. "People may tolerate some drinks better than others due to the beverages used for mixing," Köchling tells Bustle. Drinking alcohols with caffeine, for instance, will produce different effects to mixing them with sugary fruit juices, or diluting them with ice. Caffeine mixers may also make you drunker than you anticipated. "When alcohol is mixed with caffeine, the caffeine can mask the depressant effects of alcohol, making drinkers feel more alert than they would otherwise. As a result, they may drink more alcohol and become more impaired than they realize, increasing the risk of alcohol-attributable harms," the Center for Disease Control and Prevention wrote in 2018.

Diet soft drink mixers can also have unintended consequences. A small study in Alcoholism: Clinical & Experimental Research in 2013 found that opting for diet mixers rather than sugar-heavy versions increased how fast people got drunk. Sugar tends to slow down absorption of alcohol, the study explains, but diet mixers without sugars don't, so the effects of alcohol might be felt much earlier.

However, most of the myths about drunkenness and types of alcohol aren't based in fact. "There’s no specific emotions that are attached to specific types of drink — so gin doesn’t consistently make people melancholy," Lee tells Bustle. Being drunk or hungover may change depending on the way in which your drink was created, how it's mixed, and how much tolerance your body has to alcohol consumption, but overall, there's not much difference. "When alcohol is metabolized, it becomes noxious and leads to acute alcohol intoxication and a hangover on the following day. This does not change with different alcoholic beverages," Köchling says. Unfortunately, a hangover is a hangover is a hangover.