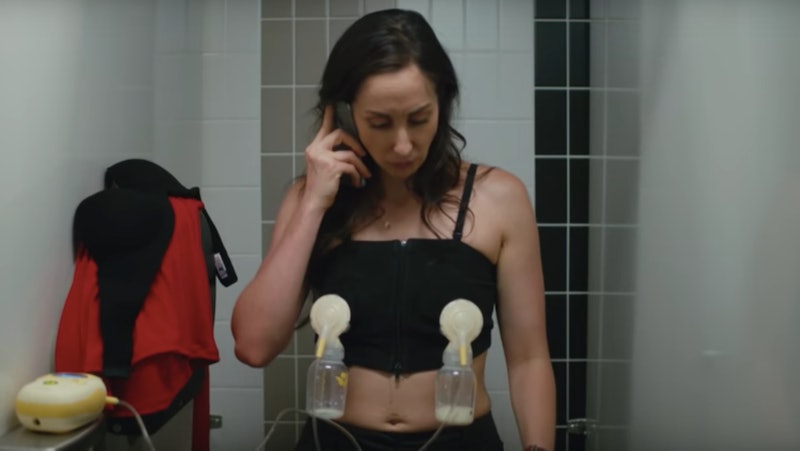 It's about time the real struggles of motherhood were represented on TV. Catherine Reitman felt that it wasn't, and as a mother of two boys herself, decided to change that with her own show, Workin' Moms. So, in a way, Workin' Moms is based on a true story. It's not necessarily non-fiction, but its inspired by her own struggles and triumphs as a new mom.

"These four women you get to know on Workin' Moms are all based on highly flawed aspects of myself," Reitman told CBC News. "You know, aspects that maybe a few years ago, a younger version of myself wouldn't want to admit. But now that we watch it and we read the scripts, we feel the truth within it, and I hope the audience can too. We like shows that are honest, that feel real, that aren't afraid to hide things."

That statement rings particularly true during a scene in which Reitman, who plays a mom named Kate Foster in the show, pumps breastmilk in a public bathroom stall while taking a phone call. The other three moms, Anne, Frankie, and Jenny are played by Dani Kind, Juno Rinaldi, and Jessalyn Wanlim, respectively.

Workin' Moms brings to light things that moms have long been ashamed of — and shamed for — in an effort to normalize them and make them easier to talk about. And they should be easy to talk about, considering they're things that most moms experience.

"It would feel dishonest to me to make a show about new mothers without seeing what happens to the body," Reitman told CBC. But if you think the show is directed to an audience of only moms, you thought wrong. Reitman, who writes, produces, and directs the series, made sure everyone could find something about it relatable.

"We cover a pretty large amount of topics," she continued. "But the show really doesn't just cover what it is to be a new mother. The show covers what it is to be human." Reitman's husband, Phil Sternberg, who co-produces the show with her, believes fathers should find the show relatable, too. "I never just wanted to portray moms," Reitman said. "I wanted to portray people that are going through really challenging experiences, that are being judged constantly, that are being torn in all sorts of directions."

Reitman also told CBC News that, although the show is meant to be funny, it's also supposed to get real about motherhood and the constant judgement that comes with it. Think of all the motherhood-related posts you see on social media — they're constantly being compared to one another. Reitman drew on those observations and experiences to write Workin' Moms.

"We walk around not only feeling incredibly judged, but judging as well," she said. "I think we have to own up to the fact that we're part of the problem. But specifically the community of mothers is a realm that is more judgement-heavy than others."

The series debuted on Canada's CBC Network in 2017, and Season 3 is currently airing. On Jan. 23, Reitman announced on Twitter that the series would release globally with Netflix on Feb. 22. and move on with the streaming service as a Netflix original, so if you like Workin' Moms Season 1, you'll get to see plenty more of Reitman's real AF mom struggles.

More like this
What’s New On Netflix: 'Never Have I Ever' & 'Indian Matchmaking' Return
By Arya Roshanian
What’s New On Netflix: 'Bridget Jones’s Diary' & 'Monster-in-Law'
By Arya Roshanian
Here’s Everything Coming To & Leaving Netflix In August
By Jake Viswanath
Watch The Trailer For Netflix’s Edgy New Comedy 'FAKES'
By Brad Witter
Get Even More From Bustle — Sign Up For The Newsletter