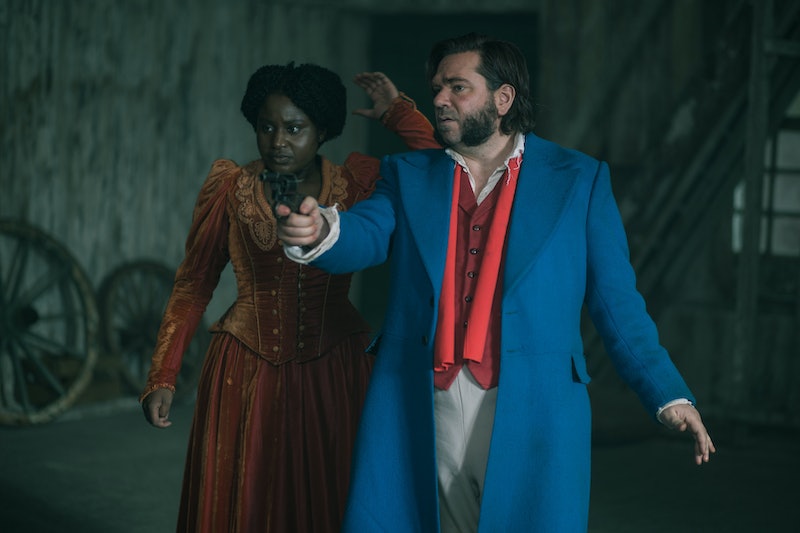 As much as I am a sucker for drama, there's only so much I can take before my brain just can't handle it all. Finding the perfect balance between heavy and light-hearted content is the key to enjoy the golden age of telly, and it looks like this Channel 4's new seriesYear of the Rabbit is the perfect serving of comedy respite to ease the tension I'm still experiencing from Killing Eve. But is Year of the Rabbit based on true stories, and how exactly did it come about?

Starring Matt Berry, Freddie Fox, Susan Wokoma, and Keeley Hawes, Year of the Rabbit is your run-of-the-mill detective show with a twist. Described by Berry (who plays Detective Inspector Rabbit), the show was conceived as a prequel to the 1970s police drama The Sweeney. "What happened was, myself and Ben Farrell at Objective were both obsessed with The Sweeney and both thought about doing some kind of prequel to that show," he told Channel 4. "I know that show backwards, as does he, we've watched it so many times. I love it. I love the warmth between the character in that which was the inspiration for this."

With The Sweeney as inspiration, Year of the Rabbit takes the concept of two cops solving crimes but instead places them in the Victorian era. As teased in the show's description, Inspector Rabbit and his new partner Strauss (played by Fox) team up with the chief of police's daughter (played by Wokoma) to "fight crime while rubbing shoulders with street gangs, crooked politicians and Bulgarian princes." Replicating the historic streets of Victorian London is quite a feat, especially when it comes to researching the crimes of the time and how they were investigated. I reached out to a representative for the show to see whether any of the crimes featured are based on actual events, and have yet to hear back. I'll let you know if I do.

There were other unlikely sources of inspiration for Year of the Rabbit, including an iconic Clint Eastwood flick. "One of the episodes was based on Dirty Harry, the Jill Halfpenny assassin. Someone shooting from the roof," Berry explained. "I was watching Dirty Harry and was inspired by that: what if we did that in Victorian times?" The actor also brought his experiences as a host at the London Dungeon into the show, where knowing your history was absolutely paramount. "I don't know what it's like now but it certainly was back in the early 2000s, when I was there, you had to know about Jack the Ripper because people would ask. It just stayed with me. Then my interest in Victorian London widened. You use bits and pieces."

As far as how the comedy merges in, it looks like it was pretty seamless to integrate current humour in a past era. "You get that double joy of it satirising issues of today but through the lens of Victorian London," Fox told Channel 4. "You get the idea of women's empowerment and equality of representation and all that stuff. Obviously that's a central sociological issue this moment of our history, so being able to play with the satire of what it was like for women back in Victorian London was great fun."

Year of the Rabbit starts tonight at 10 p.m. on Channel 4.