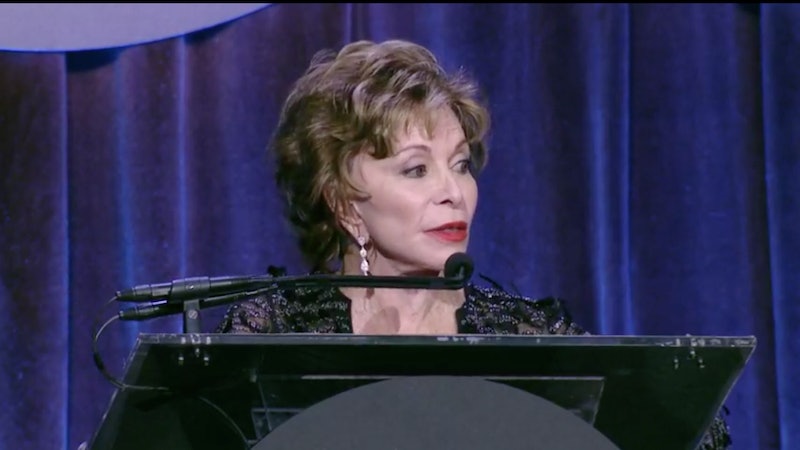 Last night, iconic Chilean author Isabel Allende took the stage at the 2018 National Book Awards to accept The Distinguished Contribution to American Letters award — and she asked for an encyclopedia to stand on, told her own origin story as an immigrant to the United States, and touched on the difficulty of being bilingual and making love: "It would feel ridiculous panting in English." And that was all in the first, minute. These seven quotes from Isabel Allende's National Book Awards speech prove she's a literary legend, with the ability to inspire tears and laughter and conscious-altering retrospection, all within a handful of sentences.

Since 1950, the National Book Awards have honored the best writing "in America." The current categories are Fiction, Nonfiction, Poetry, Translated Literature, and Young People’s Literature, though in the past Biographies and "bookseller discoveries" have also been honored. In 1989, the National Book Foundation took over distribution of the awards, with the mission of diversifying the audience for American literature and enhancing its cultural capital.

Every year, two lifetime achievement awards are presented to authors whose careers have inspired countless readers. This year, one of those went to Isabel Allende, queen of magical realism, and the first Spanish-language writer to receive such an award from the National Book Foundation. Allende's speech wove together her thoughts on memory, immigration, identity and belonging. She remembered Alan Kurdî‎, the three-year-old Kurdish boy who drowned in 2015 and whose body, washed up on the beach, became a fleeting symbol of the war in Syria and the international refugee crisis. She remembered, while much of the world forgot. It's stories like Alan's, not just his death, but his memory, said Allende, that keep her writing urgently and honestly and passionately.

Allende's career has brought forth 23 books, and her work has been translated into more than 40 languages. Her conception of success, though, can perhaps best be summed up by her own official biography: "In reality, the most important things about my life happened in the secret chambers of my heart and have no place in a biography. My most significant achievements are not my books, but the love I share with a few people—especially my family—and the ways in which I have tried to help others." You can watch the full speech on the National Book Foundation's Facebook page.