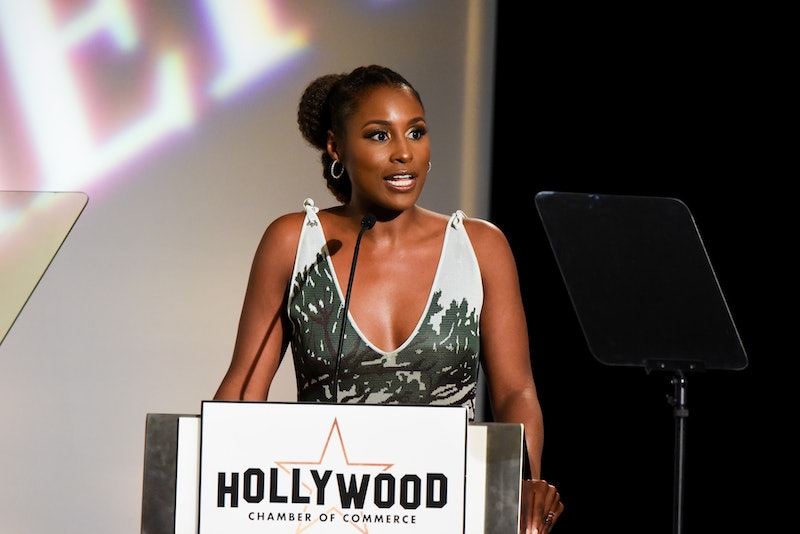 There's excellent news on the horizon for film buffs everywhere: Issa Rae and Kumail Nanjiani's The Lovebirds is a romantic comedy that is slated for production in the coming months. The news came first from The Hollywood Reporter, and it's safe to say that HBO junkies are surely celebrating. Rae and Nanjiani are a match made in modern-comedy heaven.

Neither Nanjiani nor Rae have made any public statements about the film, but The Hollywood Reporter confirmed that Michael Showalter, who directed The Big Sick, will be reuniting with Nanjiani again to direct this next film.

Though much is still unknown about the film, the general plot of it has been revealed. Per Vulture, The Lovebirds is about a couple who is on the rocks romantically, right around the time they become inextricably involved in a murder mystery. The publication further reports that people might start getting more answers about the film sooner, rather than later: production is slated to begin at the end of this month.

Rae and Nanjiani seem to be perfectly suited for this avante-garde romantic comedy, given how both of their trajectories have shot them into the stratosphere of the acting world in recent years. Nanjiani is known for his work onThe Big Sick, both as an actor and a screenwriter for the film, as well as his five-year stint on the HBO show Silicon Valley.

Meanwhile, Rae has entered the mainstream largely due to her own HBO show, Insecure. In September, Rae, who ran a popular YouTube channel titled The Misadventures of Awkward Black Girl before she made it big on HBO, said of her career path in an interview with Glamour, “There was no blueprint to do this. There was no one I could look to to be like, ‘Oh, so-and-so made some videos and then had a television show, and then did movies.'"

She added, “I’m doing what I love, and that is never lost on me. Even when I’m in my most frustrated moments, I’m like, ‘There’s always a silver lining.’ My general vibe is grateful, happy."

As for Nanjiani, he talked about his belief in the importance of being close with costars during an interview in March, AXS reported. He said of the Silicon Valley cast, "We’re all really close and we’re all really good friends."

He continued, "I think you can read that on screen. Even if the characters have a fight or disagreement or something, you can feel that we’re all very close behind the scenes. I love working with everyone, they’re so talented. It’s just a joy and an honor.”

Nanjiani also pointed out that good comedy requires a level of trust between costars. He said, “The fact that we all really trust and support each other allows the comedy and the performances to really shine in a way that they wouldn’t be able to otherwise.”

Nanjiana and Rae have never worked together on a film or television show, leading up to The Lovebirds, but it feels like a foregone conclusion that they're going to knock this one out of the park.