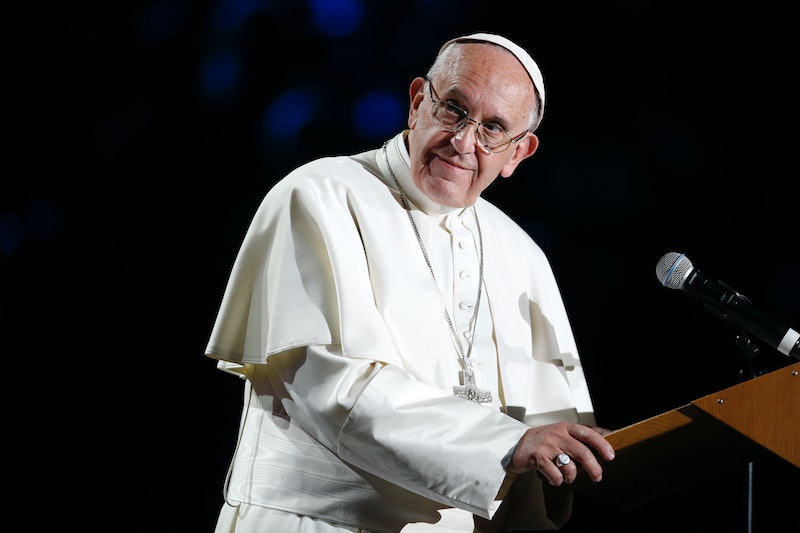 Donald Trump has no shortage of critics, but there’s one apparent detractor who is harder to brush off than the rest. You might know him as “His Holiness" or "El Papa." And now, Pope Francis appears to have made another Trump jab.

Pope Francis has been using his various platforms to obliquely criticize Trump throughout the 2016 campaign, though the Pontiff has avoided calling out Trump directly. His latest sortie has taken place on Twitter, where in the last few weeks, Francis has sent out tweets focusing on brotherhood, foreigners, and openness, which many have interpreted as slights against Trump’s anti-immigrant agenda.

“Jesus entrusted to Peter the keys to open the entrance to the kingdom of heaven, and not to close it,” the Pope tweeted on Wednesday, which many took to be a read on Trump’s proposal to build a wall along the border with Mexico. Trump supporters responded to the Pope on Twitter, including one with a meme showing mostly closed pearly gates and reading: "Remember, Heaven has a gate, a wall, and extreme vetting."

The week before, the Pope’s tweets seemed to have an even sharper focus on Trump’s immigration policies: “How often in the Bible the Lord asks us to welcome migrants and foreigners, reminding us that we too are foreigners!”

These are actually not even the most pointed statements that Francis has made against Trump.

In February of 2016, the Pope sparked outrage amongst Trump supporters when he said, in response to Trump’s proposal to halt all illegal immigration, “A person who thinks only about building walls... and not building bridges, is not Christian. This is not the gospel.”

Trump responded to the quote angrily in a statement, saying, “No leader, especially a religious leader, should have the right to question another man's religion or faith.”

But the statement went on to say:

If and when the Vatican is attacked by ISIS, which as everyone knows is ISIS's ultimate trophy, I can promise you that the Pope would have only wished and prayed that Donald Trump would have been president.

I don’t know about you but to me, them's fightin’ words.

The Pope has hit back in other ways as well. On the same day as Trump’s inauguration, the Pontiff gave an interview to Spanish newspaper El País in which he warned against the rise of populists leaders like Adolf Hitler. “Hitler didn’t steal the power, his people voted for him, and then he destroyed his people,” Francis said, though he fell short of linking this directly to Trump.

Regardless of whether the feud between the Pontiff and the President continues to escalate or stays at its current simmer, there’s something reassuring about having Pope Francis on the world stage to push back — however gently — against Trump.