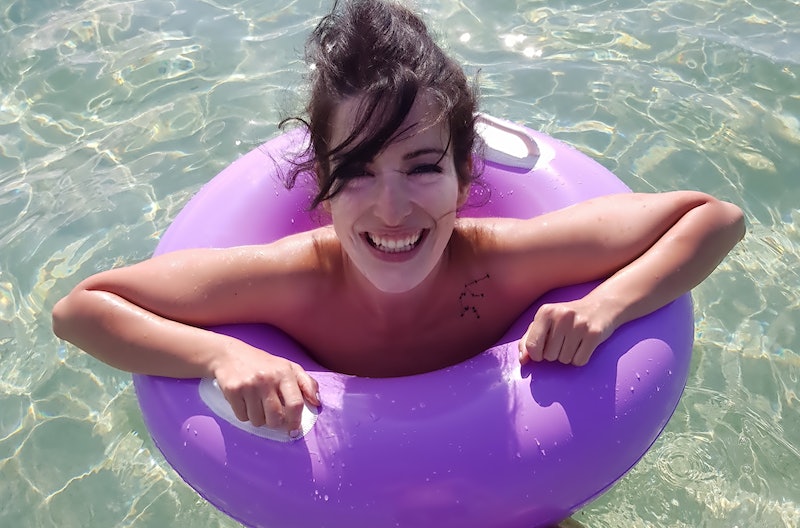 I met my first boyfriend when I was 18 years old. It was hard to show him my bare face at first, but when I did, he was fine with it. Six months into the relationship, he changed his tune during a fight, and told me that no one would ever find me beautiful because of the way that I looked. It was shocking, but what was even more shocking was what came next: I didn't leave him. I stayed with a person who told me I was ugly — and now, I realize it was because deep down, I believed him.

After that relationship, I tried my best to hide my face at all times from romantic partners — and a lot of them have never seen me without any makeup. This was extremely tedious — I would always wake up early to paint my face before they get out of bed. I also went to sleep with a full face of makeup and would avoid showering with them. All because I couldn't bear to show them something about myself that I'd been hiding for years.

When I was seven, white spots started to appear on my face and body for no reason. Eventually, I was diagnosed with vitiligo, an autoimmune disease that affects your skin by destroying melanin cells. It sounds scary, but it’s harmless — for your physical health at least. In terms of self-confidence, that's a different story.

My mother tried to help me. I spent my childhood covered in various ointments and going from one doctor to another, and she pulled strings to get me the best medication. None of it worked. Then, we tried alternative treatments, such as magnet therapy, which practitioners believe harnesses the power of magnet energy to heal the skin. Still, it didn’t work. When I was 11, my mother brought me to another alternative doctor, this time against my will. After the doctor tested me, they gave my mother a list of foods I could not eat if I wanted to get better. Suddenly, wheat, sugar, milk, chicken and other foods were forbidden from my diet. This lasted for years. Surprise: It didn’t work.

After being bullied in elementary school because of my appearance, I found something that did work: Makeup. It took years of practice and trying out different products, but by the age of 15 I could cover all my spots perfectly without looking like a birthday cake. From high school, all the way through college, not a single day passed where I went to class without a face full of makeup. My self-esteem got so low at one point that I couldn’t leave the house if I wasn’t wearing foundation and concealer. I spent years hiding my condition from one night stands, flings, and boyfriends. To this day, some of my closest friends don't know I have it.

Still, over the years, something shifted in my mind. I studied feminism in university, and books like The Beauty Myth by Naomi Wolf empowered me and made it easier to embrace my flaws. I started looking at my vitiligo as a part of me, rather than something I had to hide or get rid of.

Eventually, I had a serious relationship that lasted three years — two of which we were living together. It all went gradually; at first I was always wearing makeup, then I let him see me without any for short periods of time. Soon enough, I became comfortable to truly be myself with him. He was kind and accepting. He never used my weaknesses against me the way last guy did. In a certain way, this relationship healed me.

Despite my mother’s best intentions, her persistence to cure this illness left deeply rooted mental scars. Instead of accepting me the way I was, she spent most of my childhood trying to make me into her version of normal. It took years to heal from this, especially after the bullying in school and emotional abuse from my first boyfriend.

Now fast forward to my current relationship. I was a nervous to show my bare face to my boyfriend in the beginning. Mental scars are still here, and even though I feel comfortable without makeup in his presence now, it's hard for me to talk about it. Still, I feel a sense of relief: I don’t have to worry about my appearance as I did before. I don't have to fear that he'll hurt me or abuse me or tell me to change, the way I had been before. I've been abused before. I'm not brave enough yet to totally embrace and speak proudly about my vitiligo — but I can show my face to someone close to me, which is something I thought I'd never be able to do.