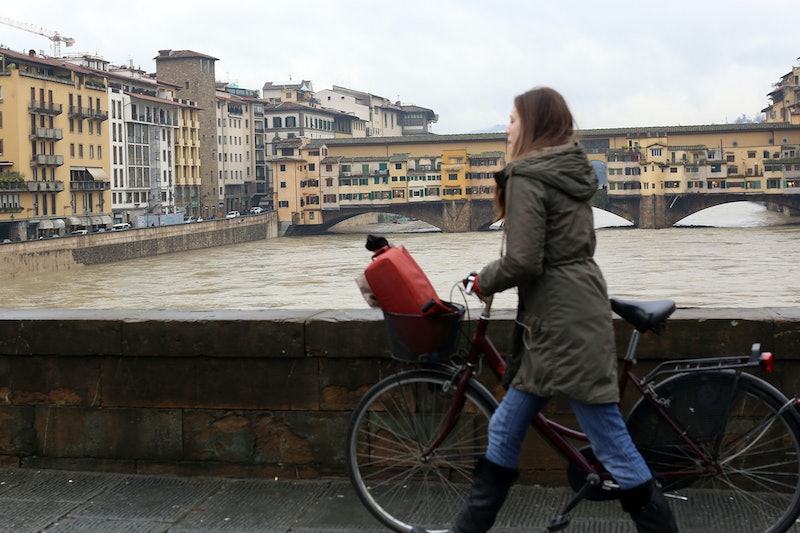 Anyone planning to visit Florence, Italy is probably looking forward to the food. Potential tourists might even specifically picture eating that food outside. (A nice stroll with a gelato, perhaps?) But if visitors eat in the city, they might be breaking the law, because Florence has enacted a street eating ban. Don't worry too much, though, it's only for certain streets at certain times of day.

The eating ban went into effect on Sept. 4, as reported by CNN. The goal of the ban is to reduce congestion and litter in the streets from tourists, because they choose to eat outside in busy areas. The ban is in place on four popular streets — Piazzale degli Uffizi, Piazza del Grano, Via de' Neri, and Via della Ninna — and only during certain hours — 12 p.m. to 3 p.m. and 6 p.m. to 10 p.m. Or, you know, the times when people would be most likely to eat there. Fines range from 150 to 500 euros ($173 to $580).

The Guardian reports, in an article titled "Sensible idea or snobbery: is Florence right to ban eating in the streets?", that a major source of the congestion is a panini shop called All'Antico Vinaio, which is so popular that tourists eat its sandwiches in front of other businesses. Perhaps the ban will draw people to the other businesses, but only if customers want to eat inside or walk further away with their purchases. There's also the overlapping matter of the type of businesses that exist in touristy areas overall. According to what one activist told NPR last year, it can be hard for residents to do things like grocery shop since so many businesses cater to tourists and students.

CNN and The Guardian both point out that it's unclear how the new restriction will be enforced or how the large range of fines will be utilized.

As noted by CNN, Florence mayor Dario Nardella posted about the ban on Facebook, and many residents spoke out in opposition to it, instead blaming the lack of real seating provided in the area, as well as too few trashcans. One commenter wrote, "Put benches then not fines. The problem is dirt not sitting on a sidewalk." Nardella responded that there is a plan to add more benches including "5 new benches in Piazza San Florence." Another Facebook user wrote, "And the benches would also serve for us inhabitants: my mom is old but she can't take a walk in her beloved city anymore because there are no benches to rest occasionally." Several of those who commented also expressed concerns over "squatters" in the area.

According to Travel + Leisure, the ban will stay in place until Jan. 6, 2019 at which point its effectiveness will be reviewed. The publication also notes that this ban comes a year after Mayor Nardella tried another tactic to prevent tourist congestion: hosing off church steps. Since tourists tend to hang out in front of churches in the city, he thought making the steps wet would discourage them from sitting down and staying a while. It seems this was not a success. As NPR reports, the sun dried the steps very quickly. Also, at the time Nardella said that he was trying this instead of fining people and, well, we can all see how that turned out now.