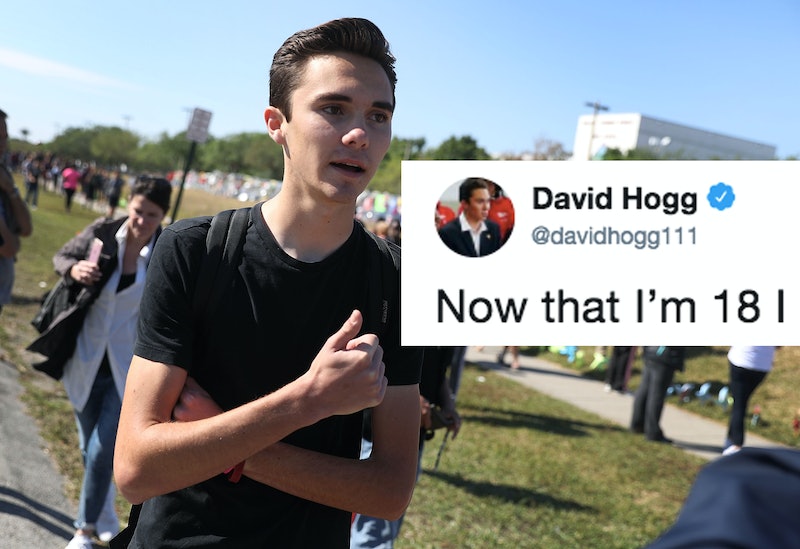 Parkland shooting survivor and #NeverAgain movement co-founder David Hogg quickly moved into national prominence as a gun violence prevention advocate after tragedy struck at his high school. The teenage activist hasn't just stuck to the gun debate, though — he's been pushing for people to just get more engaged in their communities, too. Now, David Hogg is celebrating his 18th birthday on Twitter in a powerful way.

"Now that I’m 18 I can vote will you?" Hogg tweeted on Wednesday. While he received a bunch of birthday greetings and messages of support and agreement, mixed in with those were numerous messages belittling him. Hogg has been a sort of lightning rod among the Parkland students, but he's always responded to that with eloquence, and he didn't change that pattern on his birthday.

"I’ll be canceling out your vote! Happy Birthday!" one Twitter user wrote in response to Hogg's tweet.

"That's totally ok reguardless [sic] of your beliefs I think we should all get out and make our voices heard by voting! So thank you for being politically active," Hogg tweeted back. This drew a predictable comment about his inability to spell "regardless," but Hogg, for his part, acknowledges that he is a "terrible speller" in his Twitter bio.

Hogg, despite the vitriol that he's constantly battling, has always attempted to remain bipartisan. "Can we please not debate this as Democrats and Republicans but discuss this as Americans?" his pinned tweet reads. "In the comments if you see someone you dissagree [sic] with do not attack each other talk to one another, this applies to me too. WE MUST WORK TOGETHER TO SAVE OUR FUTURE."

It makes sense, then, that he would have responded to the comment about canceling his vote by thanking the person who wrote it. After all, fighting for civic engagement means encouraging people of all political views to exercise their rights and fulfill their democratic responsibilities.

As befits an 18th birthday celebration, though, Hogg wasn't all professionalism — he also took a moment to post a picture of himself with sunglasses on upside down. "First look at me as an adult," he wrote, adding an upside-down smiley face.

Even this picture drew criticism, with one Twitter user posting it in a response to Hogg's tweet about voting with the caption, "Yes. This is exactly who we should allow to vote."

Hogg has as many defenders as he has detractors, though, so another Twitter user was ready with a response saying, "Ah yes, no one is allowed to take humorous or silly pictures or they forfeit all rights of citizenship, I forgot that was a new law."

Fortunately for Hogg, anyone has the right to vote at 18, whether they've posted humorous photos on social media or not. Not all of them have exercised that right in recent years, though, with the turnout rate for 18-29 year-olds in recent presidential elections topping out at 52 percent in 2008. Turnout overall was extremely high that year, though, and midterms like this year's generally draw much lower numbers — like, for example, 36.4 percent of eligible voters in 2014. In 2016, 50 percent of eligible young people came out to vote.

Perhaps Hogg's and his classmates' advocacy will bump that number up, however. They're all young people themselves, and they've already managed to spur people to take part in marches and school walkouts. While not all of the high school-aged participants will be eligible to vote in November, they could still boost that turnout number if their civic engagement so far translates into turning up at the polls. And if that happened, that would be as much of a success for Hogg and his colleagues as increased gun control would be.