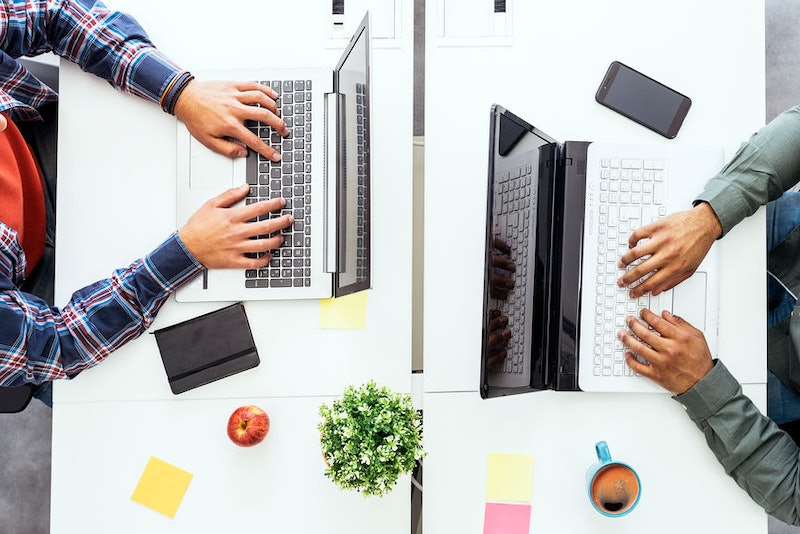 In recent years, the media has made big progress in terms of ensuring men and women have complete equality — but they still have a long way to go. The latest positive step has come in the form of ITV banning all-male comedy writing teams. Yes, that's right, ITV will no longer commission shows that currently have writing team that exclusively male. Hurrah!

On Monday 17 June, ITV's Head of Comedy Saskia Schuster took part in a panel at Channel 4's Diverse Festival in Bradford, the BBC reports. It was during this panel that Schuster spoke about her plans to diversify ITV's writing rooms, having come to the realisation that most of the shows on the channel featured all male writers' teams, or teams that were heavily imbalanced with a male majority. According to Schuster, there has been "a significant lack of shows written by women or with women on the writing teams." In fact, Schuster revealed that, for every one script she received from a woman, she would receive five from men.

As well as this, Schuster pointed out another issue within writing rooms, saying they are often "not sensitively run," and stating "[i]t can be aggressive and slightly bullying."

Speaking about the reasons that female writers struggle to get recognition with the industry, Schuster highlighted three barriers. Firstly, she believes it's difficult for women to compete for jobs with men who already have more writing credits than them. Secondly, it's tricky for female writers to find producers who "get" their voice and can work on their scripts in a way that suits both parties. Lastly, Schuster points out it's very difficult to thrive as the only female voice in the room.

While this all sounds rather alarming, Schuster has already put measurements in place to tackle the gender disparity in ITV's writing teams. "The first thing I did was I changed my terms of commissioning," she said during the panel. "I won't commission anything with an all-male writing team." Preach!

Schuster is so committed to her plight that she has launched a scheme called Comedy 50:50, which is dedicated to ensuring equality among comedy writers. So far, the scheme has created a database of 460 female writers for producers to draw upon as a resource.

"Comedy 50:50 is an initiative to address gender imbalance in comedy. Our aim is to change a culture. This is not about hitting quotas or targets as some form of box ticking exercise, it is about implementing practical measures as a way to achieve equal representation."

Comedy 50:50's website has an "opportunities" page where female writers can find work, and it also hosts events such as writing forums and workshops.

However, as well as inequality in the writing room, there are other problems to tackle within the comedy world, including a very real gender pay gap. In 2014, Huffpost reported that the top ten highest paid comedians of the previous year were ALL men. Shockingly, in 2018, Forbes revealed the same thing was still happening.

Let's hope Schuster's scheme will help in more ways than one.