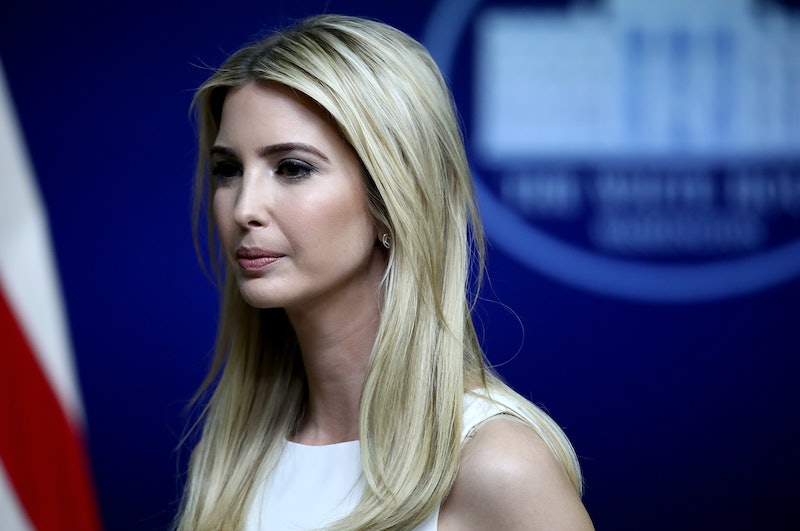 I don't envy any child of any president. How is any kid supposed to live up to their parent's example after dad (someday, please, mom) served as POTUS? Still, let's agree that Ivanka Trump is not only an adult (she's 35), but also a wildly successful business executive (she is). And after attending Georgetown and graduating from the Wharton School of Finance, it's really not so hard to imagine she knows the meaning of "complicit." But Ivanka Trump's interview on CBS This Morning implied, perhaps, that she doesn't.

"Complicit" is defined by Merriam-Webster's as: "helping to commit a crime or do wrong in some way." There, that was easy. (Merriam-Webster already did its own due diligence on this front.) When Gayle King asked Trump if she was "complicit" by not publicly denouncing the policies and actions taken on the part of POTUS that she disagrees with, Trump responded with a long answer that included saying, "I don't know what it means to be complicit." She added, "If being complicit is wanting to be a force for good and to make a positive impact, then I'm complicit." That, as we know, is not what complicit means.

But it is Americans too who need keep in mind the meaning of "complicit." It's been a decidedly anti-dynastic 200+ years of our nation's history (for the most part), and the integrity of our political system is more likely to remain intact if it stays that way.

Right now, President Trump has tapped two of his family members — daughter Ivanka and her husband, his son-in-law Jared Kushner — to set up shop in the West Wing. They have both officially divested from their own enterprises, but as recent ethics filings reveal, both of them "will remain beneficiaries" of their previous investments. As Larry Noble, a former Federal Elections Commission general counsel and chief ethics officer put it, "While removing himself [Kushner] from the management of the businesses is an important step, he is still financially benefiting from how the businesses do. This presents potential for a conflict of interest."

The POTUS himself is on record saying he could make money off a presidential campaign (all those GOP events and conferences at Mar-a-Lago being to make sense...). But there's much more financial gain to be had when the awesome powers of the executive branch are at one's behest. It is less likely — and indeed, has yet to happen with the Trumps — that a president's family members will publicly excoriate him/her if they are also wrapped up in the family activities, be they business or government related.

While other countries have history with blatant nepotism in politics, America does not. Yes, there have been presidents who were later followed into office by their progeny (the Adams and Bush families); there have been presidents who appointed family members to governmental posts (the Kennedys; to a certain extent, the Clintons). But what is going on with the Trump family is fundamentally different.

As Libby Nelson points out at Vox, "There is nothing on her résumé that suggests Ivanka Trump is qualified, by any traditional definition of the term, to advise the president of the United States." This is in contrast to Bobby Kennedy, who worked as a lawyer on the Senate counsel before being appointed Attorney General by his brother. President George W. Bush served as the governor of Texas before becoming the second surnamed Bush POTUS. Hillary Clinton had extensive legal background to recommend her to help craft policy for her husband's administration.

What Ivanka Trump has offered thus far is loyalty to her father. That's a wonderful quality in a daughter, but not so much in an ethically bound government official. Any honest observer can at least concede that human nature makes it far less probable that a family member will come clean if corruption is going on, as opposed to a non-related regular hire.

If Ivanka Trump took a hardline stance publicly against some of her father's policies, it would be much easier to trust that she's working with the good of America foremost in her mind. Whatever is said behind closed doors may assuage Trump's conscience, but it does nothing to assure regular Americans that she really is her own woman, with her own voice, one she's willing to use in the name of fairness, equality, and progress.

Supporting her father is one thing. Refusing to critique him on genuinely bad policy or process is another. And in that, it seems impossible to escape a "complicit" verdict. For Americans to ignore this puts long-established democratic norms at risk. And it is precisely those pesky democratic norms that safeguard the integrity of our government itself.