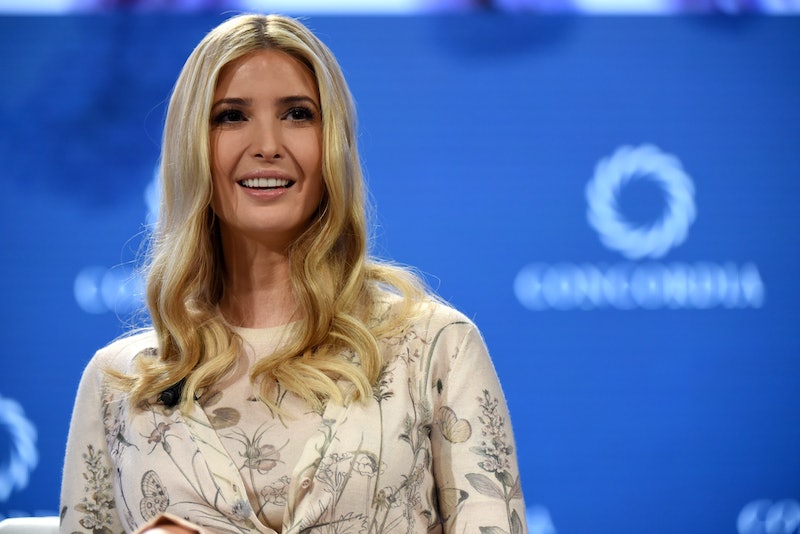 On Thursday, the Trump administration will officially launch a massive new project meant to increase economic security for women in developing countries. Called the Women's Global Development and Prosperity Initiative, it will be organized in partnership with the U.S. Agency for International Development (USAID) and led by the first daughter. Ivanka Trump's women's initiative aims to help economically empower 50 million people worldwide by 2025.

"'America First' does not mean 'America Alone,'" Trump told The New York Times on Wednesday. "We are proud to be the most generous nation in the world."

Trump promoted her new project in an op-ed published in The Wall Street Journal on Wednesday, calling it an "innovative" plan for working toward "a future in which women in every society can achieve their full potential." She outlined the initiative's three pillars: First, to provide job training and education for women; second, to invest in female entrepreneurs; and third, to remove barriers to women's participation in the economy.

Many businesses — including UPS, Walmart, and Pepsi — are expected to partner with USAID to offer new female-centric programs as part of the project, according to the Associated Press. In her Wednesday op-ed, Trump noted that the White House has directed USAID to create a $50 million fund for the initiative. The money had been previously allocated and will not be taken from preexisting programs.

The first daughter consulted with over 200 people and organizations during the initiative's development, including private companies, politicians, and nongovernmental organizations, according to her op-ed. The AP reports that she sought feedback from Henry Kissinger, who served as secretary of state under President Richard Nixon and President Gerald Ford.

Trump said Wednesday that her project is "generous" but also "fiscally responsible," per the AP. She also explained that it will include "rigorous" accountability measures to ensure progress. "This fund will implement the administration's new strategy of foreign assistance, which emphasizes investments that produce measurable results and help recipient countries become self-reliant," she wrote in The Wall Street Journal.

Trump hopes that the Women's Global Development and Prosperity Initiative, which she has abbreviated "W-GDP," will continue after her father leaves office. "This is not an initiative that we think should stop at the culmination of the administration," she Wednesday, per the AP. "We think it's something that should sustain itself over time, and we're going to work really hard to show that this is a great use of foreign development assistance."

The White House will officially launch the project on Thursday afternoon with a signing ceremony and roundtable discussion. The first daughter will also travel to Germany next week to promote W-GDP at the Munich Security Conference.

Condoleezza Rice, secretary of state under President George W. Bush, praised the first daughter's project in a Facebook post on Wednesday. "The mission of supporting women's economic development around the world is a noble one, but more importantly, a necessary one," Rice wrote. "The answers to a lot of our social ills and security challenges can be found with the empowerment of women. ... I applaud Ivanka Trump for leading this effort, and I hope leaders join together in supporting W-GDP."