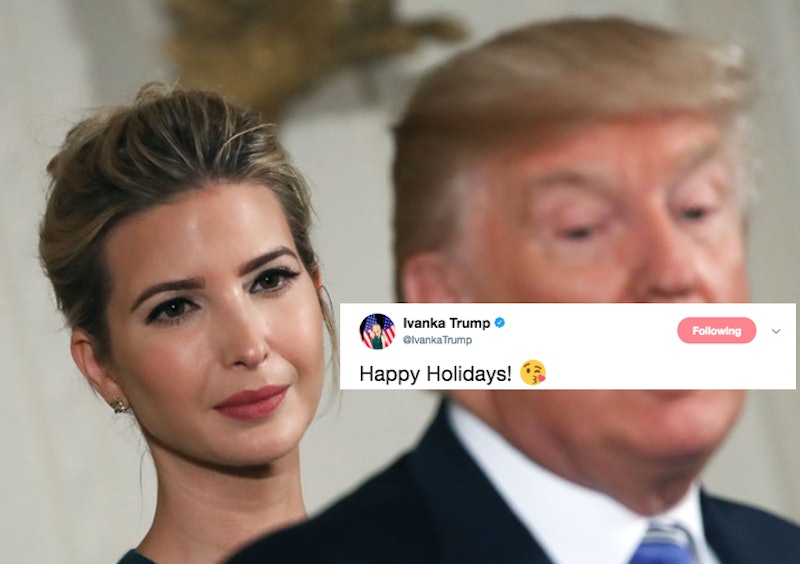 Presidential adviser and first daughter Ivanka Trump has had a pretty tumultuous run in the White House, as she fails again and again to live up to her promises to women. And as far as her father's feelings about her views go, this might not help: Ivanka tweeted "happy holidays" instead of "Merry Christmas" on Monday, directly contradicting her dad's years and years of aggressive insistence about the phrase being a weapon in the (basically wholly imaginary) "war on Christmas."

Ivanka converted to Judaism upon marrying Kushner back in 2009, leaving behind the Presbyterian Christianity of her youth. As such, it's not hard to see why she might prefer a more general, less specifically Christian holiday greeting. Although plenty of totally secular, non-religious people won't especially care or object to someone referencing Christmas to them, it's undeniably true that it's not as inclusionary as "happy holidays," a greeting that doesn't assume the religious faith or festive activities of the person being greeted.

In the past several years, and in particular over the last few days, President Trump has made a point of bragging about saying "Merry Christmas," often coupled with the totally and nakedly false implication that former president Barack Obama was somehow reluctant to say the words. In reality, Obama said these words constantly every year, just not at the exclusion of recognizing other faith or cultural traditions as well.

Moreover, the first photo she tweeted out showed her standing in front of a Christmas tree, and an American flag. Pretty on-brand for her dad's kind of culture war-infused nationalism, right? And yet, after spending so much time insisting on the importance of "Merry Christmas" — and creating a fundamentally fabricated reality in which the Obama administration was unwilling to say it — it's a little bit striking to see someone so close to the president using the same language he's derided as "political correctness."

Of course, it's impossible to say for sure what holiday plans the Trump family have ahead of them, although it's fair to say that Ivanka probably has a different routine this time of the year than her dad does. The White House has really been leaning into this Christmas thing, both from a decorating standpoint ― who could forget Melania Trump's hauntingly gothic Christmas hallway? ― and a messaging one.

During a recent rally in Pensacola, Florida, President Trump wished the assembled crowd of supporters a "Merry Christmas," and tied the message into the current Republican tax cut proposal, a plan which overwhelmingly benefits the richest Americans.

Let me begin by wishing each and every one of you a very Merry Christmas. ... I can think of no better Christmas present for the American people than giving you a massive tax cut.

The administration has also generated some Christmas-related controversy over its invite list for its annual party, as a pair of notable White House press corps journalists, April Ryan and Chris Johnson, were not invited to attend. Ryan, a CNN contributor and correspondent for American Urban Radio, is black, while Johnson is the chief political and White House reporter for the LGBT publication Washington Blade. The White House reportedly described their exclusions as an "oversight," while Ryan alleged that the administration has "disdain" for her.