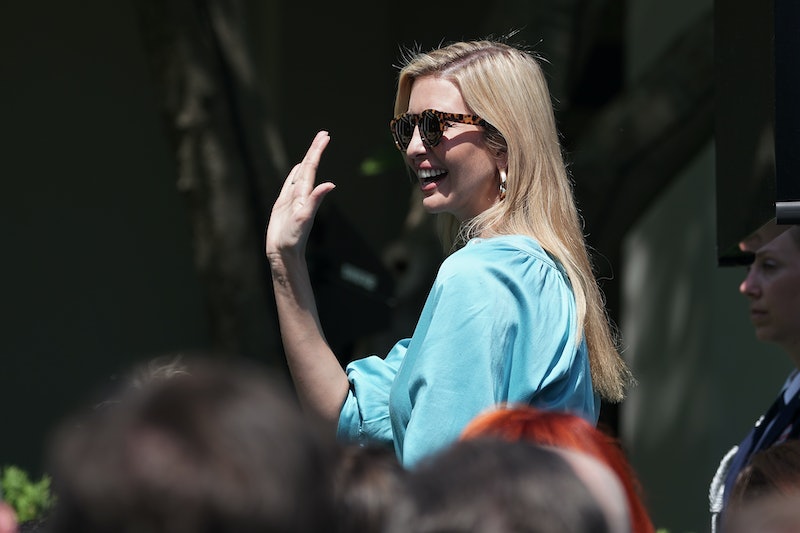 At a gala in Washington D.C. Wednesday, Ivanka Trump was given an Internet Freedom Award by the Internet Association, a lobbying group that represents tech companies. In a press release, Internet Association President and CEO Michael Beckerman praised Trump's "extraordinary contributions to public policy and the internet economy." The award was presented just shy of a year after the FCC's net neutrality repeal took effect.

"Over the past two years, Advisor to the President, Ivanka Trump has focused on closing the skills gap so that all Americans are prepared to compete for the jobs of today and tomorrow," Beckerman said in the press release. "Ms. Trump helped launch the American Artificial Intelligence Initiative and steer the bipartisan National Quantum Initiative Act into law, both aimed at increasing our nation’s prosperity, enhancing our national and economic security, and improving quality of life for the American people."

The Internet Association's membership comprises most heavy hitters in the online tech industry, including Google, Amazon, Microsoft, Lyft, Uber, Twitter, LinkedIn, and more. In explaining why the Internet Association decided to give Trump the award, Beckerman cited various laws that Congress passed and which Trump supported, as well as some independent commissions and initiatives with which the first daughter is involved. Trump tweeted that she was honored to receive the award.

"She spearheaded efforts to direct the Department of Education to devote at least $200 million in grants annually to the promotion of high-quality STEM education, in particular computer science, and galvanized the private sector to commit an additional $300 million to Computer Science education programs," Beckerman wrote. "She championed the modernization of the Perkins Career and Technical Education Act, making more than $1 billion available for in-demand career and technical education programs and reaching more than 11 million students in high schools and community colleges."

Despite the award's name, most of the accomplishments Beckerman credited Trump with are aimed more at increasing education and employment opportunities, or funding tech-related initiatives, than directly expanding internet freedom.

For instance, Beckerman explained that Trump helped "steer" the National Quantum Initiative Act into law. This legislation, which was unanimously approved in the Senate, created several new federal committees tasked with researching quantum physics technology. Beckerman also noted that Trump co-chairs the White House’s National Council for the American Worker, which is aimed at providing workplace training for Americans.

On social media, though, many took issue with the Internet Association's decision to give Trump the award, noting that the administration she works in spearheaded the repeal of net neutrality in 2017. Incidentally, Nancy Pelosi was given a lifetime achievement award at the same event, in part, for her role passing "strong, enforceable net neutrality legislation in the House this year," according to organization's press release. The organization also credited Pelosi with her legislative efforts to "bring inclusion and opportunity to STEM initiatives, advancing efforts to expand STEM to include the arts and helping increase access to STEM-career pathways for underrepresented students."

More like this
Here’s How To Turn On Instagram Post Notifications
By Megan Grant and Alexis Morillo
Here’s How To Find Your Apple Music Replay For 2022
By Melanie Mignucci
How Does The Hinge Algorithm Work? An Insider Explains
By Lexi Inks
Here’s How To Make The Spotify Music Festival Lineups Taking Over Instagram
By Alexis Morillo
Get Even More From Bustle — Sign Up For The Newsletter