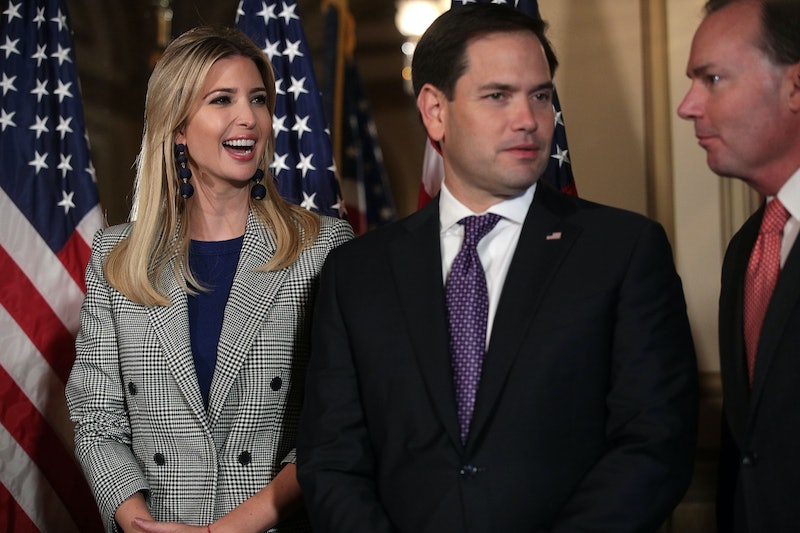 As of Tuesday night, when the Senate GOP released a revised version of its tax plan, Ivanka Trump's goal of expanding the Child Tax Credit — which she's been pushing since she first arrived in Washington, D.C. — is nearly in her reach. Ivanka has argued that giving more money to parents in the form of a tax credit helps them "afford the costs of raising and caring for their children." Unfortunately, now that the latest version of the tax bill has come out, the math doesn't look great for lower-income families, according to one analysis by a progressive think tank.

"We need a tax code that reflects the modern reality," Ivanka Trump said at an invitation-only event last week in New Jersey, speaking about changes to the workforce and American families since the current tax code was written.

But this new tax credit benefits wealthier families over poorer ones, according to a report from the Center on Budget and Policy Priorities. Under current law, a family of four in which the parents earn $500,000 per year makes too much to qualify for the Child Tax Credit, or CTC. The latest Senate tax plan, however, offers that same family as much as a $4,000 credit. By comparison, a single mom earning minimum wage who brings home $14,500 per year would receive just $75 more under the Senate plan than under current law, according to CBPP.

Sharon Parrott, a fellow and senior counselor at the think tank, tells Bustle that the wrong priorities are at play in the Senate Republicans' tax plan. "You might have thought that if the Senate was going to spend $68 billion in 2019 and about that amount going forward — almost $600 billion over the next decade — that they would have fixed this problem, that it would have been a priority to get more help for the families that have the hardest time providing for their kids," she says.

Under current law, the CTC provides families with a $1,000 tax credit per child. Senate Republicans' plan would double that amount to $2,000 per child. The CTC is partially refundable, which means some of that credit goes back into the family's pocket — but just how much of it gets paid to the family increases with its income. A family with two kids must earn $16,333 in order to benefit from the full amount of the CTC. And a family must earn at least $3,000 to see any of the credit refunded to it at all.

To fully understand, take the example mentioned above of the single mom of two kids working a minimum wage job. Because she makes $14,500 per year, the rules about refunding the CTC come into play. Under current law, the maximum amount of the CTC that could be refunded to this single mom is 15 percent of her earnings over $3,000—that's $1,725.

Additonally, under current law, there's also a limit to how much a family can earn and still qualify for the CTC. Right now, the benefit starts phasing out for married couples making $110,000 or more and everybody else earning $75,000 or more. Senate Republicans' plan would that raise that limit to $500,000, which explains why a couple with two kids bringing in that kind of money would be getting the full $4,000 break under the GOP's proposal.

Another $1,000 per child could be a huge help to struggling families, but they won't see that kind of increase under the latest Senate plan, Parrott explains. Lower-income families will still be limited to a refund that's 15 percent of their earnings above $2,500, compared to 15 percent of their earnings above $3,000 under current law. According to the CBPP's report, the families of some 10 million kids would get only that small increase.

And that's not the only part of the proposal that would negatively affect middle-income Americans. Because the CTC is only partially refundable, a family can't get back the full amount of the credit in cash just for filing taxes; some of that credit is applied against what the family owes in federal income taxes. Under Senate Republicans' plan, there's a cap on that refundable portion of the tax credit: it can reach just $1,000, adjusted for inflation. This cap applies to another 16 million children and their families, according to CBPP.

"When you take that all together, it's about one in three kids whose parents will get a token increase or less than the full amount that's available to higher income families," Parrott tells Bustle.

Bustle reached out to Sen. Orrin Hatch (R-Utah), who introduced the Senate bill, and the White House about the CTC expansion, but did not receive a response. Bustle also reached out to Sens. Marco Rubio (R-Fla.) and Mike Lee (R-Utah), who praised the expanded CTC and first introduced similar legislation. Staff from both senators suggest to Bustle that they support tying the credit to payroll taxes.

Parrott tells Bustle that would result in a bit more money for lower-income families, but nothing near the full $4,000 credit the Senate plan would make available to wealthier families.

"That just shows the priorities," she adds. "They could have taken the same amount of money and directed it in a way that would have helped more families that were really struggling."