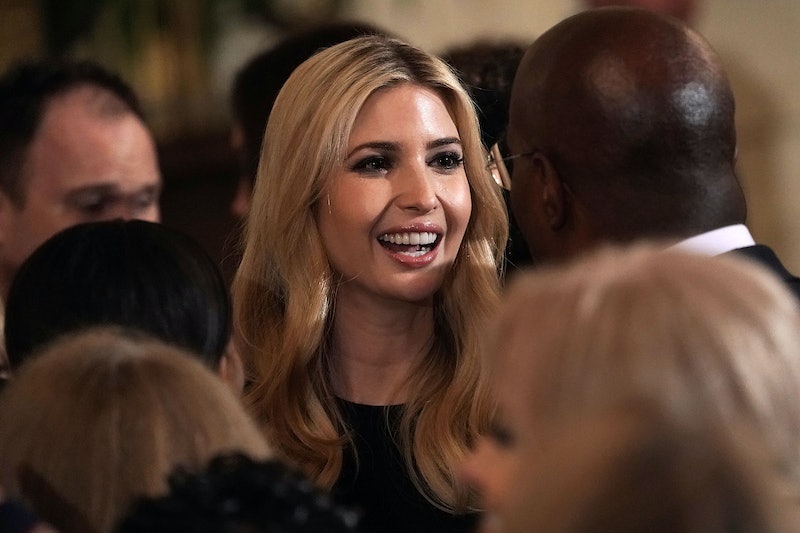 After President Trump's summit with North Korean leader Kim Jong Un, Ivanka Trump wrote in a tweet that “those who say it can not be done, should not interrupt those doing it.” She was criticized for referring to the idiom as a "Chinese Proverb," as experts say it's anything but. On Tuesday, Ivanka responded to criticism of her "Chinese Proverb" tweet — sort of.

"I see this quote has variously been attributed to Confucius and George Bernard Shaw, so shall we split the difference and say it was Churchill?," journalist John Geddes wrote in response to Ivanka's original tweet.

According to the New York Times, there's no evidence that the saying Ivanka quoted is Chinese in origin, although users of the Chinese social media service Weibo did propose several Chinese sayings that bear a passing resemblance to the phrase Ivanka quoted ("Don't give advice while watching others playing a chess game," for instance). As Geddes noted, some have attributed the saying to the Irish writer George Bernard Shaw; according the website Quote Investigator, however, there's no record of Shaw saying it, either.

Quote Investigator did find a version of the saying in a 1903 periodical called The Public, which attributed the saying to the humor magazine Puck. A week later, though, a different newspaper also quoted the idiom but attributed it to Saxby's Magazine. Quote Investigator reports that it's unclear which publication used the phrase first.

This isn't the first time Ivanka has come under fire for erroneously saying that a popular idiom was Chinese in origin. The New York Times reports that in 2013, she wrote in a tweet that Confucius coined the phrase, "Choose a job you love, and you will never have to work a day in your life." But according to Quote Investigator, that saying first popped up in a 1982 edition of Princeton Alumni Weekly, in which a philosophy professor was quoted as saying that an "old-timer" he once knew used the phrase. Quote Investigator added that job flexibility was very limited in China in 5th century B.C. China, when Confucius was lived, so the phrase wouldn't have had much utility in his era.

Ivanka also misattributed a quotation in her 2017 book Women Who Work, which credits the phrase "If your actions inspire others to dream more, learn more, do more, and become more, you are a leader" to John Quincy Adams. According to PolitiFact, however, Adams said no such thing, and Quote Investigator reports that the earliest on-record instance of that quote is in fact from country music singer Dolly Parton — although Parton's version referred to one's "legacy" instead of their "actions." Incidentally, Ivanka's father Donald made the same error in a 2015 tweet.

Many criticized Ivanka on Tuesday for her "Chinese Proverb" flub.

"There’s plenty of wisdom and insight in Asian philosophy, culture, religious systems, etc," tweeted Michael Li late on Monday. "It would be nice if more people had actual knowledge and appreciation of it instead of relying on made up things like this."

"'Anything sounds more important with quotation marks and a generic Chinese person saying it.' -Chinese Proverb," joked comedian Jenny Yang, who has since changed her Twitter handle to "Jenny Chinese Proverb Yang."

Larry Herzberg, a professor of Chinese at Calvin College in Michigan who co-wrote a book on Chinese proverbs, told the Times that Ivanka may have attributed the quotes as she did because "it sounds more legitimate and credible to pronounce a quote coming from the ancient civilization of China."

Bill Kristol, a Republican writer who opposes the Trump presidency, quipped that Ivanka is "giving our proverbs to China, increasing our proverb deficit."

More like this
Jennette McCurdy’s First Kiss On 'iCarly' Didn’t Go As Planned
By Bustle Editors
50 Books To Read With Your Book Club
By K.W. Colyard
The First Trailer For Zac Efron’s 'The Greatest Beer Run Ever' Is Action-Packed
By Charlotte Moore and Sam Ramsden
Dr. Anna Pou Is Still Practicing Medicine After Facing Murder Charges
By Brad Witter
Get Even More From Bustle — Sign Up For The Newsletter