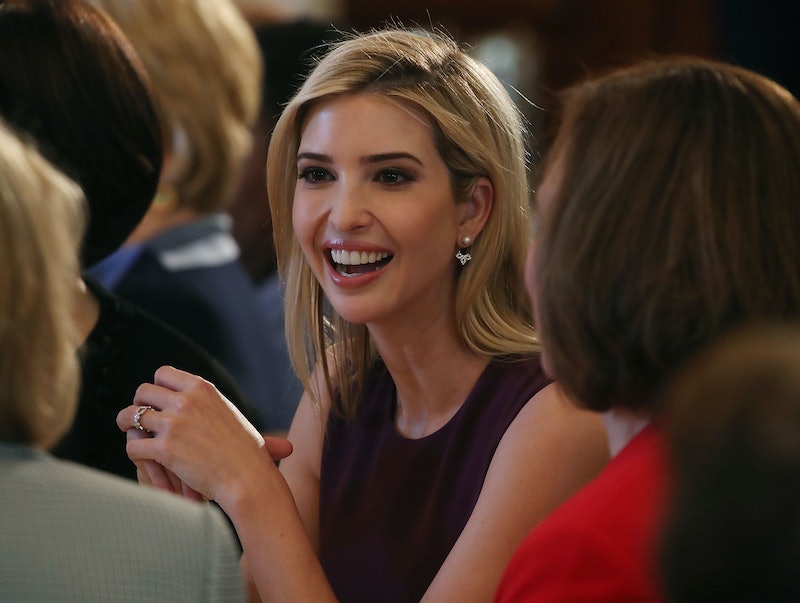 On March 11, Saturday Night Live aired a commercial parody for a scent called "Complicit," featuring host Scarlett Johansson as Ivanka Trump. The ad featured Johansson walking into a party in a shimmering gown, as a voiceover narrator describes her: "A feminist, an advocate, a champion for women, but, like, how?" The voiceover ends: "Complicit: The fragrance for the woman who could stop all of this but won't."

The skit prompted an uproar on the internet, in part because it was one of the first times SNL had taken aim at the younger Trump. But the ad also touched a nerve because it crystallized a common feminist critique of Ivanka Trump: that despite her bona fides as an advocate for working women and such progressive causes as paid maternity leave, in practice, she's little more of a feminist than her loud-mouthed, woman-hating, anthropomorphized merkin of a father.

Ivanka’s cheerful brand of corporate feminism brings to mind an archetype coined during a more innocent time, when President Obama was still in office and Pepe the Frog was merely a form of social currency for nerds on 4chan. Gillian Flynn’s famous “Cool Girl” passage from her novel Gone Girl describes a:

Cultural commentators have identified Jennifer Lawrence and Olivia Munn — actors whose anything-goes approachability and love of fart jokes are only paralleled by their conventional hotness — as past Cool Girls.

We don’t know whether Ivanka Trump loves football, poker, or burping (though her demure, Princess of Monaco-like persona would seem to suggest otherwise). Yet with her allegiance to her racist Daddy and seeming subservience to her cornfed, perpetually aw-shucks-looking husband prioritized over any actual feminist actions, Ivanka Trump personifies the Cool Girl to a T. For all of her bloviating about supporting middle-class women, Ivanka is a woman whose feminism is aimed at propping up the fragile egos of powerful white men. Because what defines a Cool Girl, above all else, is the desire — in some cases, the compulsion — to attract male approval for male approval’s sake, without appearing as if she is striving for male approval at all.

Ivanka Trump may be the most dangerous Cool Girl of all — in part because she has the largest platform in the world to spread her particularly insidious brand of feminism. Both Ivanka and the Cool Girl embody a noxious brand of toothless femininity, one that allows women to gain power by perpetuating male supremacy, rather than challenging it.

For the Cool Girl Feminist, feminism is not so much a set of ideals as it is a performance, a way of cloaking herself in identity politics while failing to adhere to those principles in her own life.

Thanks to her wealth and status, Ivanka personifies a very specific, high-end type of Cool Girl, one with a boarding school education, designer wardrobe and a BFF-ship with ex-wives of media moguls. But this brand of Cool Girl Feminism isn’t limited to rich white women; indeed, we can recognize it in our own lives.

The Cool Girl Feminist constantly extolls the power of her #girlsquad, crowing that chicks always come before dicks, amirite ladies, while regularly snapping nudes to her best friend’s ex. She went to the Women’s March, but she also fired her maid of honor for wearing toenail polish that didn’t precisely match the shade of her dress. She is (usually) white. She is (usually) upper middle class. And she’s usually married, often to a man named Josh or Justin or (no surprise) Jared. For the Cool Girl Feminist, feminism is not so much a set of ideals as it is a performance, a way of cloaking herself in identity politics while failing to adhere to those principles in her own life. It's the ultimate power move, by way of ensuring that she constantly has male approval.

The one trait that defines the Cool Girl Feminist above all others, however, is that she goes out of her way to appear as non-threatening to men as possible. The Cool Girl Feminist paints herself as the exception to the rule, the one woman who proves that feminists don’t have to pose a threat to traditional masculinity, that a woman can advocate for gender equality without being loud-mouthed or hairy-pitted or grim-faced. She is polite, soft-spoken, and expertly groomed; and if, like Jennifer Lawrence and Olivia Munn, she has the body of an Icelandic yoga instructor, so much the better.

For the past two years, Ivanka Trump has fashioned herself as the ultimate Cool Girl Feminist, repeatedly touting her own feminist credentials as a successful self-made entrepreneur and an advocate for working mothers, even penning a book called Women Who Work. (It is, in fact, she who pushed Trump to develop a paid maternal leave policy, a move that has been lauded as progressive despite the fact that it ignores fathers’ role in child-rearing altogether.)

You can almost hear conservative men's inner monologue: “Sure, she’s a feminist, but she’s nothing like the ball-busting bitches from my office. For one thing, she’s hot.”

The fact that she is conventionally beautiful only helps to make her political views more palatable to many conservative males, who view her as external to their conception of what a high-powered working woman is. “She has more class in her pinky finger than most women,” one admirer wrote on the subreddit r/Ivanka, next to a photo of Ivanka in cocktail attire playing a video game (a Cool Girl juxtaposition if there ever was one). You can almost hear their inner monologue: “Sure, she’s a feminist, but she’s nothing like the ball-busting bitches from my office. For one thing, she’s hot.”

But it’s not Ivanka Trump’s pulchritude that makes her particular brand of Cool Girl Feminism toxic. Nor is it even the fact that she has stayed silent when her bloviating Annoying Orange of a father says things that are antithetical to her pro-working woman stance, such as that pregnancy is an “inconvenience” to employers, or that he hoped Ivanka would leave her job if she were sexually harassed at work (in a pre-election interview on Fox News, Ivanka replied to this with a bland generalization about how "harassment in general, regardless, sexual or otherwise, is totally inexcusable,” while avoiding holding harassers themselves accountable).

It’s that she claims to be an advocate for women, while simultaneously ensuring that in the eyes of the public, she is forever seen as subservient to men.

Take, for instance, Ivanka’s role in the Trump administration. Ethical issues of her proximity to the president’s inner circle aside, the second her father took office, she summarily shed all of her so-called “feminist” credentials — her high-powered job running her own brand, or even her role in her father’s company — to take a backseat role in the machinations of the Oval Office. Ivanka’s absence from the White House is particularly striking, given how visible she was on her father’s campaign trail. In the run-up to the election, she was trotted out time and time again, a thinly veiled effort to convince the American people that Trump was not a woman-hating, pussy-grabbing monster, or else how could he have raised such a smart, accomplished woman? The strategy worked, with so-called female “Ivanka voters” turning out in droves to vote for Trump based on their admiration of his poised, career-driven daughter. “If Trump produced someone that classy, that’s a testament to something,” one awestruck female voter told Buzzfeed’s Anne Helen Petersen.

Unlike her husband, who as a senior adviser has a central role in the Trump administration, Ivanka doesn’t have a title or, presumably, a salary commensurate with her role as a backseat adviser to her father. While she may very well wield immense power behind the scenes, in the public eye, she has no power at all. She’s not playing second fiddle to her husband or her father; she’s not even in the band.

Ivanka Trump is a pawn, a token, June Cleaver in a Sheryl Sandberg mask, someone who is pushed out into the spotlight to further the ambitions of the men in her life, only to scurry back into the shadows to change diapers and take coffee orders.

Following the election, Ivanka seems to have totally dispensed with the “working” part of her “working mom” persona. She stepped down as CEO of her own corporation to move to Washington, D.C., writing on Facebook that she wanted to “take time to settle our three young children into their new home and schools.” While there’s nothing wrong with stay-at-home motherhood in itself, or with taking pride in your identity as a mother, there is something deeply disturbing about Ivanka cultivating a brand based entirely on her ability to juggle work and motherhood, only for her to seemingly throw one of those balls in the air once it no longer serves her father’s needs. She is a pawn, a token, June Cleaver in a Sheryl Sandberg mask, someone who is pushed out into the spotlight to further the ambitions of the men in her life, only to scurry back into the shadows once she's done being of use to them.

And that, precisely, is what makes Ivanka Trump so dangerous as an icon of millennial female empowerment: There is absolutely nothing empowered about her. She exists solely as a means of propping up other men’s ambitions, someone who is, as Jill Flipovic writes, “Selling us traditional femininity and support of male power wrapped up in a feminist bow.”

If she were merely a political tool — a pretty, glossy-lipped figurehead for her father to trot out at conventions — that would not be so bad. But because Ivanka’s brand of Cool Girl Feminism is one that we see so often in everyday life — in the wives who turn their anger on the mistress instead of the husband, in the friend who sexts the man who broke your heart, in the lady boss who suck up to their male superiors instead of nurturing female talent, in every woman who claims to be for the empowerment of women while simultaneously doing everything in their power to ensure the continued empowerment of men — she is as potent an avatar for toxic white male supremacy as her own father.

In theory, feminism is supposed to be about the disruption of male power, about joining with your sisters in arms to dismantle the patriarchy, brick by brick. Ivanka is the woman putting the bricks back together, ensuring they don’t topple. And she is doing this at a time when we desperately need that tower to crumble.

More like this
Here’s Everything You Need To Know About Operation London Bridge
By Bustle UK
Black Women's Equal Pay Day Highlights An Upsetting Problem
By Brandi Neal
The Miraculous Real-Life Thai Cave Rescue Mission Still Resulted In 2 Deaths
By Brad Witter
10 Must-Read New Books Out This Week
By K.W. Colyard
Get Even More From Bustle — Sign Up For The Newsletter