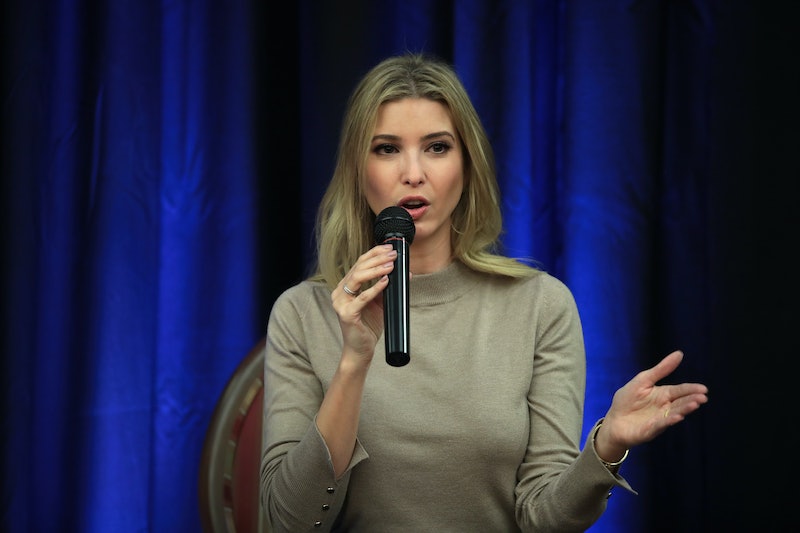 Last week, a handful of members of the House and Senate met in the Roosevelt Room to hear a pitch for Ivanka Trump's childcare plan. When Ivanka rolled out her proposal with her father on the campaign trail, she faced a wave of criticism from Democrats for the plan being neither sufficiently progressive nor expansive. However, according to a report in Bloomberg, the biggest flaw in the plan may be something that is less talked about: its huge cost. According to them, Trump's proposal would require as much as $500 billion in funding within a decade's time.

There has been critique in the past that Ivanka's childcare plan isn't feminist enough, due to the fact that it doesn't offer paternity leave in addition to maternity leave. As many experts have pointed out, when only a mother gets parental leave, it puts a pressure on her to take on disproportionate domestic familial responsibilities and bear the brunt of childcare.

Trump's current proposal is continuing to face criticism for not going far enough, particularly in regards to helping middle- and lower-income families. "It actually doesn’t help make child care affordable for the vast majority of working families,” Sheila Marcelo, founder of Care.com, told Bloomberg. The proposed childcare plan offers deductions for childcare costs to individuals making under $250,000 a year, as well as couples earning less than $500,000 a year. Because many lower-income families don't owe income tax, the deductions would benefit well-off dual-income families, who have fewer issues affording childcare in the first place.

However, in this case, the obstacle in the president's daughter's way may not be Democrats who think Ivanka's childcare plan favors the rich, but rather, the Republicans in Congress reticent to funnel the estimated $500 billion in federal government revenue toward the plan.

A report from Time on the cost of Obamacare in 2016 stated that the federal government funneled $110 billion toward it, and estimated costs of $1.34 trillion over a decade. Considering the fact that at the beginning of January, the House voted to repeal the Affordable Care Act, which would leave millions of people uninsured, Ivanka's plan could also potentially face opposition from her own side of the aisle because of its high price tag and even more niche appeal.

While Ivanka's plan in action would still benefit well-off families, the high price tag for the federal government may prove a hard sell, considering the fact that the House GOP tax reform blueprints drafted in 2016 contained no mention of childcare. Trump's proposed tax cuts would add to the federal deficit, and therefore, Ivanka's plan would add even more financial strain on a newly proposed set of financial policies.