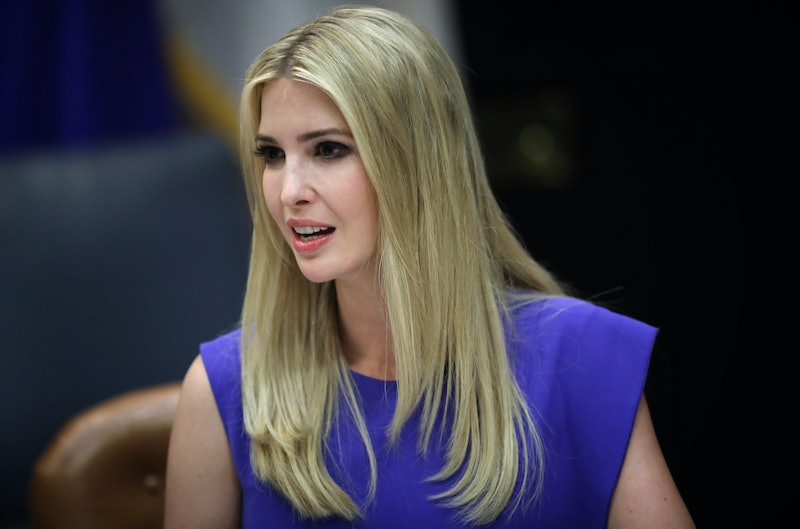 More than a year into Donald Trump's presidency, first daughter and senior advisor Ivanka Trump's plans to push paid family leave were still viewed as a nonstarter. Then on Monday, in a surprising shift, the Congress announced a Senate committee hearing on Ivanka's paid family leave policy initiative.

The hearing is set for July 11 with the Senate Committee on Finance, which handles Social Security matters, as well as other health and human services programs. Republican Senator Joni Ernst and Democratic Senator Kirsten Gillibrand, both outspoken advocates of paid family leave, are expected to testify.

According to Axios, Ivanka has been working with senators in both parties to build support for her plan. In February, after the president mentioned his support for paid family leave in his State of the Union address, Ivanka joined forces with Sen. Marco Rubio, who has helped her advocate for the idea among more conservative Republican lawmakers.

According to Politico, the GOP's hesitance to accept paid family leave comes from an opposition to higher taxes and any requirement on employers to comply with the program. Ivanka's policy plan solves at least one of those problems — instead of raising taxes to pay for leave, she is proposing that employees be allowed to take money out of their Social Security benefits, consequently deferring their benefit checks when they get to retirement age.

Currently, under the Family and Medical Leave Act (FMLA), employers are required to provide 12 weeks of leave to their employees — the catch? The law only applies to companies with more than 50 employees (about 60% of employers), and the leave is unpaid.

For “people that I know and interact with, going two weeks without a paycheck is catastrophic,” Rubio told Politico in February. “Imagine going two months or three months… They gotta give you time under the law, but you don’t get paid. It’s just not a sustainable thing.”

Ernst, along with Rubio and Republican Senator Mike Lee, supports a similar version of Trump's paid family leave plan, put forth by the Independent Women's Forum (IWF) in January. Both plans are described as "budget-neutral", but have been criticized for their potential to destabilize the already under-funded Social Security program.

In her Wall Street Journal op-ed, Trump wrote that her plan would "[solve] the persistent gender and minority pay gap that exists in part because of prolonged periods away from the workforce and challenges with re-entry." But critics have also pointed out that the existing gender pay gap means that on average, women have less money to pull from Social Security than men, and therefore would be penalized more for taking leave.

The Washington Post columnist Elizabeth Bruenig pointed out that this approach would also disadvantage larger families more than smaller ones, and force lower-wage workers to continue working longer into retirement age than their wealthier counterparts, who would likely have more benefits and be able to save more. The dynamic is particularly unfair, she argues, because of the significant life expectancy gap between rich and poor.

Gillibrand has sponsored her own version of paid family leave, called the Family and Medical Insurance Leave Act (or FAMILY Act), which would be funded by small employer and employee contributions — 0.2% of the employee's wages per week, each, which is about $2 on average.

"Any plan that robs the Social Security trust fund will hurt low-income workers, seniors and women the most," she said in a statement in February. "Women already receive less Social Security benefits than men, and this plan only exacerbates that problem."

Gillibrand's bill, while supported by Senate Democrats, has not garnered enough traction to reach a committee hearing yet. Politico reported that Trump might be willing to raise payroll taxes to fund paid leave, in order to get it through Congress, suggesting there could be room for compromise.