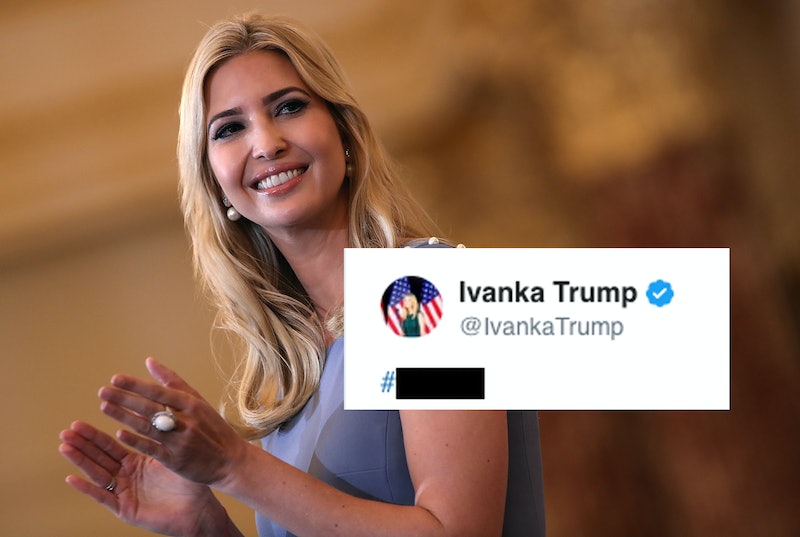 As if the meme needed to become more popular, Ivanka Trump has joined the Laurel/Yanny debate. Referring to the audio clip of a voice reading either the word "Laurel" or "Yanny" over and over (people hear it differently) that went viral this week, the first daughter shared the word she hears.

"#Laurel," she tweeted on Thursday.

The Laurel/Yanny phenomenon took off when YouTube star Chloe Feldman popularized a preexisting meme by posting it on Twitter on Monday. The meme's creator spoke out on Wednesday to tell the world that the voice is in fact saying "Laurel," not "Yanny," but that hasn't stopped people from weighing in. Even Ivanka Trump, one of the most powerful people in the world, couldn't resist.

Technically, there isn't really a right answer in this debate. Cognitive neuroscience professor Lars Riecke told The Verge that the sounds your ears perceive from the clip "can be organized in two alternative ways"; in other words, both "laurel" and "yanny" are valid ways of perceiving the sound.

But if there were a correct answer, it would be Trump's. That's because the audio was originally taken from the Vocabulary.com entry for "laurel." A high school student played the audio while studying for a vocabulary test but heard the word "yanny" instead. She shared her observations in class, another student posted a poll about it on Instagram, and yet another student shared the poll on Reddit. Chloe Feldman took it from there.

So why do people hear different things from the same clip? When your brain is trying to identify words, it makes inferences based on audio input and contextual clues. "We do a lot with what little auditory information goes into our brain, so we're constantly making predictions," communications science associate professor Dr. Bharath Chandrasekaran explained to ABC.

We make wrong inferences all the time — think of anytime you've ever misheard someone. This audio is particularly difficult to understand because it's distorted and lacks the context (unless you're looking at it on Vocabulary.com) that could help your brain make the correct assumption about what the word is supposed to be.

The Laurel/Yanny audio is pronounced by an opera singer who recorded over 36,000 words for Vocabulary.com, Wired reports. Maybe because it was poorly recorded, because it's been rerecorded multiple times, or for some other reason, the viral clip is distorted with extra frequencies. When your brain hears primarily the audio's higher frequency range, it perceives "yanny." When it mostly hears the lower frequencies, it perceives "laurel."

Neuroscientist Britt Yazel filtered out all the higher frequencies for NPR and found that the definitive sound "laurel" remained. Removing the upper range "takes away the entire perception of hearing the word 'yanny' and all you get is the word 'laurel,'" he said. "If you lose the high frequencies, the illusion goes away."

Wired noted that when people lose their hearing as they age, the higher frequencies are often the first to go, which means that younger people could be more likely to hear "yanny." (Of course, the "laurel"-hearing Trump is 36; people typically don't start to lose their hearing from age until their late 60s, according to the National Institute on Deafness and Other Communication Disorders.) Laptops and smartphones often over-emphasize higher frequencies because their speakers are small and don't have the space to accommodate a rich lower range. So maybe Trump was listening to Laurel/Yanny on pristine speakers.

But it's useless to speculate too much about why Trump heard "laurel" instead of "yanny." It's possible to hear the audio differently under any set of circumstances.

"With a recording that's somewhat ambiguous and low-quality, it's not surprising that some people may flip those when they're perceiving that word," hearing sciences professor Brad Story told NPR.