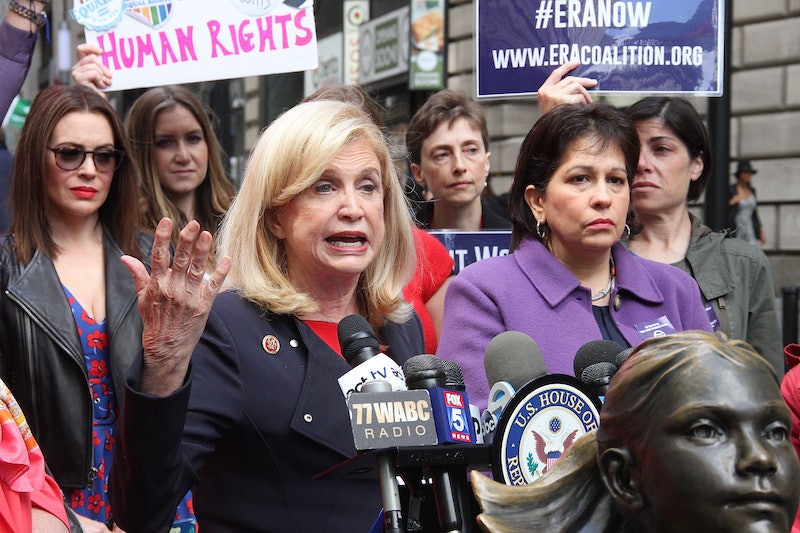 Mediapunch/Shutterstock
By Carolyn B. Maloney
March 13, 2019

In this op-ed, New York Congresswoman Carolyn Maloney explains why the Equal Rights Amendment still hasn't been ratified, her efforts over the last 20 years to change that, and why she thinks 2019 could be the year.

After the results of the midterm elections rolled in, the term “year of the woman” was revived — and then mentioned over and over again. Women made historic electoral gains, broke records in Congress, and demonstrated our power at the ballot box. But now we need to look forward to a truly equal future for women. I want to build on these victories and secure legal protections for all women in the U.S. Constitution by finally ratifying the Equal Rights Amendment.

Congress passed the ERA 47 years ago, but in 1982, the ratification deadline expired without securing approval from the 38 states required to amend the Constitution. For decades afterward, the ERA was all but dead.

This year, though, you may have noticed the members of Congress wearing “ERA YES” buttons during the State of the Union address. Although the button logo harkens back to the battle for the ERA in the 1970s, the message the amendment would send is just as relevant today.

Women make up more than half of the population in the United States, but our rights to do anything other than vote are nowhere to be found in the Constitution — and that omission has very real consequences in court. In 2000, the Supreme Court struck down a provision in the Violence Against Women Act that granted victims of sexual assault a private right of action against their attackers. Last year, a U.S. district judge ruled that Congress did not have the authority to criminalize female genital mutilation, which is universally considered a human rights violation. Some scholars believe that if we had an ERA, there would be a constitutional protection against sexual assault, a crime whose victims are disproportionately women.

We must seize this moment because we may not get this chance for change again.

We can advocate for policies and laws that combat discrimination against women, including pregnancy discrimination, sexual harassment and assault, and the gender pay gap. But with an ERA, we get the legal bedrock we need to enforce these laws. A constitutional amendment protects women from the whims of who controls Congress, a statehouse, or the White House. It can change the document that Supreme Court justices use to interpret and decide cases.

I have introduced the ERA 12 times in Congress, and in the last 20 years, I have never seen the level of enthusiasm we’re seeing now in the fight for women’s equality. Women are marching for our rights. We are organizing. We are running for — and winning — public office. Movements like the women’s marches, #MeToo, and Time’s Up are galvanizing women in this country. We must seize this moment because we may not get this chance for change again.

In both the House and Senate, we are pushing forward with legislation to reaffirm bipartisan congressional support for the ERA. In the House of Representatives, I have reintroduced a bill, H.J. Res. 35, co-led by Rep. Tom Reed (R-NY) that would restart the ratification process without a deadline and add the word “women” to the Constitution. Rep. Jackie Speier (D-CA) has introduced a bill that would eliminate the 1982 ratification deadline, as have Sens. Ben Cardin (D-MD) and Lisa Murkowski (R-AK) in the Senate.

Now the race is on to become the 38th state to ratify the ERA. There are campaigns pushing for ratification in Virginia, Arizona, and North Carolina.

For too long, those in power have said no to the ERA. But the American people are telling us loud and clear that they will only take yes for an answer when it comes to enshrining women’s equality in the Constitution. Any candidate asking for your vote should have to tell you that they will vote yes for women’s equality. And that litmus test should be applied to both Democrats and Republicans.

The Constitution is an expression of American values and ideals. What does it say about our country when we refuse to say definitively that the law prohibits discrimination against women?