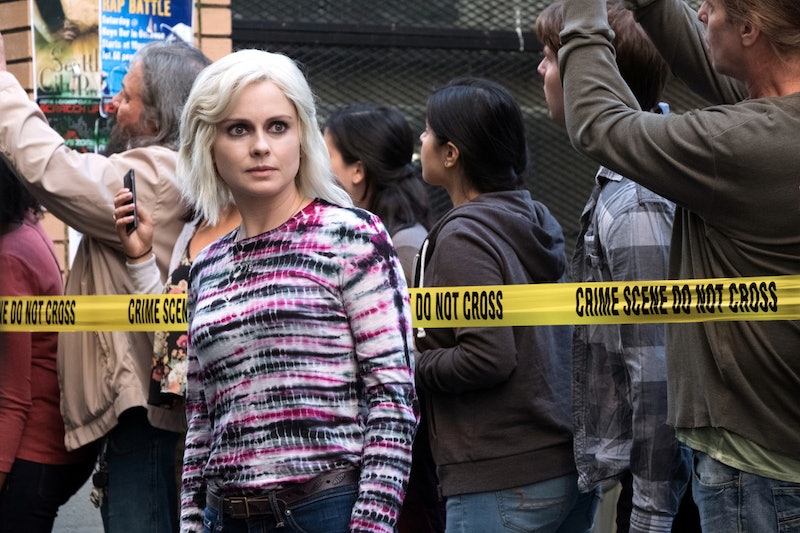 When describing iZombie to someone who has never seen it, it's hard not to make it sound like a joke: "A zombie, a medical examiner, and a police detective walk into a morgue... " But The CW's "zom-rom-com" is so much more than just a punchline. Full of heart and — yes — braaaaiiiins, iZombie Season 4 manages to tell a gritty sci-fi story filled with touching friendships and heartbreaking romance without missing a chance to make you laugh along the way. Whether it's from all the different personalities that Liv Moore (Rose McIver) portrays from every brain she eats to the punny comic strip title that labels each scene, iZombie has been redefining what the zombie genre can be for three seasons so far (so back off, Santa Clarita Diet).

With Season 4, the smart, witty and heartfelt comedy from Rob Thomas and Diane Ruggiero is getting more tense than ever before. By the end of the Season 3 finale, zombies living in secret in Seattle had been outed by military outfit Fillmore Graves, and their plan for survival was simple: build a wall around Seattle, trapping in every zombie and human, and promise not to infect any more humans as long as the U.S. government donates human brains to the walled city. Seattle would become a zombie utopia and the zombie virus wouldn't spread any further. It sounds simple enough, but that plan requires the rest of the country to comply with Fillmore Graves' new world order. When a cold war begins to take shape between humans and zombies, how will iZombie keep its comedy alive?

McIver, for her part, isn't worried about losing the lightness that makes iZombie stand out from every other zombie TV show or movie. Sitting down with Bustle on the Warner Bros. lot in Burbank, Calif., the New Zealand actress is confident that they "manage to hold on to the heart and characters and the concept of the show."

"But by Season 4 you need to be doing something different," she says, putting her lunch aside as she leans forward. "It needs to have some severe reinvention and I feel like now that zombies are widely known about, that makes a big difference. It's the context now that we set everything in. The whole world just feels so much bigger this season."

When showrunners Thomas and Ruggiero first clued McIver in to what Season 4 would look like as it takes on a much more dystopian and wartime feel than its earlier, reality-set tone, she became excited.

"It is a bit nerve-wracking," she admits. "Part of what the show has been based around has been Liv's discretion and needing to hide herself so much. I'm really happy with the way it's playing out but it was a daunting prospect to think about how this new picture was going to look."

She calls the game-changing shake-up "wise" when it comes to the world-building that Thomas and Ruggiero had to do for the new season. "They've taken this great risk and it's paid off," McIver says. "The walled city itself, seeing the actual wall, it just creates immediately higher stakes and real physical threat and the sense that there's potentially an us vs. them. It lends itself to the most amazing political parallels and all sorts of things that we try to draw from this season."

Seeing as how building a wall to keep a whole group of people out of the rest of the United States is incredibly prescient given that Trump keeps trying to do the same thing, iZombie won't be shying away from making those real-world connections this season. But what is most impressive is how seamlessly the show weaves that in to the entertaining plot and smart comedy without making overt comments or arguments.

"What this show does so well is it's still a zombie comedy show," McIver says. "It doesn't pretend to be this really heavy, dark, twisted show. It's fun, it's got more pop culture references, it's light, it's accessible. Those are the kinds of shows that we need to be making that tackle real world issues. That's how you reach people without being preachy."

The key to getting political in TV shows, according to McIver, is to raise questions without giving out the answers. And she believes this season of iZombie does just that.

"It just helps to — hopefully — hold up a mirror to some of what's going on," she says. "There are refugee elements we look at, there's an us vs. them, there's segregation and integration, all within the constraints of a zombie show. I think it's really effective and I think it will stimulate some conversations about things that certainly need to be spoken about right now."

She pauses, then adds, "It's nice that we can combine entertainment while hopefully lingering in your mind and make you think a little bit more about important issues."

So just how tense are things going to get between humans and zombies this season? Are we looking at a full-on war breaking out as things build to a dangerous climax? "That's very much the boiling pot that happens throughout this season, how long can this last the way it is?" McIver says. "There are such different sides of the fence that people are arguing for."

In fact, one of the central relationships on the show will find themselves on opposite sides of the debate now that Major (Robert Buckley) joined up with Fillmore Graves. "Liv and Major, we see them disagree about how they think it should be handled going forward," McIver teases. "Fillmore Graves have made a rather naïve decision to say, 'We'll take brain donations and zombies will live in the city and everything will be fine.' But actually brains become a very scarce resource, people get scared, people get desperate and stop acting tolerant and understanding and pacifist."

When iZombie's zombies aren't fed regularly, that's when they become the stereotypical mindless zombies from classic horror movies. So when Fillmore Graves doesn't get enough brains sent in from the U.S. government, things start to take a turn for the worse as Chase Graves' (Jason Dohring) careful plan starts to unravel.

"We start to see that and the cracks will start to show," McIver says. "People get hungry and desperate. When you're looking out for your own family and people you love, you don't follow a rulebook. Tension runs very high this season and Liv finds more of her identity through the way that she approaches it."

So with tension at an all-time high, how does McIver keep delivering on the comedy that fans expect to see from iZombie? She says she makes a pointed effort to lean into it.

"That's how you have to live life," she says. "In the darkest times, you have to laugh. I went to Ricky Gervais' stand-up show last year and he was talking about how one of his funniest days was his mom's funeral because it brought out these heightened, very sensitive coping mechanisms people have. So we feed that."

McIver credits her fellow castmates with keeping the vibe on set light and fun. "We create that on set from the very start, even in the most dramatic scenes, people tearing up and someone will get the fart machine out," she says. "We're like, 'Come on, you must be kidding!' But that's a coping mechanism. That is innately the tone of our show in general, that's how Rob Thomas and Diane Ruggiero write. If something gets too earnest or too sincere they put in a joke to remind us that tragedy and comedy are hand in hand."

Every episode, they accomplish that by introducing a new brain personality for Liv to act out. "Some of the brains we see this season, there is a lot of humor from those," McIver says with a big smile. "I'm on Ren Faire brain, germophobe brain. But one of my favorites is Major on professional performance wrestler brain. That is something that just made me laugh so, so much."

Her favorite brain that Liv eats this season is "musical theater brain."

"That was wonderful," she says with a laugh. "I get to do my [real] New Zealand accent for that one which was pretty cool. I didn't know exactly how that was going to fit into the show, and we wanted to use it at some point so it came out in such a funny way. That was such a fun episode to shoot."

The increasingly complex world-building of Season 4's zombies vs. human cold war is impressive, but McIver thinks it's more important to keep the heart and humor going in a genre not normally known for being light and funny.

"That's what I'm interested in," she says. "I like the idea that even the darkest movies I watch have a nice, dry sense of humor. For me, I don't go to watch something just to feel pain or to be confronted. It has to be entertaining as well, because life is short. Bringing some humor to any project I work on matters to me. A lightness and a bit of air has to be in there as well."

Thankfully, "everyone is on the same page with that" on iZombie. "Rahul Kohli who plays [Liv's BFF] Ravi certainly is," McIver says with a laugh. "The more that the writers have seen our dynamic with each other, the more they write to cater to that. All of our specific onscreen relationships are starting to mirror more our offscreen relationships with some of the jokes we bring in and the way we interact. We get a lot of help from the writers to do that but it matters to us to do that on set too." And with that, our desire to be BFFs with the iZombie cast only continues to grow.