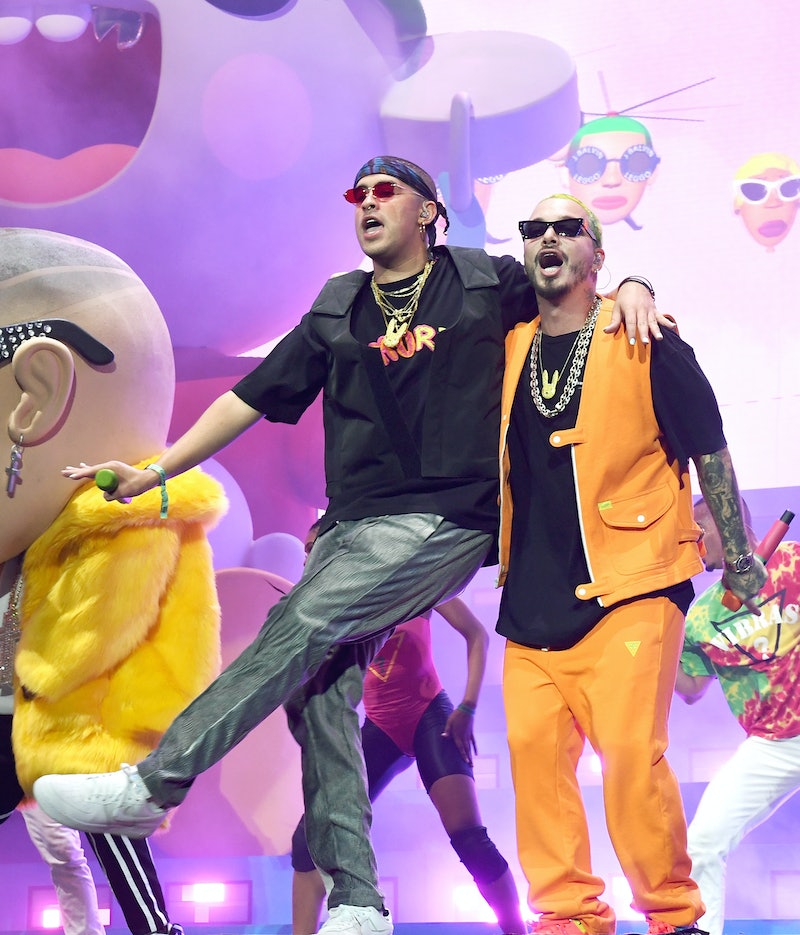 There were a lot of great performances at the 2019 Video Music Awards, but one certainly left fans scratching their heads. In fact, J Balvin and Bad Bunny's 2019 VMAs performance of "Qué Pretendes" was so trippy, it was basically a video game. And it had people on Twitter comparing the two to all kinds of animated characters.

The duo took the stage toward the end of the night, performing their new single "Qué Pretendes" while wearing exaggerated cartoon costumes that included round torsos, enormous hands, and toothpick-thin legs. It was sort of a cake pop silhouette, if you will. But while it might have thrown some viewers for a loop, it certainly added to the surreal and fun vibe of the song.

A few days before the performance, J Balvin spoke to MTV News' Dometi Pongo and promised to put on a show that would make history. "If it's not the best one," he teased, "it's the top two." Well, that is certainly up for debate — after all, this night alone included jaw-dropping performances from Missy Elliott and Lizzo — but J Balvin and Bad Bunny definitely delivered a performance fans won't forget.

The show, complete with a dancing cartoon star and giant, cartoon-like cacti, felt like it was straight out of a cartoon or a video game. In fact, it reminded many fans of one video game character in particular, with many on Twitter comparing the two artists to Dr. Ivo 'Eggman' Robotnik of Sonic the Hedgehog fame.

Meanwhile, the performance transported other fans to the land of Super Mario, otherwise known as Mushroom Kingdom. And, really, Mario and Luigi got nothing on J Balvin and Bad Bunny.

Of course, there were also fans who were a bit underwhelmed by the cartoon-inspired set.

This performance came just two months after J Balvin and Bad Bunny released their surprise joint album Oasis, a reggaeton and hip-hop inspired collaboration fans didn't even know they needed. In a way, both Bad Bunny and J Balvin don't really care about genres, just like they don't care about anyone's opinions either. "If tomorrow I want to release a rock album or I want to release a bachata album, nobody can tell me anything — why can't I?" Bad Bunny said in an interview with The New York Times. "We need to try to unite audiences, unite countries, join musical tastes, unite people."

Both proud Latin American artists, J Balvin and Bad Bunny have spoken about wanting to represent their culture, while also breaking barriers when it comes to the U.S. music scene. "It's just the beginning of a new global Spanish wave. I think we're really making a beautiful statement," Balvin said in the same New York Times interview.

More like this
Bridgerton’s Simone Ashley Stars In ODESZA's "Love Letter” Music Video
By Radhika Menon
An Ultimate Guide To The Music Of 'Rap Sh!t'
By Brad Witter
How Lady Gaga & Adele Are Closer To The EGOT All Of A Sudden
By Jake Viswanath
The Best Memes & Tweets About Beyoncé’s Surprise “I’M THAT GIRL” Video Teaser
By Brian Anthony Hernandez
Get Even More From Bustle — Sign Up For The Newsletter