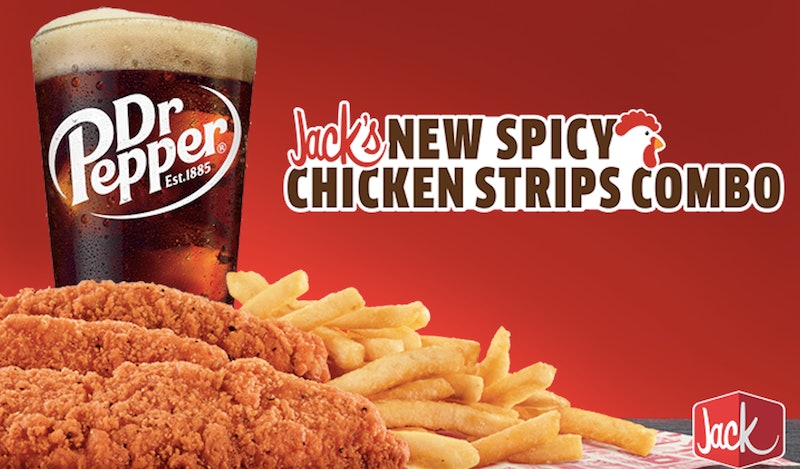 Jack in the Box

A zesty new option is about to hit your local Jack in the Box for a limited time only. Starting April 22, Jack in the Box is launching a new spicy chicken strips combo, and it’s gonna be caliente, baby. You’ll only get these spicy strips of chicken goodness for just over two months, so you’d better grab them before they’re gone.

The new spicy chicken strips combo will come in a three-piece or five-piece combo with small fries and a small drink, with pricing that will vary by market. Per Jack in the Box, the new spicy chicken strips are 100 percent white meat made with a crunchy batter — and with this new menu offering, you've got Jack in the Box's seven classic dipping sauces to choose from, including barbecue, Frank's RedHot buffalo, honey mustard, sweet and sour, teriyaki, and zesty marinara. And, of course, you can't forget the fan favorite: the house buttermilk ranch.

Pons kicked off the campaign by tweeting to the iconic Jack in the Box "Challenger-in-Chief" Jack Box on April 19 saying that she had “big ideas” for his chicken. The ad itself features Pons telling Jack Box she was literally “born” to pitch him her ideas, showing flashbacks of baby Pons with a chicken-strip pacifier as a baby, a chicken-strip stand instead of a lemonade stand, and Pons getting a chicken-strip tattoo that she demands the artist make “extra crispy.” Pons, who’s a Venezeulan-Italian-American, tells Bustle that she got to do the commercial in both English and in Spanish.

“It feels very good as digital content creator and a woman of color to have an opportunity to work with a brand as iconic as Jack in the Box,” Pons tells Bustle. “Jack in the Box really thinks outside the box. I’m really excited. I’m a comedian, and they’re really funny.”

The spicy chicken strips combo is a welcome addition to the Jack in the Box chicken menu, which currently has regular chicken strips and chicken nuggets. But your only spicy options come in sandwich form with Jack’s Spicy Chicken and Jack’s Spicy Chicken With Cheese, so something a little more munchable will be nice to have. It’s just too bad they’ll only be around for a couple of months.

You can get your hands on these new spicy chicken strips at any Jack in the Box location nationwide starting on April 22. But, remember, they'll only be around for a few months, so if you want to try them out, get some before they're gone.