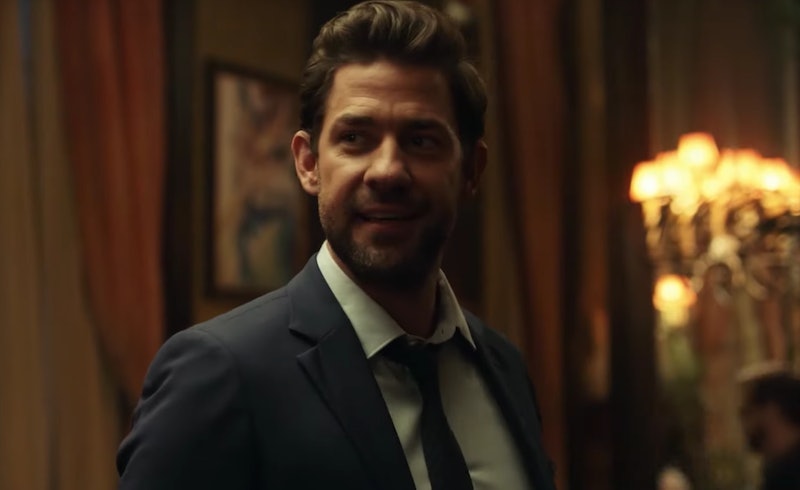 Season 1 of the Amazon series brought a brand new story to the Ryanverse, so it only makes sense that Jack Ryan Season 2 isn't based on a book by Tom Clancy, who introduced the character 35 years ago. Instead, Season 2 of the Amazon series is a continuation of the original Season 1 narrative. But that doesn't mean Clancy's Jack is behind us. According to showrunner Graham Roland, the character will always mirror the American hero fans fell in love with years ago.

In an August 2018 interview with The Hollywood Reporter, Roland explained that his initial intention, along with co-show runner Carlton Cuse, was to adapt his favorite Clancy novel Clear and Present Danger into a series. But as they dove in, they realized it was going to be a bigger challenge than they expected.

"We realized trying to update this story was going to take so much drastic reimagining to make it feel relevant today, that we might as well just make our own story up," he said. "That led us to the conversation of, okay, if we're not going to adapt one of the books, what are the things that Clancy fans are going to expect from this franchise?"

They expect the Jack they know and adore, despite the fact that the character has been played by four other actors prior to this series. Which is why Roland promised to maintain two of Jack's core defining attributes from the book series: his super intelligence and his vulnerable morality.

"Jack was a real moral hero, a classic hero, and so the source of drama around Jack was never going to come from some inner turmoil or him fighting his own demons," Roland said. "It was going to have to be his moralism being an obstacle in an amoral or sometimes immoral world. That's really where we were gonna have to drive most of our drama."

According to Krasinski, Season 2 does just that. It leads Jack from the Middle East to Venezuela, where he investigates a "potentially suspicious shipment of illegal arms," per Amazon, which unravels a wide web of conspiracies that take his investigation on multiple stops across the globe. In the process, he's antagonized, despite his good intentions, and he's forced to bring his morals into question.

Krasinski added that although this shift was fun for him to portray, it was slightly upsetting to watch Jack discover a harsh reality. "It was kind of sad for his character to see this pure, clean-cut, boy scout starting to make the choices that [Pierce] had told him he'll have to make one day," he said.

The production of a Jack Ryan Season 3 has already been announced by Amazon, and according to an Oct. 24 report from Variety, a new show runner, Prison Break's Paul Scheuring, has joined the crew after Cuse's decision to step away from his show runner role.

Right now, it's unclear what Scheuring's presence means for the show's long-term plan, or for Krasinski's Jack. One thing's for sure: he definitely has some big promises to keep about Jack's character.

More like this
Yes, 'The Price Of Glee' Is Available To Watch In The UK
By Catharina Cheung
Everything To Know About The 'Daisy Jones & The Six' TV Series
By Maxine Harrison and Brad Witter
The Song At The End Of 'The Last Of Us' Ep 1 Has A Deeper Meaning
By Sophie McEvoy
'Mayfair Witches' Already Changed 2 Major Characters From The Books
By Grace Wehniainen
Get Even More From Bustle — Sign Up For The Newsletter
From hair trends to relationship advice, our daily newsletter has everything you need to sound like a person who’s on TikTok, even if you aren’t.