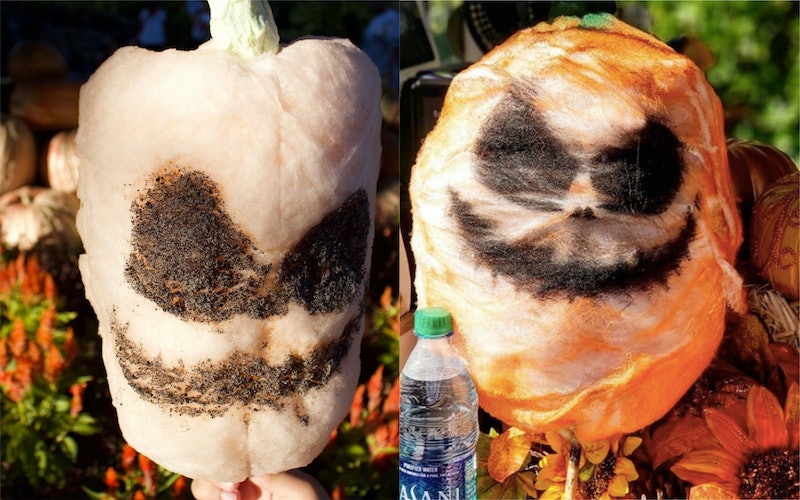 It is a longstanding fact that Disney is particularly on point at decorating its massive theme parks to make them festive for any given season. Unsurprisingly, Halloween is truly something special at Disney. Though typically the holiday's festivities are limited to one night, the entire season of October is ghoulish, and filled with tricks and, moreso, treats. Case in point: the Jack Skellington Cotton Candy many Disney heads have spotted at parks this month, and shared on Instagram so the rest of us can get in on the spooky fun.

According to Instagrammer @foodatdisneyland, the spooky sweet treat is available at Cotton Candy Creations in Downtown Disney, and sells for $8. For that, you get a truly massive hunk of orange cotton candy art on a stick. The 'grammer also noted that cookie dust was used to create Jack Skellington's face. Bustle reached out to Disney Parks, and a representative confirmed that the Jack Skellington Cotton Candy is, in fact, available at Cotton Candy Creations, and comes in a vanilla flavor, both in the white and orange versions.

And below is the vanilla option, of equal spooky adorableness.

Never one to miss a detail, Disney also makes sure this treat is modeled after a pumpkin by adding a small green stem at the top. Instagrammer KTtheDisneyBear also captured the treat is all its glory in the photo below, indicating that the face also can be ordered with black sprinkles for an alternative effect.

Disney is obviously looking to wow visitors by way of their tastebuds. Another unconventional sweet treat you can snag at Disney this autumn is pumpkin churros. Disney's California Adventure Park has released pumpkin spice churros, just in time to claim the title as the greatest unconventional autumnal treat to date. The Cozy Cone Motel at Disneyland in California, as well as the food stands near The Haunted Mansion Ride, are offering a festive Pumpkin Spice Churro with accompanying cream cheese dipping sauce. Imagine taking all your favorite aspects of a pumpkin muffin and deep frying them until they are crispy on the outside and chewy inside. Their elongated shape makes them ideal for dipping in cream cheese frosting.

But churros and cotton candy is just the tip on the metaphorical iceburg that is Disney's Halloween menu. The Jolly Holiday Bakery Café, in particular, offers a wide array of Halloween treats. According to the Disney Parks Blog, some of the bakery highlights include a Sweet Potato Hand Pie, a Cruella de Vil Brownie, and a Graveyard Cupcake. The pie is covered in an orange white chocolate glaze and topped with toasted mini-marshmallows. The brownie includes black dark chocolate mousse, white chocolate mousse, and a Cruella de Vil logo. The Graveyard Cupcake is a chocolate cupcake with cherry filling, dark chocolate mousse, Halloween sprinkles, and a chocolate tombstone — when you bite into it the cherry filling will look like blood. Not to mention, there's a roll shaped like vampire Mickey. It's cute as heck.

Disney seems to have this whole Halloween thing figured out better than the rest of us. Be sure to take advantage of all the season has to offer before holiday festivities arrive — it is happening sooner than you think.

More like this
TikTok's Favorite Bartender Thinks Mimosas & Bloody Marys Are Out For Brunch
By Alexis Morillo
Are We Drinking Rosé All Wrong?
By Sheila Yasmin Marikar
Here’s What Sarah Jessica Parker’s Canned Cosmo *Actually* Tastes Like
By Emma Garza
Meet The Spice Company Founder Who Sees Chai As A Metaphor
By Madhuri Sathish-Van Atta
Get Even More From Bustle — Sign Up For The Newsletter