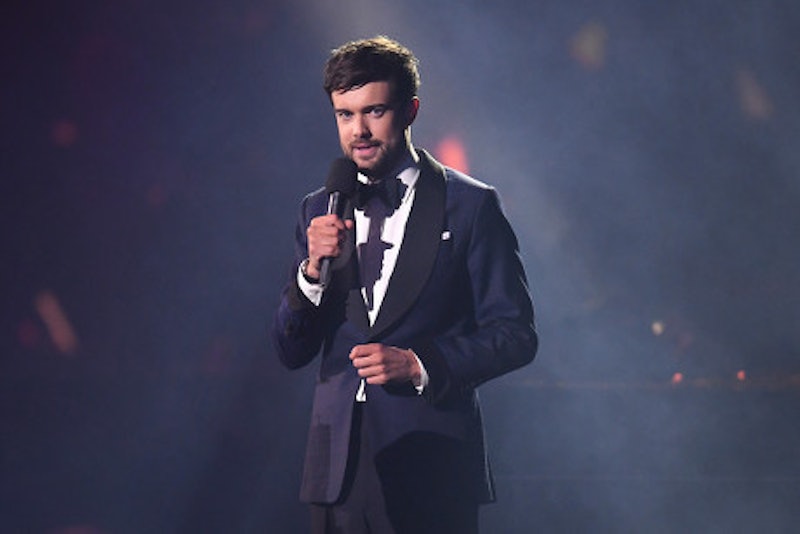 When a comedian hosts an award ceremony, it's best to expect the unexpected. Thankfully controversy is part of Jack Whitehall's repertoire, and he sure knows how to take the recent failure of a certain festival and turn it into something spectacular. I mean, who knew Jack Whitehall roasting Fyre Festival at the BRITs would become such a major highlight so early on in the ceremony?

I'll be the first to admit that I thought that first island shot was going to majestically turn into a Love Island-style intro, only to be pleasantly surprised by Whitehall donning a pair of speedos followed by a slew of jabs aimed at the doomed festival. There were references to the most well-known mishaps that occurred during the festival that yes, did include the infamous "cheese sandwiches" that were on offer.

Aptly changing the name to Bryt instead of Fyre (get it), this was opening was totally unexpected and so well put together. The juxtaposition between the text and the imagery were totally on point from the get go, and Twitter couldn't get enough of the shade:

There's a video of the full moment here:

And the joke didn't stop there, oh no. Welcoming viewers back after an ad break, Whitehall could be seen backstage in front of a replica of one of the tents on offer at the festival surrounded by trash, complete with a bucket as a toilet and complementary mouthwash that were also adorned cardboard signs.

If you have absolutely no idea what any of this means or what I'm on about, basically Fyre Festival was a music event in 2017 that was going to be like the Glasto of the Bahamas for the rich and famous, but turned out to be the complete opposite of that. Yep, it basically turned out to be a massive scam with broken promises, that ended up with the organiser Billy McFarland being jailed for six years after being convicted of fraud, as BBC reports.

While the festival hasn't really been forgotten since it happened, the recent release of two films on Netflix and Hulu — Fyre and Fyre Fraud, respectively — that documented the drastic collapse of the festival and the failures that came along with it has only fuelled the fire even more as to how bad this entire situation became. While it's still pretty fresh in the world's collective conscious, it is surprising to see an award show like the BRITs shade the festival on such a major level.

And even though there hasn't been another Fyre joke courtesy of Whitehall for quite some time, I'm totally betting that there will be at least one more before the night is over. I need to see more shade. But even if there isn't, the comedian has been cracking me up consistently ever since he graciously appeared during Hugh Jackman's opening number. I can't be the only one who was hoping for a little more song and dance on Whitehall's part though, can I? He did handle that baton really well, though. So proud.