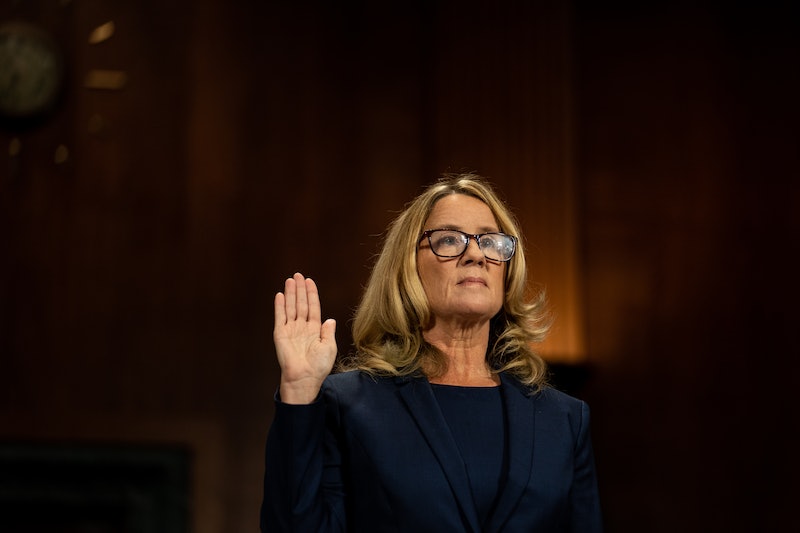 Several months ago, a woman alleged, in detail, that she had been sexually assaulted by a young man who would eventually be nominated to the Supreme Court. For this, Rep. Jackie Speier nominated Christine Blasey Ford for a Profile in Courage Award, a national accolade typically awarded to public officials.

I am nominating Dr. Christine Blasey Ford for this year’s Profiles in Courage Award because there is no one more deserving of this honor and distinction. She is the face of women speaking truth to power in the fight for equality. She is the face of every sexual assault survivor who has had to defend herself or himself when it is the perpetrator who should be on trial. She spoke for so many who have been robbed of justice. She is a hero of the highest caliber.

And she did all of this knowing she was guaranteed to suffer ceaseless character assassination attempts, torment, and abuse. Since coming forward, she has faced death threats and was forced to flee her home with her family for their safety while having to cope with the trauma of reliving that life-altering physical and emotional violation.

She testified under oath, broadcast for the world to see, and asserted repeatedly that she was 100 percent certain that then Supreme Court nominee Brett Kavanaugh sexually assaulted her when they were both in high school. Her detailed recollection of Kavanaugh pushing her into a bedroom, holding her down, and putting his hand over her mouth before she was able to break free gives me chills to this day. Even President Trump recognized her testimony was “very compelling” and said she was a “very credible witness.”

Dr. Blasey Ford’s conviction in fulfilling her civic duty and doing what was right makes her a courageous role model for all Americans.

Earlier: "Nominating Dr. Christine Blasey Ford — a true American (s)hero who sacrificed so much to do what was right for our country and for the pursuit of truth of justice — for this year’s Profiles in Courage Award @JFKLibrary," Speier tweeted late Monday night. "She is an inspiration to us all."

The Profile in Courage Award was established in 1989, and according to John F. Kennedy Presidential Library and Museum website, 51 awards have been given out since then. Some recipients include President Barack Obama, Gabrielle Giffords, Edward M. Kennedy, and John Lewis.

The award, per the website, is generally given to those who do or have hold public office. But the criteria indicates that "emphasis will be placed on contemporary acts of political courage."

Late last summer, Ford came forward with allegations that Brett Kavanaugh — now a Supreme Court justice — sexually assaulted her when they were teenagers. Kavanaugh has consistently and repeatedly denied these allegations, saying in one statement: "This is a completely false allegation. I have never done anything like what the accuser describes — to her or to anyone."

Ford was not the only woman to accuse Kavanaugh of sexual misconduct during his confirmation proceedings — allegations he consistently denied — but she was the only person whose accusations led to a public congressional hearing. Ford first shared her accusations with The Washington Post.

Several weeks later, in back-to-back testimonies, Ford offered excruciating details about the alleged assault, and Kavanaugh vehemently denied it ever happened. After an embittered public debate among lawmakers and nonprofits representing both Republicans and Democrats, Kavanaugh was ultimately confirmed to his position on the Supreme Court.

In the months afterward, the public received intermittent notifications about Ford's well-being. In the lead-up to the testimony, as well as afterward, she reportedly received death threats so severe that she and her entire family were forced to move into hiding.

In a Nov. 21 update to a now-closed GoFundMe started to help Ford cover the cost of newly-needed security measures, she said that "coming forward was terrifying, and caused disruption to our lives" but that she was "grateful to have had the opportunity to fulfill my civic duty." In an earlier update dated Oct. 3, she said that she "believed and still believe that it was my civic duty to come forward, but this is by far the hardest thing I’ve ever had to do, much harder even than I thought it would be."

The country has still been struggling to make sense of the way that Kavanaugh's confirmation proceedings played out, and what Ford's testimony might mean for future nomination processes. But if Rep. Speier's nomination is any indication, she believes Ford deserves some positive — and affirmative — public recognition.