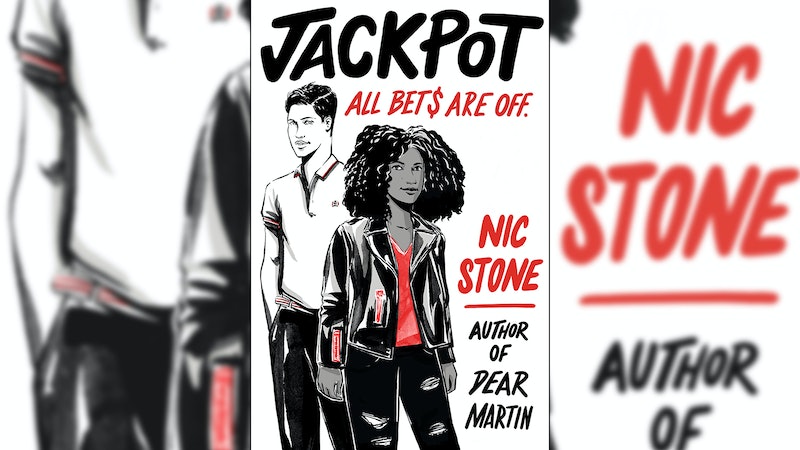 The New York Times bestselling author of Dear Martin and Odd One Out is back with a young adult novel about class, privilege, and luck. In Jackpot by Nic Stone, one teenager stumbles upon the opportunity of a lifetime — if only she can track down someone she doesn't know. The book isn't out until Oct. 15, 2019, but Bustle has an exclusive excerpt below.

Rico is a high school senior who would rather not have to work as the Gas 'n Go every single afternoon — then race home every night to take care of her younger brother. None of her rich classmates have to do it, but Rico and her family aren't rich. When Rico sells a jackpot-winning lotto ticket, she sees it as an opportunity to finally change her life — especially because the person who bought the ticket hasn't claimed the prize. With the help of one of her uber-privileged classmates, Zan, she embarks on a mission to track down the person with the ticket to a lifetime of wealth. But what happens when Rico's fight for better collides with the fact that Zan already has it all? "When you live as tenuously as my family does," Rico says in the excerpt below, "there’s nothing worse than having even the slightest glimmer of hope dashed against the ugly boulders of life."

I look at it and bite down on my lower lip. God, how amazing would it be to win even part of two hundred and twelve million dollars? The old Bad Boy rappers say, “Mo money, mo problems,” but they all had plenty of it. Me? I work at a gas station for $7.75 an hour, and most of that goes toward whatever bill Mama hasn’t made enough to cover each month (you know, minus the dollars she spends on weekly lotto tickets).

“Go on now. Pick it up,” the lady is saying. “Obviously someone over eighteen will have to claim the prize if you win anything, but perhaps one of us will get lucky.” She winks. Very different feeling than when Mr. Fifty-Dollar-Bill did it.

Makes my skin tingle a little.

I take the ticket and quickly stick it in my back pocket.

Which is good because Mr. Zoughbi chooses that moment to exit his office. Not sure he’d be real keen on a customer buying his underage cashier a lottery ticket. The lady and I exchange a look. She gets it.

“Well, you’ve certainly brightened up my Christmas Eve,” she says loud enough for Mr. Z to hear. “You finish your shift and hurry home now, you hear?”

I swear that ticket has turned radioactive and my right butt cheek is expanding in size right now.

When she gets to the door, it swings wide, and I hear her say, “Why, thank you, young man. My, aren’t you handsome!”

I look up, and there holding it open for her, with his million- dollar smile, is Alexander Macklin (“Zan” to his friends/ groupies/loyal horde)— varsity quarterback, all-a round teen dream, and heir to the booty- paper throne.

I swear that ticket has turned radioactive and my right butt cheek is expanding in size right now.

No, for real. His great-great-grandfather or something supposedly patented toilet paper on a roll, and now his family runs Macklin Enterprises, which is legitimately famous for its focus on ass-wipery.

Speaking of ass-wipery, rumor has it he only goes to our school because he got kicked out of his fancy private one.

Something about a hacking scandal.

I’m pretty sure he doesn’t have a clue who I am despite the fact that I sit two desks behind him in US History. But still. Would rather the richest boy in school not see me working the cash register at the local gas station. Pretty sure my hair’s a frizzy mess and there’s a cheese stain on my apron from a hot dog I snarfed earlier.

“Uhh, I need to go to the ladies’ room,” I say as Mr. Z approaches the counter to restock candy bars.

He looks up at me with an eyebrow raised.

I glance at the door again. The lady is gone, and Zan is stepping inside now. I think our eyes meet, but I turn away too fast to know for sure.

I slip from behind the counter. Zan has turned down the chip aisle, so I do my best to make no noise. Avoid drawing attention.

Just as I get to the back, Mr. Z hollers, “Oh, Ms. Danger!” He mispronounces my last name. Doesn’t rhyme with “stranger” like everyone assumes. It’s actually DON- gur and I usually correct people . . . having Danger as a last name would be cool if it weren’t such a misnomer.

So much for a clean getaway.

The walk home is trash.

It’s colder than I thought, and I can’t stop thinking about that dumb boy invading my outside-school bubble. In a year and a half of working at the Gas ’n’ Go, none of the rich kids from school have ever come in there. They all fill up their fancy cars at the BP near their gated communities a few miles away.

Now, with every numb-toed step I take, I wonder if Zan is still out and about. If he’s going to drive by, see me walking the mean streets of Norcross in the dead of a chilly night with no hat or gloves, and assume I’m a hobo.

In a year and a half of working at the Gas ’n’ Go, none of the rich kids from school have ever come in there.

I relax the tiniest bit once I reach the street my apartment complex is on, but my head is still messed up from the almost-encounter. Mama’s door is closed by the time I make it home, but Jax is stretched out on the couch in our small living room, trying his damnedest to keep his eyes open while Elf plays on the television screen.

I look around at the off-white walls and sparse secondhand furniture in our two-bedroom place. Jax was two when we moved in, and he and I have shared a room ever since.

I wonder what Zan Macklin’s room — what his house — must be like. Especially tonight. To the right of our couch, there’s a sorry excuse for a prelit Christmas tree with two measly newspaper-wrapped gift boxes underneath. An image pops into my head of a massive pine, taller than double my five-feet-six-inch height, and draped with twinkling lights and crystal ornaments and jammed with so many wrapped boxes underneath, it looks like it’s shedding gifts instead of pine needles. . . .

And Zan Macklin standing over it all trying to decide what to open first.

After slipping off my boots, I go over to Jax. He sits up so I can sit down, and then he lays his head in my lap. “Merry Christmas, kiddo,” I say as I run my hand through his mess of khaki-colored curls.

He sighs, and his sadness drops down onto my shoulder so heavily, tears immediately spring to my eyes. While it’s true he has no idea I squirreled away money from my paychecks over the last six months so I could buy him the bike he wanted, knowing he’s sad because of how little we have really rips me a new one.

I know we’re filthy rich compared to people in places with genuine poverty, as Mama likes to put it, but Jax is only nine years old. All he knows is that the other kids at his school already have lots of toys and video games and money, yet they still get lots of presents. Mama works upwards of seventy hours a week just so we can live in this bougie- ass area and “go to good schools,” but being poor in comparison with everyone around you sucks. Especially when you’re just a kid. We won’t even talk about the fact that he’s brown where most of the (rich) kids around him are white.

He sighs, and his sadness drops down onto my shoulder so heavily, tears immediately spring to my eyes.

The ticket in my pocket appears in my mind’s eye. The things I could do with that kind of cash . . .

“You should go to bed, baby boy,” I say, trying to force some kind of cheer into my voice. “Santa should be here pretty soon. No telling what he’s gonna leave you.”

“There is no Santa,” he huffs.

I die a little inside. “What do you mean there’s no Santa?”

He turns his head to look up at me. “Isn’t it obvious, Rico? If there is a Santa, he certainly doesn’t give a rat’s butt about kids like me.”

“First of all, where’s your Christmas spirit, mister? And second, what the heck do you know about the word obvious?”

His chin starts to quiver, so now I have to hold it together. Dear God.

“I’m always good, Rico,” he says. “But he never leaves me more than one thing. So either he’s not real, or he doesn’t really care about me.”

I can’t handle this right now.

“Well, I know for a fact that he’s bringing a big surprise for you this year.”

His eyes light up. Hope. Which is almost harder to take than the despair. “You do?”

Jax’s eyebrows tug together. “Are you sure?”

We head into the bedroom, and I pull back the Ninja Turtle comforter I found at a thrift store and gave him for his most recent birthday. He climbs in. “Will you sing ‘Smooth Criminal’?” he asks.

I grin. Our obsession with the Michael Jackson song has its origin in our stint at a shelter during Jaxy’s first couple years of life: there was a family with a toddler who often struggled to fall asleep, and the only thing that would help was the sound of her mom’s voice whisper-s inging Baby, are you okay? the way MJ does in the song. I started doing the same to Jax, who was a very fussy baby.

Good to know that even in his sadness, our bedtime traditions still reign supreme. Come to think of it, I’m glad he waited up for me.

He curls into a ball on his side, and I pull the comforter up over his shoulder as I begin to sing, but he’s out before I get through the first chorus.

Which is good because now I’m crying.

It’s like no matter how hard Mama and me work or how much we do, it always feels like we’re drowning. And now I’ve got images of the richest kid in school superimposing memories of our shelter days and smashing up against the helplessness and desperation constantly simmering beneath the surface of my chill. It’s bub- bub- bubbling up, pouring out, and stinging my windburned face from walking home in the cold.

I get up and go to the bathroom for a tissue. Feel the weight of the little slip of numbered paper in my pocket.

It’s like no matter how hard Mama and me work or how much we do, it always feels like we’re drowning.

I’ve yet to look at it because . . . well, I hate to admit it considering how low I try to keep my expectations, but the encounter with the cute granny planted quite the “what if?” in the rocky soil of my heart. Which ain’t good: when you live as tenuously as my family does, there’s nothing worse than having even the slightest glimmer of hope dashed against the ugly boulders of life. But after checking my watch, I head to the living room, pulling the ticket out as I go.

Truth be told, I’m nervous about seeing which of the two I got— it’ll be a little freaky if I chose the one with my birth date on it. I drop down onto the sofa as the movie credits finish rolling, and when cheesy saxophone music comes pouring out of the TV speakers, my breath catches.