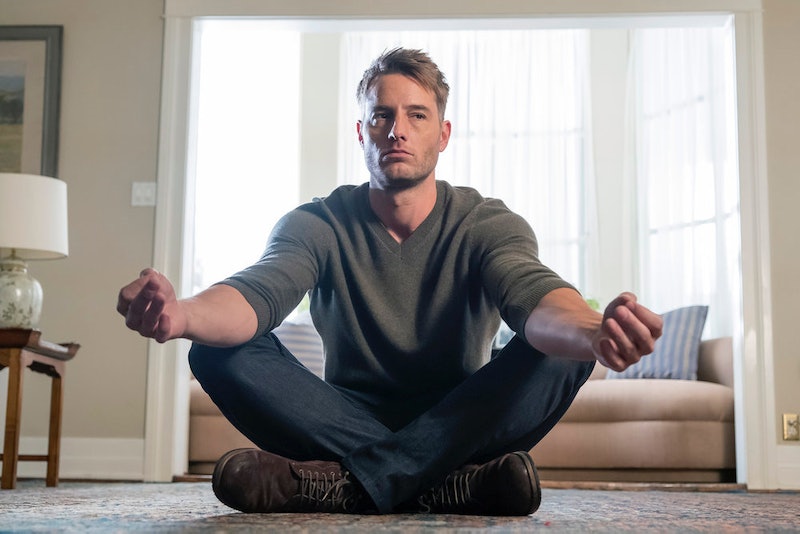 Season 2 of This Is Us may have shed some light on Jack Pearson's tragic death, but there's still so much about this character that fans (and his family) have yet to uncover. All of that is about to change, though. At the end of Season 2, Kevin was seen hopping on a plane to Vietnam in the hopes of learning more about his dad's time in the war, and according to Justin Hartley, Jack's Vietnam backstory on This Is Us will lead to some very shocking revelations that no one will see coming.

“He’s going there — it’s a healing thing for him — so he’s going to get a lot of information, some stuff that he didn’t know and didn’t expect,” Hartley told Entertainment Weekly of Kevin's Season 3 journey during a recent interview. “And it’s going to jar a few things.” This apparently will lead to some “super heartbreaking ” and “shocking" discoveries about Jack's past that'll make fans question everything they thought they knew about the character.

“It’s not what anyone is expecting,” Hartley explained. “No one is going to see it coming. It’s ambitious stuff." Granted, that feels just par for the course on a show like This Is Us, which is known for its epic plot twists; however, Hartley continues to be impressed by how all of the pieces of these stories end up falling together, stating:

"Here’s the cool thing about it: At the end of Season 3 when you go back and watch the beginning of the series, you’re going to [be] like, ‘Wow, it all works,’ but you never would see any of this coming. I don’t know what those writers are eating, but it’s brain food. They’re brilliant.”

As for what those shocking revelations could be, though, Hartley remains tight-lipped on the matter. But vague details like this is where fan theories tend to thrive. One possibility is that Kevin will come face-to-face with Jack's brother, Nicky, who could very well still be overseas in Vietnam. Up until now, Jack has made it seem like Nicky is dead and no longer part of his life — which could explain why his family doesn't seem to know about his sibling. But on this series, nothing is as it seems, so considering we've never been given a direct confirmation that Nicky is dead, it's totally possible for him to pop up in Season 3.

This isn't the first time Hartley has hinted about a possible Nicky sighting, though. During a previous interview with People, he suggested that Kevin could end up running into someone important over in Vietnam who could help provide some insight into who Jack really was.

"I think it's more of trying to find out what, exactly, his father did over there, besides the obvious, and who he might have met, who might still be around. Are there people available that he could talk to that sort of fill in some clues as to who Jack was? It's kind of a self-exploration through that vehicle, I guess, a little bit."

Could this person "who might still be around" be a subtle reference to Jack's mysterious little bro? Viewers will have to wait until Season 3 returns this fall to find out for sure, but it definitely seems like there's a lot more to Jack's story that still needs to be uncovered.