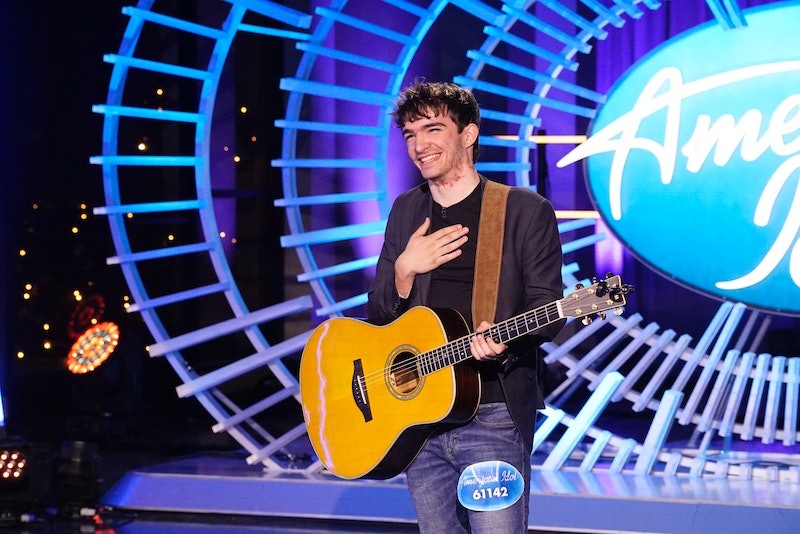 In his short 19 years of life, Jackson Gillies from American Idol has endured and accomplished more than many people twice his age. According to his official website, he was diagnosed with Type 1 Diabetes at just three years old. He played every sport he could get his hands on throughout his childhood, and then, at 13, had an abscess removed from his head that doctor's couldn't explain. While he was bedridden by this unknown condition, he learned to play the guitar.

Gillies explained his entire journey and very complex health history in a Santa Barbara Ted Talk he conducted at the age of 17. (Yep, add that to his list of pre-Idol accomplishments.) After undergoing surgery to remove the abscess from his head (which he named Bob) and many other consultations from endocrinologists and dermatologists, Gillies was diagnosed with Hidradenitis Suppurativa — also known as HS. According to Gillies, HS is a "painful, chronic, inflammatory skin disease" manifested in recurring nodules and abscesses everywhere on the body, often on the groin and underarms.

Since his diagnosis, Gillies has thrown himself into campaigning for awareness around HS because it's a condition that's often pushed under the rug. In his Ted Talk, he said one doctor told him HS wasn't heavily researched because it's not "a sexy disease" with big money behind it, yet an estimated four percent of the population has it. In the face of that, Gillies is combating the stigma by talking about it and encouraging others to do the same.

According to his website, Gillies organized and produced a project for his senior thesis that combined his passions for music and HS awareness by putting on an HS awareness concert in collaboration with other local artists. He's also appeared in TV ads for diabetes alongside celebrities like Mary Tyler Moore and Nick Jonas, and has received multiple awards throughout his life, including Teen Star USA 2016, the 2017 Profant Foundation Award for music, and the 2019 TVSB Global Citizen Award. In 2018, he organized Teens Sing for Santa Barbara, a benefit concert dedicated to victims of the Thomas fire and mudslide that affected Southern California in December 2017.

In February, Gillies released his debut single "Miss Me Too," just a few weeks before his American Idol audition aired. In his Ted Talk, Gillies told the audience that even as an inconsolable colic baby, he was soothed by Luciano Pavarotti's opera music. "For as long as I can remember, music has been a soothing force in my life," he said. Now, he's trying to pass that feeling on.

Gillies has already accomplished a lot, and appearing on Idol is sure to expand his platform. Not to mention that his musical talents as a singer, songwriter, and musician are going to be difficult for his competitors to match, so he has a good chance of making it to the top. And if he wins Idol before turning 20, he would have to get really creative to top that.