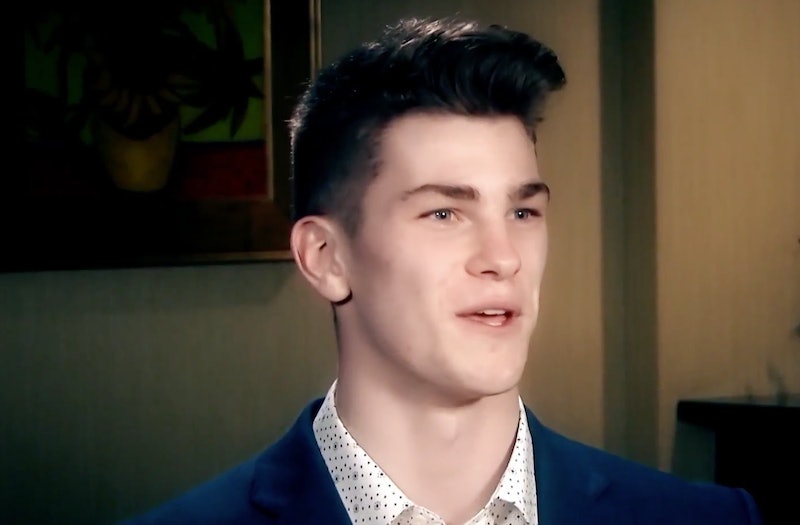 Dozens of female gymnasts over the past several months have gone public with heartbreaking accounts of sexual assault at the hands of former USA Gymnastics team doctor Larry Nassar. But on Tuesday, the first male gymnast accused Nassar of sexual abuse, saying his sister motivated him to speak out.

"I hope he rots in hell," Jacob Moore said on Today. Moore, 18, said that he was inspired to speak out by his sister Kamerin Moore, another survivor of Nassar's abuse. Kamerin gave a victim-impact statement at Nassar's sentencing, along with numerous other gymnasts over several days of testimony, and she mentioned her brother and his abuse in her statement.

"I wasn't a dumb kid," Moore said on Today. "I knew what medical practices were, and that one was out of the ordinary."

Moore alleged that as part of a treatment for a shoulder injury, Nassar used acupuncture needles on his pubic area and then asked a female gymnast who was also in the room — which was in the basement of Nassar's home — whether she had ever seen a male body part before.

"Coming out of the treatment, I felt very uncomfortable," Moore said. Bustle has reached out to Nassar's lawyer for comment.

Nassar was sentenced to 40 to 175 years in prison, guaranteeing that he will spend the rest of his life behind bars. He pleaded guilty to seven counts of criminal sexual conduct and admitted that he had exploited his position as a doctor to sexually assault people who came to him for medical treatment.

"There are no words that can describe the depth and breadth of how sorry I am for what has occurred," Nassar said after describing how the days of survivor testimony had deeply shaken him. "An acceptable apology to all of you is impossible to write and convey. I will carry your words with me for the rest of my days."

"I was inspired by my sister and everyone else in this community to come out and help bring change to what allowed this to happen," Moore said in a press conference on Monday. "I don't want [other victims] to be scared to come out because of stigma that guys can't be sexually abused or taken advantage of."

“Me and my sister shouldn’t be able to relate over the fact that we’ve both been abused,” Moore also said to NBC News.

According to CNN, the section of the suit regarding the abuse that Moore suffered says, "There is no known medical connection between shoulder pain which can be treated through acupuncture in the area of a male's genitalia" and that "Plaintiff Jacob Moore believes the conduct of Dr. Nassar was sexual assault, battery, abuse, molestation and harassment performed by Defendant Nassar for Defendant Nassar's sexual pleasure and gratification."

Moore also gave an interview along with two other survivors of sexual abuse on NBC News’ Megyn Kelly TODAY, in which he said that while he felt "uncomfortable" during his experience with Nassar, "you never really know that something is blatantly wrong."

Despite what he told NBC News was a "sickening" experience, Moore is still a competitive gymnast on the team at the University of Michigan. Just across the state, Michigan State University is dealing with lawsuits filed by numerous defendants after Nassar spent decades working there. USA Gymnastics is also a subject of federal lawsuits concerning their treatment of both Nassar and his alleged victims. Moore's allegation is a serious one, and the fallout from this case is likely to continue for years to come.