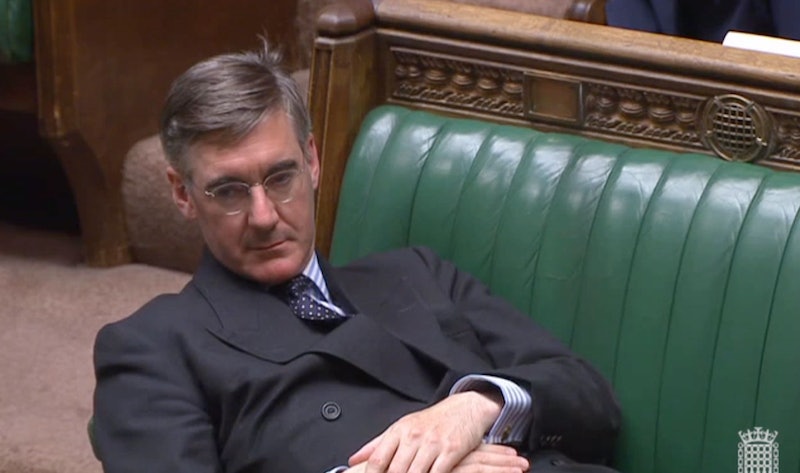 From the Prime Minister losing his parliamentary majority to the looming threat of a snap election, the drama in Westminster over the last week has been intense. Emergency Brexit debates have been going on in the House of Commons as a bill designed to stop a No Deal Brexit goes to the House of Lords. However, it isn’t just the Brexit negotiations that have been hitting the headlines. Jacob Rees-Mogg lay down in the House of Commons and people aren’t happy about it. A picture of the well-recognised politician, who is currently Leader of the House of Commons, has gone viral.

Jacob Rees-Mogg has become known for his, for want of a better word, unique ways of dress, speech, and behaviour. However, when pictures emerged of him lying on the green leather frontbench in the House of Commons with his eyes closed as MPs debated legislation that would prevent a No Deal Brexit, his colleagues and Twitter were less than impressed. It’s got to be said Rees-Mogg looks more like he’s having a lazy morning on the sofa watching Saturday Kitchen than debating one of the biggest issues dominating UK politics right now.

Actor Hugh Laurie took to Twitter and wrote, “Jacob Rees-Mogg lolling horizontally on the front bench during tonight’s emergency debate is as insolent and insufferable as anything I’ve seen.”

Another Twitter user wrote, “You respect nothing and you certainly do not represent the people of Britain.”

Rees-Mogg’s fellow MPs and members of Parliament also weren’t best pleased with how seemingly relaxed he was in the debate. Labour MP Karl Turner tweeted the image of Rees-Mogg slumped down on the bench and said, “As a working class bloke brought up on a council estate in Hull I always feel enormous pride and gratitude when I go into the chamber of the House of Commons to represent east Hull. I've never felt a sense of entitlement. This is what that looks like!?”

Caroline Lucas, MP for the Green Party wrote, “By literally lying down on the job, Rees Mogg indicates his contempt for parliament. But we will not let political insiders dressed up as rebels get away with their power-grab. We need a Citizens Convention to put people at the heart of politics.”

And Anna Turley, MP for Redcar, wrote, “The physical embodiment of arrogance, entitlement, disrespect and contempt for our parliament.”

While his apparent breather during the debate went down pretty poorly with a lot of people online, some Twitter users also saw an opportunity to have a bit of a laugh. One user wrote “Parliament approves Jacob Rees-Mogg’s request to replace parliamentary benches with chaises longues.”

The image was also projected onto Edinburgh Castle with “Lying Tory” written underneath.

And the memes kept on coming.

While the emergency Brexit debates continue in Parliament, there’s a battle for the best sleeping Rees-Mogg meme on twitter. It’s little surprise Rees-Mogg has hit the headlines during what could be the final weeks of Brexit debates. However, I’m not sure anyone could have anticipated it would be for having a snooze on the job.