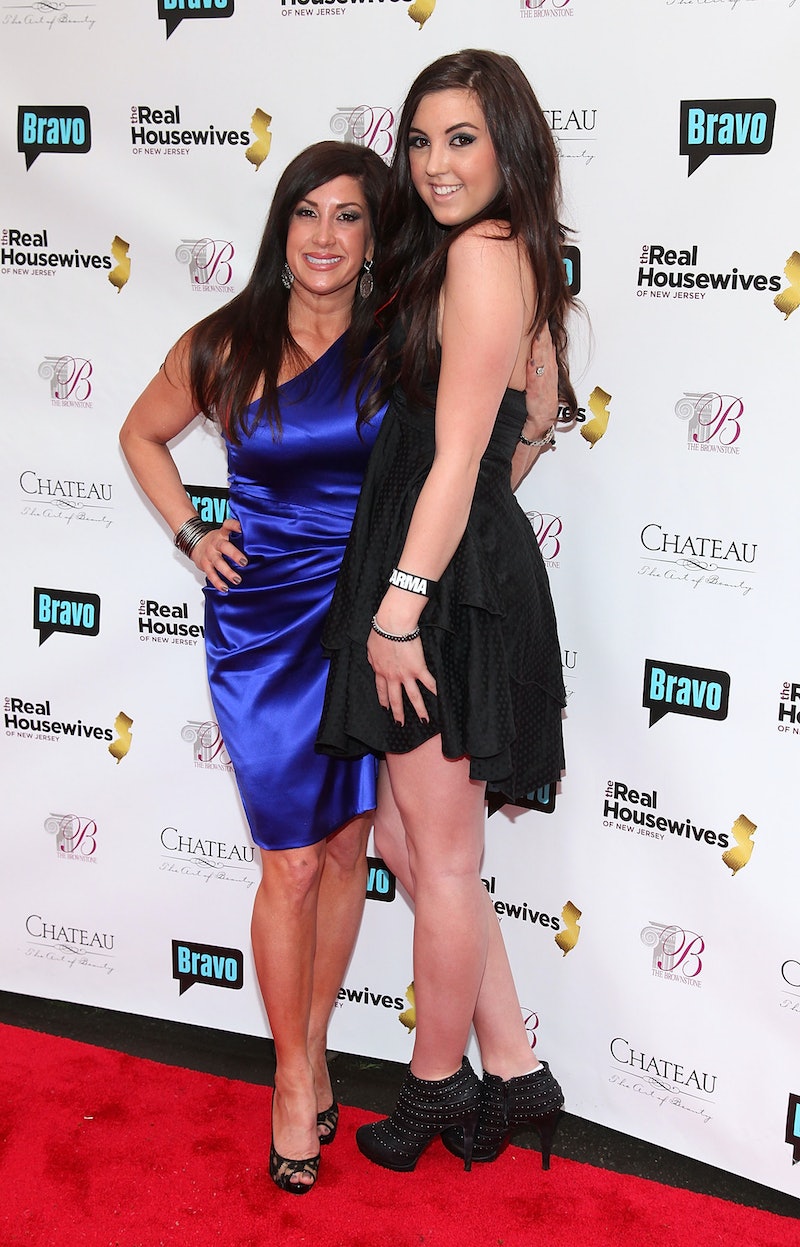 Congratulations are in order for Jacqueline Laurita's daughter. Real Housewives of New Jersey's Ashlee Holmes got married to Peter Malleo on Aug. 8. The newlyweds announced the exciting news on Instagram, alongside an adorable wedding photo that also shows how blissful they are to be wife and husband.

"It’s official... Mr. & Mrs.," Ashlee captioned the photo. Peter also shared the same image and wrote next to it, "As Borat would say, 'My Wife.'"

As you can see below, Peter is dressed in a navy suit, whereas Ashlee is wearing a beautiful short white dress. It doesn't look like they had a huge, lavish wedding filled with guests, presents, and flowers. It seems like they kept their special day pretty simple without a tux and a princess wedding gown, and there's nothing wrong with that whatsoever. They both look head-over-heels in love and beyond happy with how their wedding went.

Yes, as fans can imagine, Jacqueline is overjoyed for her daughter and new son-in-law. Next to their wedding photo, the former RHONJ star gushed, "I couldn’t be more thrilled for them. May they have a beautiful life together! A.M./P.M. Congratulations! Love you both! #Family 8-8-2018."

Ashlee's family and former Bravo stars also sent the couple congratulations on Instagram. Caroline Manzo, who appeared on RHONJ for five seasons, wrote, "Wishing my niece @ashleenicholemua and nephew @c3peteo a lifetime of love, health, and happiness as they start their journey as newly married husband and wife! Congratulations! Love you both! Xoxo." Ashlee's cousin, Lauren Manzo, also congratulated her by posting on Instagram, "Congrats to my cousins @ashleenicholemua & @c3peteo On getting married today!"

Ashlee and Peter announced their engagement in February 2016. In a now-deleted Instagram photo of Ashlee, Peter, and her sparkly diamond ring, the 27-year-old wrote at the time, "I said 'yes' Thank you for such an amazing day @c3peteo...I'm so excited for this next chapter of our lives." Jacqueline also expressed her excitement for her daughter's engagement. She tweeted, "Say congratulations to my daughter @ashleeholmes & her fiancé @c3pete0 We are thrilled to announce their engagement!"

On Feb. 18, Ashlee shared a photo from their engagement on the two-year anniversary of Peter's proposal. "2 years ago today! Happy fiancéversary @c3peteo. We’ll get married eventually," she wrote. "**Fun fact: It was so cold out that afternoon that I was wearing a sweater over a leather jacket lol."

They are also proud parents to their almost 2-year-old son, Cameron Hendrix Malleo. In March 2016, Ashlee announced her pregnancy. She gave birth to Cameron on Aug. 30, 2016. If you scroll through both Ashlee and Peter's Instagrams, you can tell how in love they are with Cameron.

After Cameron's was born, Peter shared on Instagram, "Today was the best day of my life. Meet my son Cameron Hendrix." Ashlee tweeted, "23 hours of labor followed by 1 hour and a half of pushing… but it was worth it. My lil man is finally here." Yeah, they are one big happy family.

Ashlee and Peter seem to be living their best lives. Congratulations to them both on their marriage!