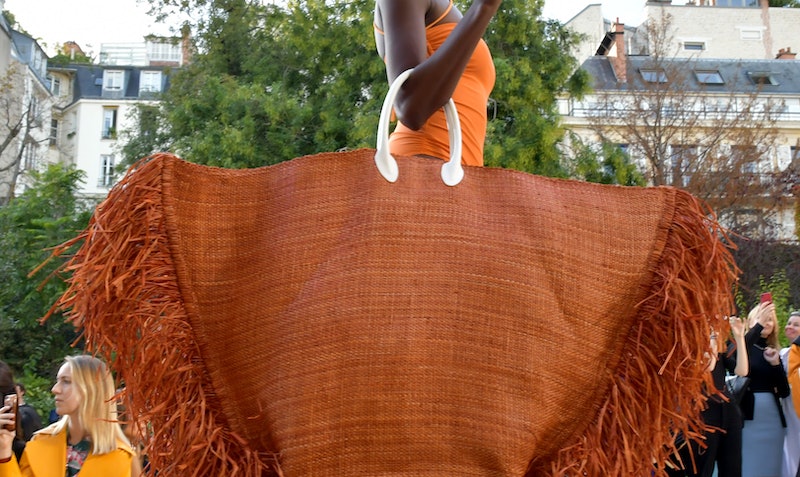 Accessories are becoming supersized in Milan Fashion Week, where bigger most definitely became better. The label Jacquemus made massive purses, introducing a new way to make a fashion statement. The designer behind the new trend, Simon Porte Jacquemus, isn't new to massive accessories, where he started to tinker with the proportions of fashion a few seasons back, creating huge straw hats that were the size of a kitchen table. If you wanted to hide from the sun on the beach, this hat would definitely do it — it was about the size of a beach umbrella. While it's a strong statement that not everyone would feel comfortable pulling off, the hats exploded and fashion it-girls wore them everywhere from the beaches of Ibiza to Sri Lankan getaways. It was definitely Instagram worthy.

Since the hats became such a raging success, Jacquemus figured that people might want to rock more macro accessories and whipped together a massive bag that Mary Poppins herself would envy.

Jacquemus is the epitome of resortwear, where he focuses on slinky dresses, sheer materials, and itty bitty short shorts that are perfect for the high-end jetsetter. Since the label centers itself around the adventurous woman that flies to different beaches around the world, it only makes sense that the designer would reinvent the straw bag in a fun, playful way. The models walked down the runway wearing gauzy summer dresses and sleek one piece swimsuits, with the raffia tote slung on their arm and nearly touching the floor.

"In straw and burnt orange incarnations and complete with fringing, the La Riviera bags could literally hold your entire summer wardrobe, your summer crush, your SPF and still have room for snacks," Vogue explained. If you think your chapstick and car keys get hopelessly lost in your normal-sized tote, just imagine where they would go in this bag. It would turn into a black hole — but a stylish one.

The inspiration behind the collection was the type of woman that wears the same itty-bitty clothes to the beach that she does to the clubs, her clothing aesthetic being flirty and beachy. "You don’t know if she’s going out or to the beach,” the designer told Vogue after the show.

Hilariously enough, Jacquemus was also the mastermind behind the micro bag trend from a couple of months back, taking a handbag and shrinking it outlandish proportions, to the point where a lipstick could barely fit into it. Would it be practical? Maybe not. But is it fun? Definitely. From top handle purses that look like doll accessories to pouches slung over the neck, they were just the thing to contrast with mega-sized straw hats, throwing off the proportions of the outfit in a tongue-in-cheek way.

Whether you want to wear toy-sized handbags or drag an XL tote after you all day long, Jacquemus has options for you. While it's a bold look, here's to hoping this trend takes off, giving us an excuse to carry around our whole lives in one massive bag.

More like this
Harry Styles’ Red Carpet Looks Have One Thing In Common
By El Hunt
15% Pledge Director LaToya Williams-Belfort On The Impact Of Supporting Black Business
By Dominique Norman
The Biggest Runway Trends From Milan Fashion Week 2022
By Allie Fasanella
Genius T.J.Maxx Shopping Hacks For Sales On (Almost) Everything
By Kelsey Stiegman
Get Even More From Bustle — Sign Up For The Newsletter