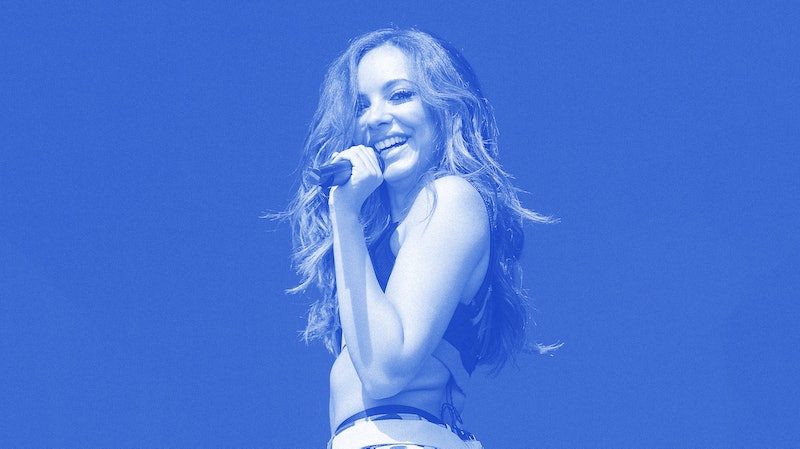 It’s eight years since Little Mix broke the curse of the girl groups to win the biggest prize on TV: The X Factor. Since then, the foursome has won two BRIT awards, scored a number one album, and seen four of their impeccably catchy singles hit the top spot. Ahead of the release of their new single, the effervescent summer banger "Bounce Back," Bustle UK chatted with Little Mix about the night that changed it all. Keep reading to see the advice Jade Thirlwall would give herself.

I know you’re feeling a shit load of panic right now, but try and take a breather. You’re probably not going to remember an inch of this night looking back, so first things first: enjoy it while you’re there.

Second, never let go of the confidence you have in yourself and the band. You might look like a hot mess right now, but it’ll come together eventually. Those outfits — and there will be some outfits — will give you a laugh 10 years down the line, and if there’s one thing that we’ve learned along the way, it’s that laughter has the ability to get you through it all.

Because there will be some moments when you feel like it’s all going wrong, when you think everyone around you has given up on the band, and the future is totally out of your control. It will be awful and it will be scary, but you’ll rally together and come up with something wild that might even get you a couple of BRIT Awards, too.

Make sure you always see the bigger picture though, and try your best to enjoy this experience for what it is. Other people's negativity will be one of the hardest things you come up against and it’s too easy to get sucked in by all the pressure. You have a squad of amazing women around you, so trust me when I say, Jade, man, you don’t need to worry so much — it’ll all come off in the end.

And remember, you’re at your most successful when the decisions come from you, so don’t be afraid to use your voice. Everyone in this industry is blagging it, and that includes the old blokes at the label that try to fob you off with their version of a hit. Your version will always get you way further, so don’t let them convince you otherwise. It might be nearly eight years before you find your feet properly, but you will get to a place where you really know what the tea is.

Growing into a woman in Little Mix isn’t going to be straightforward, and you’re going to wonder more than once what it would have been like to have just one year of freedom before making a career out of things. But, missing out on those drunken nights won’t seem like such a big deal in the long run, and you can be sure the friends you’ve made will last longer than any bar crawl the Toon could give you.