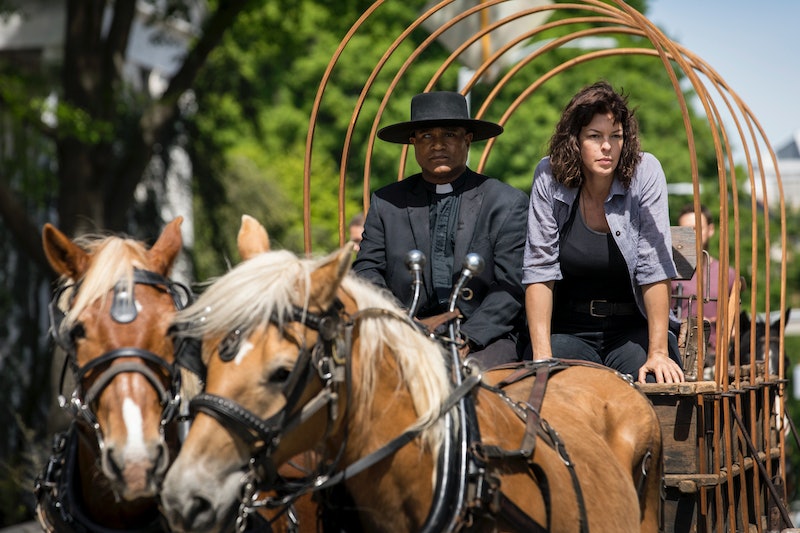 AMC’s flagship series The Walking Dead is in the full swing of Season 9 as Rick Grimes tries to bring the communities together to build for a better future. This season features a lot of romance with Jerry and Nabila’s sweet campsite kiss and a few wonderful Richonne moments. There’s also a quickly budding relationship with Carol and Ezekiel, which wasn’t surprising to fans given that the pair has been flirting since Season 7. But, the most unexpected pairing happened in Episode 2 when Anne (previously Jadis) and Father Gabriel consummated their relationship while gazing at the stars. Some fans might wonder about Jadis and Gabriel’s relationship in the comics compared to the television series, because it's sort of bizarre.

The show has definitely taken creative liberties with this couple because Jadis did not exist in the comics even though her group was present in a different capacity. According to Comicbook.com, The Scavengers were a small, hostile, and short-lived comic group who attacked Alexandria and caused several deaths like Morgan and Jessie. But, the group was run by Derek, a dangerous anarchist who is nothing like Jadis in terms of personality and leadership style.

And, although Father Gabriel was in the comics, he never had a romantic relationship during his run. The comic character died during the Whisperer war, which is expected to take place on the TV series in the near future. So, this Father Gabriel and Jadis duo may be short-lived if the series gives him the same comic book death.

In the TV series, Jadis was introduced back in Season 7 as the leader of The Scavengers, a large group who inexplicably spoke broken English and lived in a massive trash yard. Interestingly, the group came into the picture because they kidnapped Father Gabriel, which lured Rick into their community.

Jadis teamed up with the Alexandria group to defeat the Saviors, but her group double crossed him at the end of Season 7 because Negan offered her a better deal. Rick came to her once again to make a deal, but her choice quickly backfired when her entire group was murdered by Negan’s men. She decided to drop the broken English act and started using the name Anne at the end of Season 8. Jadis/Anne was convinced by Rick and Morgan to join the Alexandria group.

Prior to this season, there wasn’t much interaction between Father Gabriel and Jadis. When we saw her, she was usually speaking to other leaders like Rick, Michonne, Simon, and Negan. But, the pair apparently got close during the 18-month time jump after the war. They were seen riding in a wagon together and chatting each other up in the Season 9 premiere episode. She is now using her skills as an artist to create portraits of fallen group members like Glenn and Herschel, so Gabriel asked her to draw a picture of a mysterious woman.

She opened up to Gabriel about feeling like no one trust her, which makes sense because of her previously sketchy behavior. Gabriel relates to her because he was once the hated person among the group but has earned their trust over time. It's pretty obvious that Jadis/Anne is attracted to the priest, but he seems a bit unsure about this flirtation.

They meet up later that night and exchange awkward conversation about religion and the woman from the portrait, who turns out to be a member of his congregation. In case you forgot, Gabriel refused to let his church members into the building and allowed them to die due to his own fear. Things escalate to them having an intimate moment that shocked a ton of fans.

This relationship seems a bit left-field because there was no solid buildup to it like the aforementioned pairings. And, Jadis/Anne still doesn’t seem like a trustworthy person. She knows something about the elusive helicopter that keeps popping up, yet she won’t tell anyone what is going on. If the people in the helicopter can possibly help their communities, then why wouldn’t she at least open up to Father Gabriel if they are in a relationship now? Or, perhaps she snuggled up to Gabriel to use him in some way. It’s really hard to gauge her true intentions but this season will likely reveal her connection to the helicopter.

The Walking Dead usually doesn’t pair major characters together without some purpose, so it will be interesting to see what happens between Father Gabriel and the trash leader formerly known as Jadis. Watch it all go down every Sunday at 9 p.m. ET.

More like this
You’ll Most Definitely Recognise Kyle Pryor’s Soap Star Girlfriend
By Sophie McEvoy
Everything To Know About 'Monarch' Season 2
By Gretchen Smail
Is Blake Lively Or Penn Badgley The Richest 'Gossip Girl' Star From The OG Series?
By Hugh McIntyre
Theo James Revealed The Truth About His 'White Lotus' Nude Scene & Fans Can't Cope
By Stephanie Topacio Long
Get Even More From Bustle — Sign Up For The Newsletter