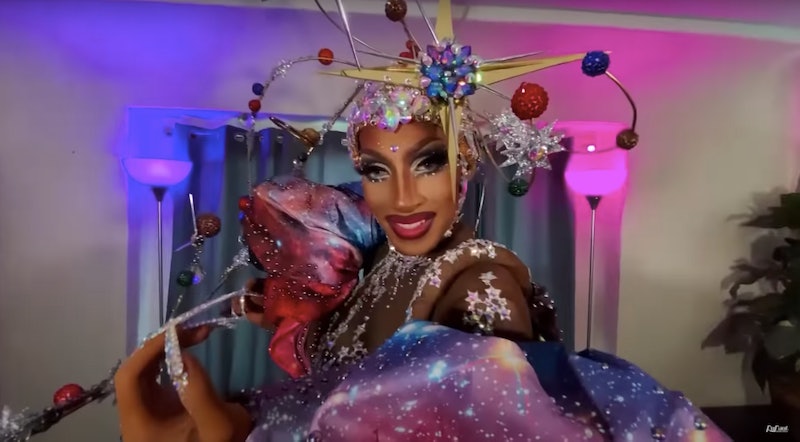 Ru and his "sequestered squirrel friends" — aka Michelle Visage, Carson Kressley, and Ross Matthews — divided the night into three different lip-sync challenges. The first was a "close-up" in which the queens lip-synced over FaceTime, getting up close and personal with their webcams and using only their expressions to perform to Ru's single "Bring Back My Girls." No death drops, no wig tosses — just lots of smizing.

Then they each creatively directed their own at-home lip-syncs to songs of their choosing, which turned out more like mini music videos. Crystal embodied her inner mother and baby bird to Nelly Furtado's "I'm Like a Bird," complete with a cloudy cloth backdrop. As expected, Gigi went into full production mode and performed A-ha's "Take on Me" on a set directly inspired by its '80s animated video. And Jaida took lip-syncing from home to a whole new level by tossing her hair around her tiny apartment's living room to Ciara's "Get Up."

Ru planned to eliminate one queen before the final lip-sync for the crown, but the top three were too impressive. So, he instead advanced the entire trio to the last challenge — a full lip-sync to Destiny's Child's "Survivor." They were all sent the same silvery backdrop and props, leaving the queens to be the only independent variables.

They all crushed it, but only one could win. It was clearly a tough choice for Ru, which only confirms that he selected the right queens to compete in Season 12.

Season 13 queens better start prepping now. After that finale, they have quite the tough act to follow.