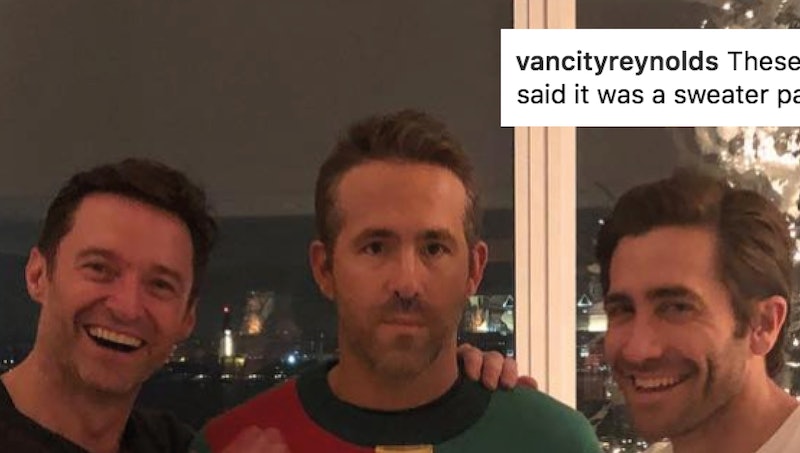 Actor Ryan Reynolds is well known for his sense of humour, and fans of the Deadpool star often enjoy this through his body of work, his social media, and various comedy sketches. However, this week Reynolds appeared to be the butt of the joke after being stitched up by some fellow Hollywood A-listers. Yep, it turns out Jake Gyllenhaal and Hugh Jackman pranked Ryan Reynolds in the most Christmassy way possible — and it was amazing.

In an Instagram post shared by the 42 year-old, the actor is shown standing between his Hollywood pals. However, Reynolds appears to be the only one sporting a very over the top Christmas sweater, the style of which resembles a giant Christmas gift, reports the Daily Mail. In the photo, The Greatest Showman and Donnie Darko stars look on in hysterical laughter after successfully pulling off this Christmas-themed prank, which involved them tricking Reynolds into believing he was actually attending a "sweater party." The accompanying caption of the actor's Instagram post reads: "These f***ing a**holes said it was a sweater party."

For those not familiar with the tradition, a Christmas sweater party usually requires all invited guests to attend wearing their most off-putting festive-themed sweater. In a second Instagram picture shared by the Green Lantern actor, his mood appears to have made no improvement, as Jackman and Gyllenhaal pose alongside him joyfully wearing their regular everyday attire.

Prior to this hilarious prank, Jackman shared his very own social media hi-jinks with his 22.3 million Instagram followers. In one of the Wolverine star's posts, the actor displayed a photo of Reynolds working behind the counter of Jackman's coffee shop, the Laughing Man Coffee Company, and he appeared to be in the midst of a heated exchange with wife, Blake Lively. In the funny post, the Gossip Girl actress is shown to be throwing her hands up in frustration towards husband Reynolds. The caption of Jackman's Instagram pic reads: "Our policy at #laughingmancoffee is to make customers happy - not drive them insane (exhibit A = @vancityreynolds). @blakelively your coffee is on the house... forever."

These humorous posts are part of the hilarious ongoing banter between Jackman and Reynolds, and after Jackman announced his upcoming The Greatest Showman tour, he also revealed that he politely turned down an offer from Reynolds — who had asked to take part in the live shows. According to the Metro, when asked by the Deadpool actor about a potential collaboration, Jackman said "Ryan’s like, 'I’ve been working on my dancing.' I’m like, 'Dude'."

When further discussing who he'd like to see join him on the 2019 Showman tour, the actor revealed "I’d love Pink to come with Willow and sing 'A Million Dreams,' I’d love Sting to come, I would love Janelle Monáe, I would love Audra McDonald to come, I would love Kelly Clarkson — there’s so many people that I would love to come." The tour, titled The Man. The Music. The Show, will see the Hollywood star perform songs from a variety of well-known musicals, and will take place in the UK in May 2019.

Speaking on The Today Show in the U.S., the 50-year-old said "I’ve done it in Australia, but now I’m going to go around the world. I’m going to cities all over America, we’re going to Europe, we’re going to the UK, we’re going back to Australia and New Zealand. I’m singing. I’m dancing. I’m telling stories." Let's just hope Reynolds doesn't seek comic revenge during any of his performances.