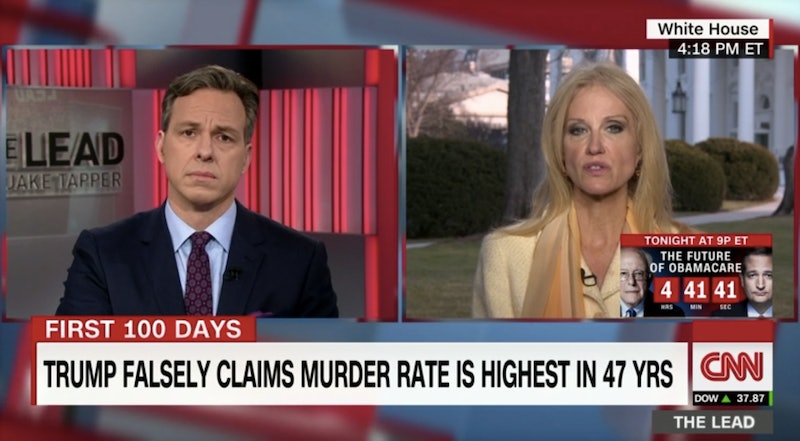 Countless journalists who've sparred with Donald Trump's campaign manager-turned-special advisor Kellyanne Conway are frequently stumped by her uncanny, amphibious ability to slide away from a pointed question. CNN's Jake Tapper isn't one of them. In an interview between Conway and Tapper on Tuesday (that some on the internet are calling "face-melting"), the anchor skillfully kept up with Conway, grilling her about the Trump administration's anti-media stance before eventually getting her to acknowledge a number of the "demonstrably not true" statements the president regularly makes.

Regardless of whether this interview sticks to Conway (I wouldn't hold my breath), we absolutely can hold on to the deep, maybe even spiritual connection so many viewers felt to his facial expression throughout the whole conversation. Caught somewhere between an existentially fraught grimace, a (significantly more exhausted) Jim Halpert fourth-wall break and that one scene in Poltergeist where the paranormal investigator peels his own face off, Tapper's expression is a Platonic ideal of "done." For an internet so tired of watching Conway charm her way out of corners Miss Teen South Carolina-style (which she totally tried to pull as she leaps from Tappers media-hatred question to an unrelated speech about working together to help veterans), it was like looking in the mirror.

The face is decidedly Good™ for the double-speak ravaged souls of 2017. It's cathartic to watch. Especially on a loop.

But even better? Everything the face represents.

Tapper's taking a stand for the fourth estate by refusing to fold to Conway's alternative answers or cave to her implicit offers (veiled through requesting that they find "common ground") that the press would gain more access and receive less vitriol from the President and his staff if they were less critical.

Ultimately, it's his composure and focus (the thing that most likely inspired the painfully-relatable blank expression) on getting a straight answer that matters.

As Slate's television critic Willa Paskin noted in a recent essay on Tapper's approach to news, the anchor can sometimes come off as a bit of a "jerk" in his broadcasts. But let's face it, that's not necessarily such a bad thing. Sure, with pained facial expressions and an aggressive line of questioning, he can come off sort of a jerk (I think he'd prefer "dogged," but whatever) — when it comes to protecting the ability of the media to expose lies, he's absolutely the jerk we need right now.