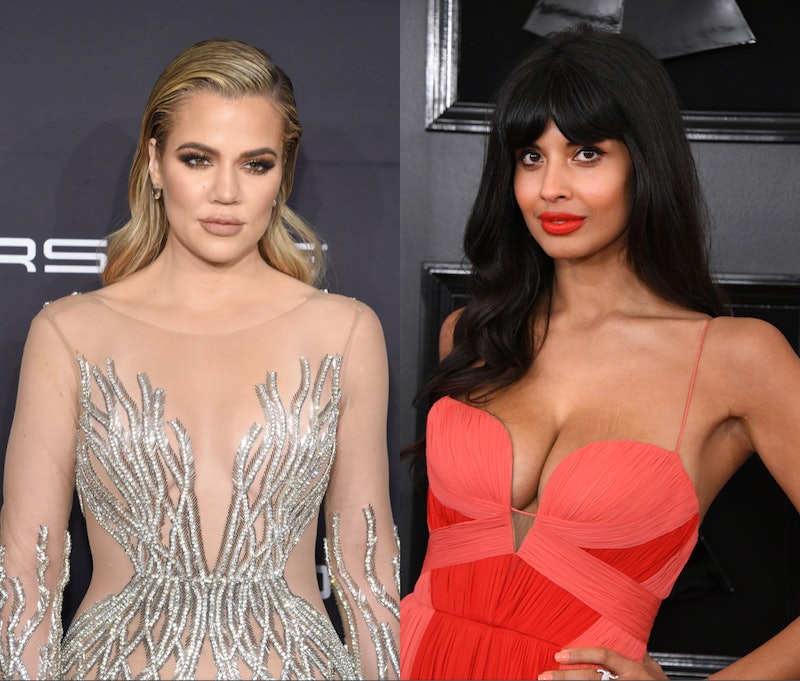 Jameela Jamil will not tolerate appetite suppressants in any shape or form. The Good Place actor is a vocal opponent of diet products that she believes are harmful, including detox teas and appetite suppressant lollipops, and has repeatedly criticized celebrities who promote these products on Instagram. Even The Kardashians are no exception. In fact, Jameela Jamil commented on Khloé Kardashian’s latest Instagram post about meal replacement shakes, and she did not mince words.

On Wednesday, March 20, Kardashian shared a mirror selfie of herself on Instagram in a paid post. Flashing her flat stomach, the reality star wrote that she had added meal replacement shakes to her diet two weeks ago and that “the progress is undeniable." As reported by BuzzFeed, Jamil responded to the post, writing:

"If you're too irresponsible to: a) own up to the fact that you have a personal trainer, nutritionist, probable chef, and a surgeon to achieve your aesthetic, rather than this laxative product...And b) tell them the side effects of this NON-FDA approved product, that most doctors are saying aren't healthy [...] then I guess I have to.”

Jamil's comment appears to have been deleted, and Bustle reached out to a representative for Jamil, who had no comment.

The actor reportedly went on to name the potential side effects of meal replacement shakes, including cramping, stomach pains, and dehydration. However, she also explained that the post is not entirely Kardashian’s fault and slammed the media for portraying negative body stereotypes, stating that the star is a victim of the industry’s botched standards.

“It’s incredibly awful that this industry bullied you until you became this fixated on your appearance,” she said. “That’s the media’s fault. But now please don’t put that back into the world, and hurt other girls, the way you have been hurt.” She ended her comment with a relatively civil and encouraging message for Kardashian. “You’re a smart woman. Be smarter than this.”

On Thursday, March 21, Jamil seemingly responded to the buzz surrounding her comment and promised to never back down on calling out diet products. "There are very young people you are hurting here, and I’m doing this for them," she said on Twitter, completing her statement with a very apt emoji.

This isn’t the first time that Jamil has criticized Kardashian and the media for their diet promotions. Back in January, Jamil responded to a weight loss quote that the reality star posted on her Instagram stories, saying on Twitter, "This makes me sad. I hope my daughter grows up wanting more than this. I want more than this." At the time, the actor felt that Kardashian had been "fat shamed" and sent her well wishes to the star. "Sending love to this poor woman. This industry did this to her. The media did it to her. They fat shamed her into a prison of self critique. Dear girls, WANT MORE THAN THIS," she wrote.

Although she has repeatedly gone after Kardashian for promoting diet products online, Jamil doesn't have an issue with her or the family directly. The self-coined "feminist-in-progress" has also criticized Iggy Azalea and Cardi B for advertising these products. The actor has even made a parody of celebrity advertisements for diet products and posted it to her Instagram, showing how far she is willing to go to warn followers about their potential dangers.

But there's no love lost on Jamil's part for any of these ladies. Speaking to Entertainment Tonight in January, the actor said that she still loves and respects all of them — she just really hates detox teas! "I think I'm slowly but surely making it too disgusting and too embarrassing to promote those teas for everyone," Jamil said. "And then we could all live happily ever after!" Hopefully, that day will come soon.