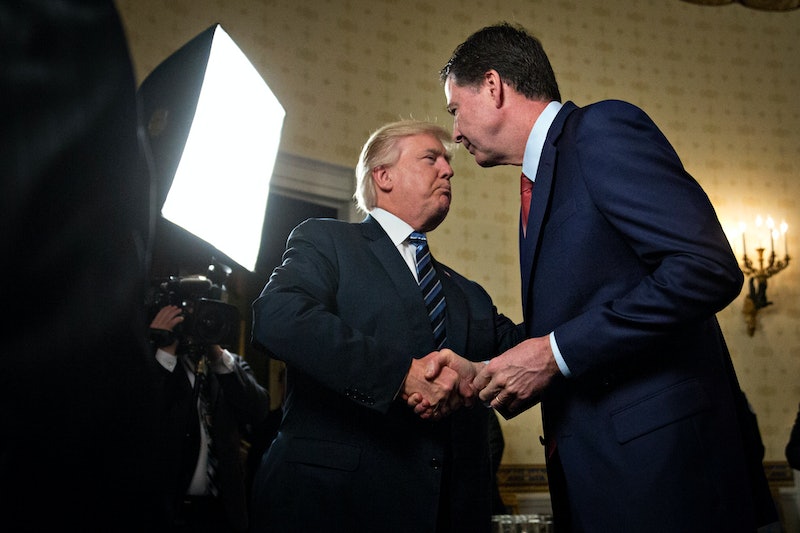 On Wednesday, the former FBI director published a fiery New York Times op-ed, and one comment in particular might catch your attention. In his op-ed, James Comey criticized Bill Barr, suggesting the attorney general was unable to stand up to Donald Trump because, according to Comey, the president essentially eats people's souls.

"How could Mr. Barr, a bright and accomplished lawyer, start channeling the president in using words like 'no collusion' and F.B.I. 'spying'?" Comey wondered in the op-ed. "And how could Rod Rosenstein, the deputy attorney general, after the release of Mr. Mueller’s report that detailed Mr. Trump’s determined efforts to obstruct justice, give a speech quoting the president on the importance of the rule of law?"

The answer, Comey concluded, is that "proximity to an amoral leader" like Trump renders "accomplished people lacking inner strength" — apparently such as Barr or Rosenstein — unable to "resist the compromises necessary to survive Mr. Trump."

Comey then contrasted Barr and Rosenstein's actions with those of former Defense Secretary James Mattis, whom he applauded for resigning from the Trump administration "over principle." In his resignation later, Mattis told the president that he was stepping down because Trump had "the right to have a Secretary of Defense whose views are better aligned with" his own on foreign policy and other issues. According to Foreign Policy, Mattis stayed in his role longer than many expected him to, though he was reportedly at odds with the president for months over his treatment of allies.

Unlike Mattis, Comey thinks that Barr and Rosenstein felt the need to make themselves "be seen as on [Trump's] team," arguing that they have compromised more and more of their integrity in order to do so.

"Accomplished people lacking inner strength can’t resist the compromises necessary to survive Mr. Trump and that adds up to something they will never recover from," Comey added.

Deferring to Trump is a gradual process, Comey suggested. First, his appointees become complicit when Trump tells a lie and they don't contradict him. Then, he makes assertions about what "everyone thinks," and those around him don't challenge him. Comey himself was a victim of this, he wrote, during a private dinner on January 2017 — a dinner that made headlines months later because Trump had reportedly demanded Comey's loyalty, per The New York Times, though Trump denied doing so, and recalled the dinner differently.

Ultimately, "Mr. Trump makes everyone a co-conspirator to his preferred set of facts, or delusions," Comey wrote. His appointees make it seem as though they agree with his commentary in private and show "personal fealty" to him in public. Mattis never directly praised Trump, Comey pointed out, but perhaps he got a pass because he is a former Marine general. As people like Barr and Rosenstein work harder and harder to stay on Trump's team, Comey concluded, it is too late, because Trump "has eaten your soul."

Comey's op-ed was published on the same day that Barr testified before Congressional officials about his handling of Special Counsel Robert Mueller's Russia probe report, USA Today reported, after Mueller and many Democrats criticized Barr for his summary of the report.