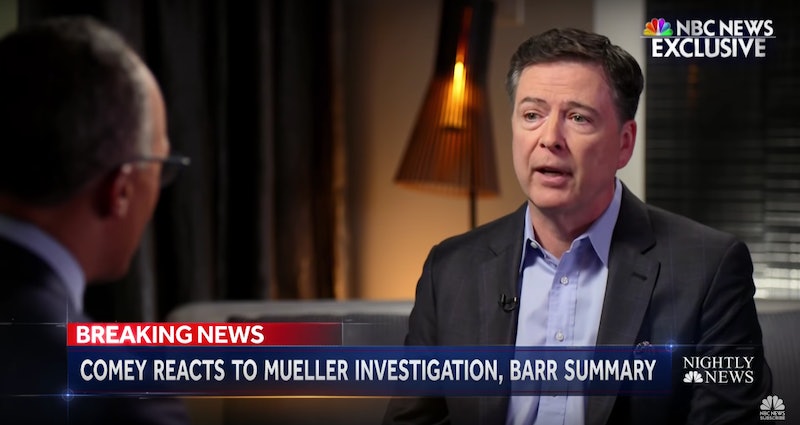 In an interview with NBC's Lester Holt that aired on Wednesday evening, James Comey said his Mueller report questions were all related to one thing. Specifically, they were all about Special Counsel Robert Mueller's decision not to make a ruling on whether President Trump tried to obstruct justice or not. Given his role as the former FBI director who started the Russia investigation to begin with, Comey had plenty to say about what happened after he left.

"You've led this investigation from the start," Holt said. "Were you stunned [with the results]? Did you expect it?"

Comey explained that because of his firing, he had no idea what to expect of the report, since it wasn't close to finished when he left. "We don't investigate ... to find a particular result. We investigate to find out what's true. And as best as I can tell, it looks like Bob Mueller was allowed to do that, and that's a great thing."

It was certainly his charge in general to investigate, and — if he could — to come to conclusions. I don't know why he didn't here, and I don't know what combination of law and fact led him to that, which is why I'm going to wait and hear the explanation, which I hope will come.

Comey also acknowledged a moment that he personally believed could be an example of obstruction of justice: Holt's 2017 interview with Trump which took place shortly after Comey was fired. In that interview, Trump said to Holt,

I was going to fire Comey, knowing there was no good time to do it. And in fact, when I decided to just do it I said to myself, I said, you know, this Russia thing with Trump and Russia is a made-up story.

Trump said later in the interview, "He's the wrong man for that position." Just under two years later, Comey explained how he felt watching that interview. He said, “[I] thought, ‘That’s potentially obstruction of justice and I hope somebody is going to look at that.’” Comey clarified that he had no idea what Trump's thought process might have been at the time, but that what Trump “[appeared] to be saying is, 'I got rid of this guy to shut down an investigation that threatened me.'"

Regardless of Comey's concerns about obstruction of justice, he insisted that the Mueller report was a good thing for the American people. He said:

I think it’s good that [Mueller] was able to finish the work and establish both that the Russia thing wasn’t a hoax - that the Russians interfered in the election in a huge way, and that’s really important ... And then another piece of good news, the evidence didn’t establish that any Americans conspired as part of that effort. That should be good news no matter what party you’re associated with.

But when it comes to obstruction, he still expects more answers, as evidenced by the post he tweeted after the Mueller report summary was released to Congress. Alongside a photo of him in a forest, he simply wrote, "so many questions."